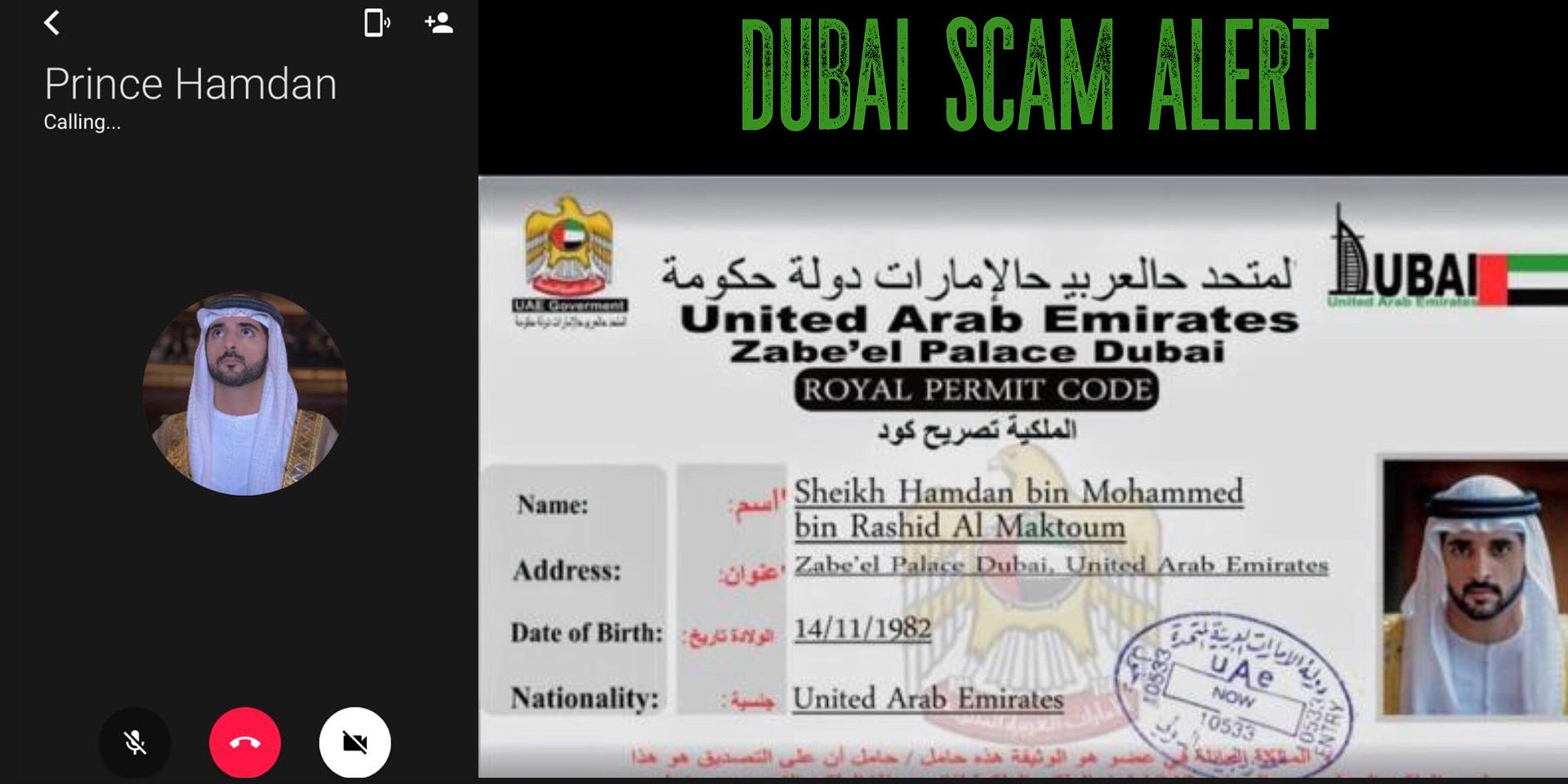 Common Dubai Scams.  A fraud warning by Detained in Dubai

Detained in Dubai is often the first port of call for victims of these scams who seek to validate the authenticity of those requesting money.  The organisation has been issuing fraud alerts for the past several years.  “We see two types of scams.  One is where an online connection develops a friendship or romance, then falsely claims to be detained in Dubai, with some kind of elaborate story.  They ask for funds to be sent to their lawyers or to pay government fines.  We have seen victims part with in excess of one million euros over the past two years and these are only the ones we know about.  The other scam involves the crown prince of Dubai.  In some cases, the character has declared his love for a woman and told her he has wanted to escape his princely duties.  In others, they have given investment advice or asked for charitable donations.  In Aimee’s case, ‘Prince Hamdan’ asked her to send money for a special royal ID card that would allow him to visit her for Christmas”.

‘Prince Hamdam’ approached Aimee’s on Instagram after seeing a post she made about flights to Dubai.  He took an interest in a frivolous case that had been made by her former Landlord in Dubai, saying he could help her solve the case.  He lured her to talk further on ‘Hangouts’, an app notoriously popular with romance scammers.

The two communicated regularly and he indicated he would like to visit her family in Scotland.  He’d provided her with identification and a backstory, talking about his philanthropy and charitable endeavours.

He asked Aimee to send money via Western Union or bank transfer to accounts in Dubai, London, Istanbul and Tel Aviv.  He wanted to visit her but she would need a royal identification and there’s a fee for that.  She was provided with examples of other women who had obtained the ID and given an application form.

Examples of women who obtained ID's. 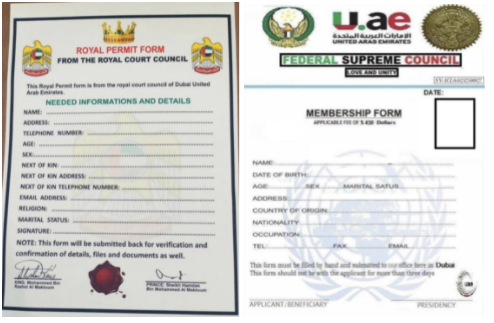 Application for a 'royal permit' that would allow Prince Hamdan to visit Aimee.

Aimee was told to send money to Hamdan’s agents as he could not accept funds directly, given his prominent position.  She was asked to send funds to:

After losing £3,800, Aimee realised she was being targeted by fraudsters, but she kept talking with the group, trying to obtain as much information about them as possible.  She recorded a telephone call to Prince Hamda, seemingly perplexed as to why he might have a Nigerian accent.  “It was ridiculous”, exclaimed Aimee.  “I’m taking it upon myself to warn others about these scams.  There are hundreds of social media accounts still trying to rob people and they can’t get away with it."

“I have dealt with numerous victims of these elaborate Dubai focussed scams”, added Radha Stirling.  "One Austrian woman had sadly lost £350,000 trying to help someone she genuinely believed had been jailed.  These groups are making a significant amount of money.  It’s big business for them and they likely have vast offices, warehouses of scammers scouring social media for victims.

“When someone says they have been detained in Dubai, it’s believable because of the long history of wrongful arrests.  It’s outrageous that these scamsters are profiteering from abusing people with a kind nature”.

Detained in Dubai receives at least one enquiry a month from people asking for help.  “I can spot these scams a mile away but to be sure, we check on case numbers and validate their identity through the embassies.  At this point, we never hear from them again.  I hope that at least we are protecting some people from being scammed, but the UAE’s government needs to do more.  Clearly, there are people operating out of Dubai, pretending to be detained in order to scam victims.  The UAE needs to clamp down on this.  Clearly Instagram and Facebook are doing very little to protect individuals from these scams.  There are hundreds of profiles still operational and they may find themselves liable at some point”.

Here are some examples of queries Detained in Dubai receive:

- “Hi my boyfriend future husband is a US army man and he was on his way home, and he had some gold that his dad had given him before he passed away and he carries it with him, and he was arrested my Dubai immigration, and they want a 3,000 to pay a fine for him to return to the US, I don't have that kind of money to send them, is there a away you can help him, I have the name of his commanding officer and his email.”

- “My fiancé is a USA citizen, and told me he was being detained at the airport before boarding his plane towards the USA territory, but he had some Gold in his luggage, and he was accused of not declaring it. I would like to know if there is a way to find out if he has been detained for that reason, and if that is the case, how to help him? Thank you!”

- “Now the (UAE) Federal government contacted me, they need $150,000.00 U.S.Dollars to release him” “A friend met this guy on the 'net and shortly after was told that he had been arrested in Dubai for something involving pirates and the loss of machinery for his company. This was in August 2017. Money is being requested by a lawyer who has a Gmail email address and I am concerned this may be a scam. Google searches nothing on him, pirates etc.  Any advice on how I can find out if this guy exists?”

Radha Stirling, CEO and founder of Detained in Dubai who has lodged a criminal police complaint against a Gulf News journalist and local attorney for criminal defamation against her in Derrin Crawford case under federal cybercrime laws.