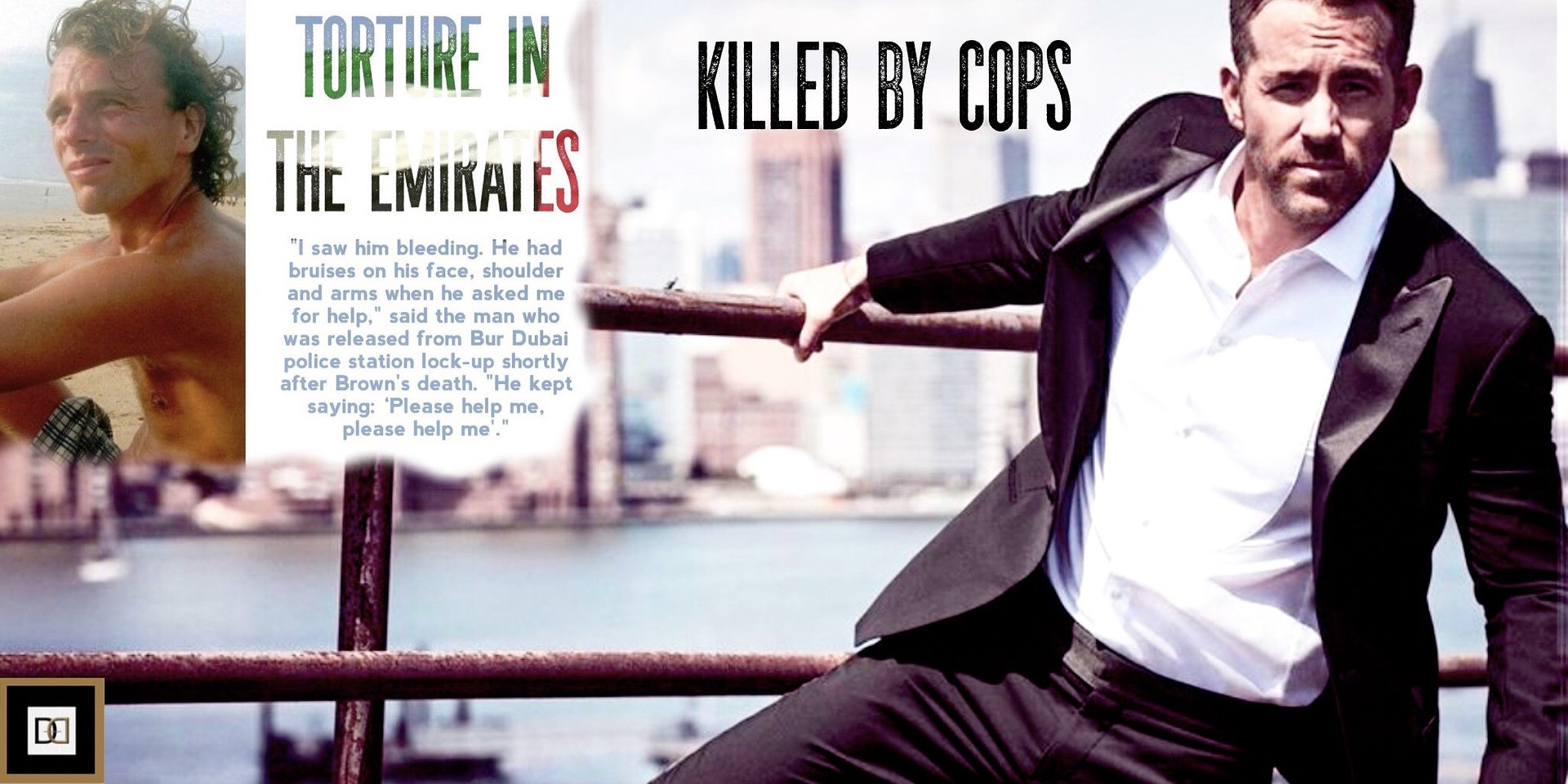 Police brutality commonplace in Dubai while celebrities market the expo

While Ryan Reynolds and various other celebrities take money from Dubai to promote this year’s expo, the more sinister side of the Emirates is being seriously exposed. No amount of celebrity or influencer endorsement can possibly make the past decade’s blood stains look like wine.
“10 years ago, I was telephoned by a clearly distressed British national”, recalled Radha Stirling, CEO of Detained in Dubai, “he told me that a young British man had just been beaten to death by police. He was dead and in his last words, he desperately pleaded for help. The police did not help him, did not take him to the hospital. They left him there to die.
“Although I had known of torture, beatings and abuse in prisons since founding the organisation in 2008, this was the first death in custody of a British national that I had come to know of. I wasn’t surprised though. It was obvious that with the police brutality reports we’d received over the years, eventually someone would die. I knew very well about Aboriginal deaths in custody from Australian police brutality. It was certainly foreseeable.
“Lee Bradley Brown visited Dubai as a tourist. He was arrested for swearing after he reportedly caught hotel staff trying to steal from his room and a few days later, he was dead but not due to an accident, a heart attack or drug abuse. He died at the hands of police who were supposed to protect people, not harm them.

Lee Bradley Brown, 39, was on holiday at a £1,000-a-night hotel in the Arab state when he was thrown into a filthy cell at the notoriously brutal Bur Dubai police station.

“There is no excuse for violence in police stations. Lee was not fighting the police and he was not violent towards them but all the same, they decided to beat him. Dubai’s police changed their stories multiple times, and even had the audacity to claim Lee threw himself violently against the cell wall and to the hard floor’s surface, but none of this was true. There were multiple witnesses who are testifying at the upcoming Inquest but Dubai insisted they would share the CCTV evidence with British authorities. The footage never materialised and the UAE withdrew the offer, despite pressure from the UK, media and courts.
“2022 will be the first time the circumstances of Lee’s death will be truly heard and I hope that with my testimony, witness testimony, the coroner’s report, the UAE’s lack of cooperation and the endless subsequent reports of torture and abuse, that the Brown family will finally hear the truth of what happened to their beloved.

New Inquiry into the death of Lee Bradley Brown, who died in custody just 6 days after his arrest

The UK High Court has ordered a new inquirty into the death of Lee Bradley Brown, who died while in police custody in Dubai. Lee's family and friends have insisted that he was murdered and have etablished a facebook support group called "Justice for Lee Brown, murdered by cops in Dubai". The original reports and accounts of what caused Lee's death were quite conflicted and no serious inquiries were conducted to conclusively resolve the cause. We hope that the fresh investigation will conclusive

“The fact that the UAE has gone unpunished for this crime against a British national, has only emboldened them to continue their abuse against our citizens. We have a long list of Brits who have been forced to confess, tasered, beaten, tortured and abused by prison guards and police. The UK has not enforced human rights standards against the UAE but has rather, like Ryan Reynolds, opted to take the money. That money however, has come at the cost of ordinary citizens.
“Billy Hood was arrested over CBD oil, forced to confess, tasered and beaten in police custody. Matthew Hedges complained of his own torture when accused of being a British spy and grandfather Albert Douglas requires multiple further surgeries after suffering dislocated and broken bones from being beaten by authorities.”

The UAE has arrested dozens of foreigners for 'crimes' like having a poppyseed on the bottom of one's shoe, having prescription medicine, residual hashish from marijuana smoked abroad, a glass of wine on a plane and so on. Tourists and expats are at great risk of police set ups and sting operations. The FCDO has been asked to increase travel warnings to citizens. A 24 year old semi-pro footballer and coach from Kensington, has been sentenced to a whopping 25 years after Dubai police discovered

In a telephone call shared with the Sun, Albert described the abuse he has suffered and witnessed and that he is in prison with one of the witnesses of Lee’s murder. What has changed since Lee’s death? Stirling explains, “There has been overwhelming evidence and testimony of perpetual human rights abuses within the UAE, so perpetual that even Dubai’s own royalty have broadcast their personal shocking experiences. The UAE has been the subject of ongoing scrutiny, multiple United Nations investigations, the English and Scottish courts have refused to extradite citizens based on the ‘real risk of torture, human rights abuses, unfair trials and discrimination’, the English courts ruled noted that Sheikh Shamsa and Latifa had been kidnapped, the European Parliament has boycotted Dubai’s expo and political influencers like Lady Whitaker have called for sanctions.

A British national has been admitted to a Dubai hospital for surgery to repair a dislocated shoulder sustained in prison, after being incarcerated over bounced cheques he didn’t write. Londoner Albert Douglas, 60, was handed a £2.5 million fine after his son Wolfgang's company failed in 2019, despite committing no crime and having no role with the firm. Albert lost an appeal and tried to flee the prison with the help of people smugglers, but he was caught at the border and given a three-year sen

“What we have achieved since Lee’s death is substantial, finally inspiring MP’s to debate whether the FCDO is doing enough to protect citizens from abuse in the UAE. These accomplishments in themselves, should pressure change in the UAE and this time, it needs to be for real. No more glossy cover ups, no whitewashing, no fake assurances.

The FCO is broken

The first thing most foreign nationals do when they experience problems abroad is to contact their embassies. It is fair to say that people expect their countries’ diplomats to swoop in and protect them with all the weight of their governments behind them, particularly citizens of Western democracies. The experience of British nationals in the UAE could not be further from this expectation. “You are actually on your own,” says Jamie Harron, a British citizen who was detained in the UAE 3 years

“The UAE’s Western allies need to ensure their partner respects and preserves our fundamental human rights”.
The Coroner’s Inquest into Lee Bradley Brown’s death is scheduled to take place in January 2022.
Join our Telegram group for instant press releases, breaking news and alerts:

Look at our Lee Bradley Brown section on Detained in Dubai:

Lee Bradley Brown died in custody due to Dubai police brutality. 2021: Radha Stirling is giving evidence in new Inquest into his death.

Detained in Dubai reflects on 14 years of service