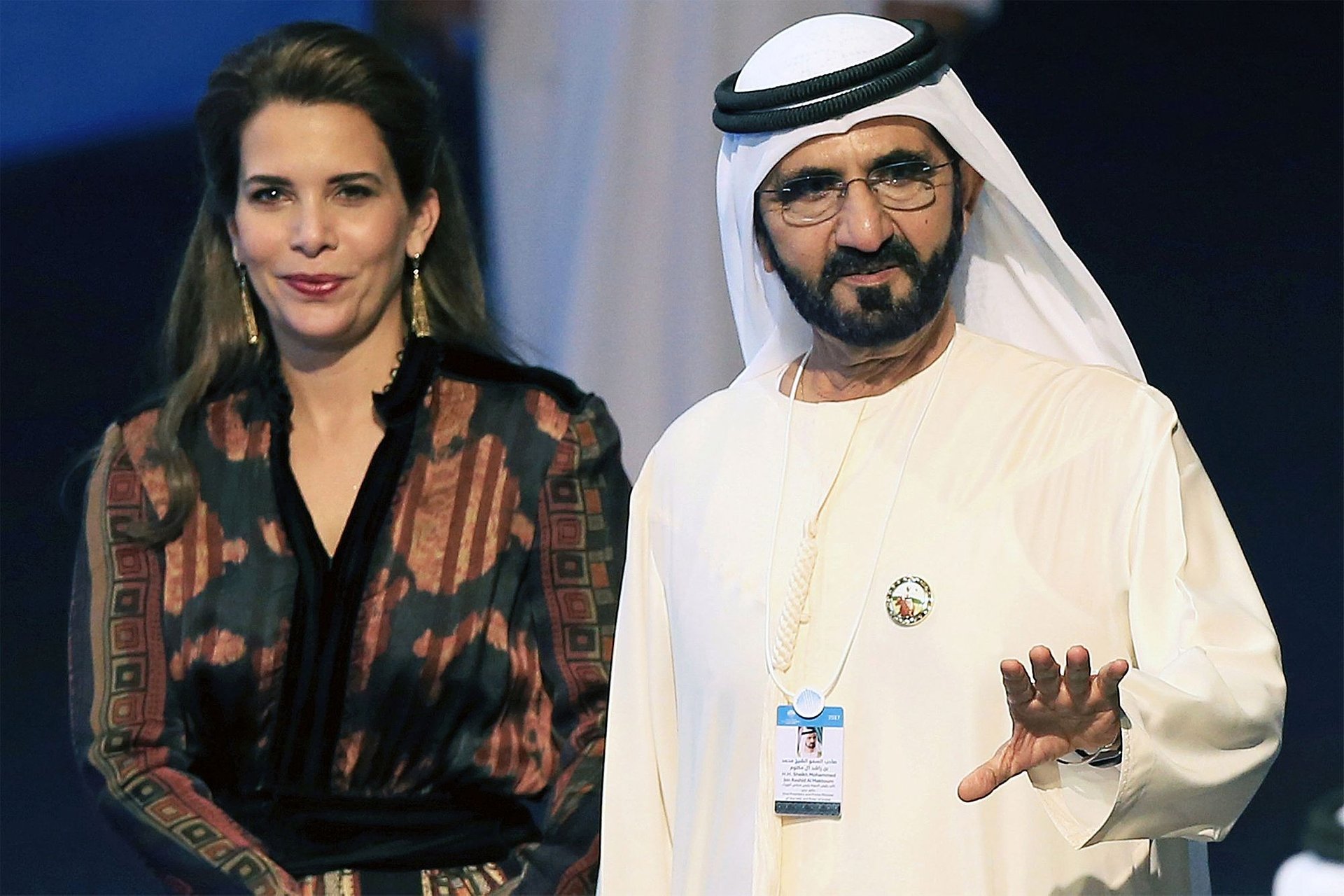 Sheikh Mohammed has applied to the English High Court for custody of his two children from Jordanian wife Princess Haya after their separation was confirmed in the media.Leaked information from Haya’s side indicated that she was in fear for her life, the lives of her children and had possibly initiated the separation after discovering “disturbing facts” about Princess Latifa, her stepdaughter who had fled Dubai in February last year. The opposing narrative has been that Princess Haya fell in love with a British security officer and had “been unfaithful”.

Radha Stirling, CEO of Detained in Dubai was contacted directly by Sheikh Mohammed’s daughter, Princess Latifa during her escape on the suggestion of US/French national and former French secret service agent Capt. Hervé Jaubert, who helped the princess flee the country. Latifa told Radha that she had escaped Dubai and was seeking asylum in the United States.
She cited a number of reasons for her decision, including oppression and human rights abuses and explained that her sister Sheikha Shamsa was “in a bad state” after her own foiled attempt to escape the family; but she hoped she would be better able to help her sister from outside of Dubai. On the 4th of March 2018 however, her plans for freedom came to a dramatic end when Jaubert’s US flagged yacht Nostromo, was attacked by military forces in international waters. Despite her desperate pleas for asylum to the Indian military forces, she was returned to Dubai where she has remained since.
Stirling initiated a series of actions including a United Nations investigation into Latifa’s welfare and until now, the inquiry has been met with silence from the UAE.
Stirling said “In December last year, in response to the release of BBC documentary ‘Escapefrom Dubai’, Princess Haya took the initiative to contact her friend and former Irish president Mary Robinson to help alleviate public concern over Latifa’s safety. In what appeared to be a stage PR stunt aimed at circumventing United Nations protocol, she attracted criticism from Detained in Dubai and Human Rights Watch leading to Princess Haya’s lengthy interview with RTE’s Marian Finucane. Princess Haya explained that Latifa’s situation was a “private family matter” and that if she had any concern whatsoever for Latifa’s safety, she “would not stand for it”.
“With leaked information emerging that she since discovered disturbing facts over Latifa’s treatment, English court proceedings have reignited the need for cooperation with the United Nations. In the adversarial system of law, and where the custody of children is involved, family court battles are notoriously brutal which is not necessarily in the best interests of the children. The initial hearings have given Sheikh Mohammed a preview of just how harsh the process is likely to be. With Princess Haya’s legal team already having applied for a non molestation order and a forced marriage protection order, Sheikh Mohammed would be well-advised by his own legal team to finally cooperate, sooner rather than later, with the United Nations investigation into Princess Latifa’s safety”.
Stirling, on behalf of Princess Latifa, appointed acclaimed Queen’s Counsel John Cooper to reinvigorate inquiries into Latifa’s wellbeing. Cooper commented on the situation “It is in the interests of Sheikh Mohammed to cooperate with the United Nations who seek only to confirm that Princess Latifa’s human rights are being preserved. Cooperation would alleviate the growing public concern and better support his custody disputes in England.”
Stirling added “While the ruling family may find submitting to an inquiry invasive, Latifa herself rendered the matter of public interest, and thus it needs a publicly scrutinised resolution.“The growing public concern regarding the treatment of women in the royal family can not be taken lightly and can not be dismissed without consequence. A custody battle in the English courts is highly unlikely to be successful while there are unaddressed allegations against Sheikh Mohammed by his own daughter, amplified by Princess Haya’s submissions”.
Barrister Matthew Heywood of 1 Crown Office Row, who has been appointed by Stirling as Junior Counsel, said “Cooperation with the United Nations is a must for Sheikh Mohammed. English Judges would be reluctant to order the children to return to Dubai, while there are unanswered allegations from other children claiming to have suffered abuse and torture.”
Stirling continued “Proceedings are expected to be lengthy, and while an out of court settlement is not off the table, it is clearly not imminent. Latifa’s escape has inspired women who have been abused and oppressed in the Middle East to seek their own freedom, and the outcome of this United Nations investigation and Princess Haya’s custody proceedings will have a ripple down effect for women in the gulf region. Ultimately, change is inevitable and these cases have the potential to be the catalyst.”

Acting as Sheikha Latifa Al Maktoum’s legal representatives, Detained in Dubai and Captain Hervé Jaubert have instructed internationally renowned barrister John Cooper QC of 25 Bedford Row to advise in their ongoing case with the United Nations on behalf of the Dubai pri...

The first hearing in the case of Princess Haya and Sheikh Mohammed bin Rashid Al Maktoum, Princess of Jordan and Ruler of Dubai, respectively; is set for the end of this month. Haya fled the UAE and her marriage several weeks ago, with Sheikh Mohammed filing a suit for c...