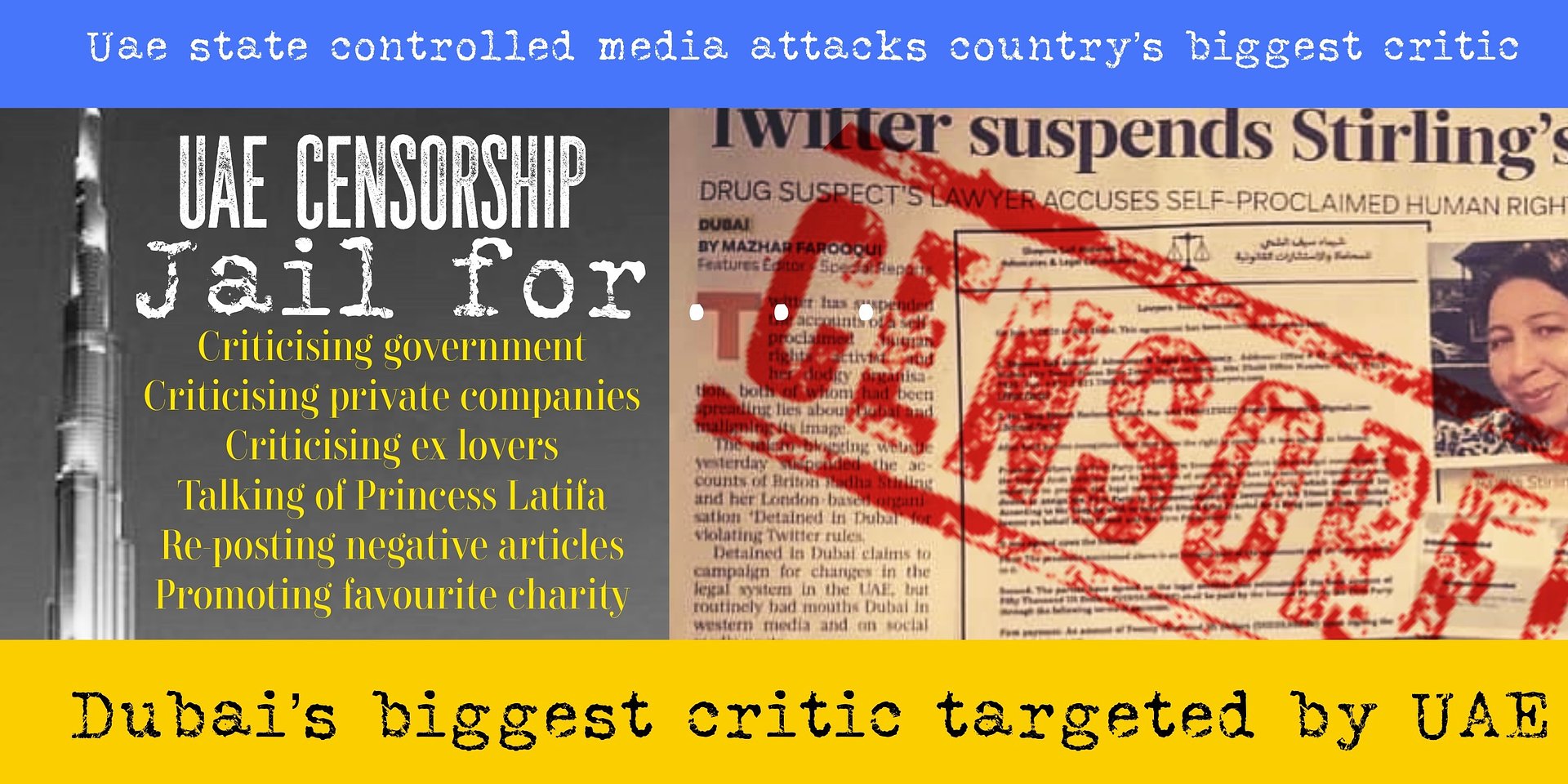 Social media censorship is becoming a topic of increasing concern, particularly on platforms such as Twitter and Facebook.  The recent suspension of all Twitter accounts associated with the rights group Detained in Dubai, while Dubai hosts the company’s Middle East headquarters, is distinctly unsettling.
Media in the UAE is rigidly controlled by the government, and Detained in Dubai’s website has long been blocked in the Gulf nation. Founder and CEO of the organisation, Radha Stirling has been campaigning for the rights of wrongfully accused and detained expats in the Emirates for over 12 years, and is the person Princess Latifa Al Maktoum (daughter of Dubai’s ruler Sheikh Mohammed) reached out to during her escape, specifically because Stirling is the leading international voice for justice in the UAE.  On July 17th, without warning, Twitter suspended Stirling’s personal account, the Detained in Dubai account, and other accounts run by the organisation dedicated to human rights and legal abuse cases in the Gulf.
Skyline International, an organisation which advocates for freedom of opinion on social media, said in a statement: “Twitter should assume its responsibility to identify violations of its regional headquarters in Dubai regarding freedom of opinion and expression against opponents of governments of regional countries.”
“Twitter has become a vital platform for disseminating information about human rights violations and raising awareness about individual cases of legal misconduct in the UAE,” Stirling commented, “Particularly for journalists, our accounts have been a primary source of news.”  It is believed that Detained in Dubai’s accounts were targeted precisely to hinder their work in exposing injustice in the Emirates.

High-level coordination between the UAE, Saudi Arabia, Egypt and Israel on the prosecution and deletion of the accounts of human rights activists, journalists and opponents of those governments” was behind the suspensions.

Skyline International explained in their statement

Middle East Monitor reported that, according to the rights watchdog, the Israeli company NSO and the UAE have been closely cooperating “in targeting dozens of human rights defenders, journalists and other civil society activists in different parts of the world, especially in the Middle East”.

A rights group yesterday called on Twitter to open an urgent investigation into the transparency of its regional office in the UAE as well as the nature of its relations with authorities in the countr...

“The UAE is highly sensitive about their international image, and that image has been severely tarnished over the past several years,” Stirling noted, “An unending series of high profile cases highlighting the UAE’s arbitrary enforcement of often vague laws, forced confessions, false arrests, and wrongful detentions, in addition to the shocking events around the Latifa case, and then Sheikh Mohammed’s child custody battle in the UK with his estranged wife Princess Haya; have all seriously damaged the country’s reputation.  Rather than focusing on improving the legal system and adhering to international standards of due process, Dubai seems to reflexively respond to criticism and exposure simply by trying harder to block access to information and control the flow of news.”
Stirling further explained that the UAE has increasingly made attempts to expand their authority beyond their territorial jurisdiction in a variety of ways, including abuse of the Interpol Red Notice system and the criminalisation of online activity undertaken outside the country.  She pointed to the case of British citizen Laleh Shahravesh, who was arrested upon landing in Dubai over a Facebook post she had made while in the UK. By using the Twitter office in Dubai, the UAE can potentially impose government censorship on a global platform.
“It is quite disturbing,” Stirling said, “Not just for our work, but for what it signals in terms of the control of information over the years to come.  The UAE is an authoritarian country, freedom of speech is not a principle enshrined in their legal system; news is tightly managed and censored; Cybercrime laws are regularly used to punish even the most trivial criticisms.  Giving the UAE any degree of authority over a platform of free expression used by people around the world is counter-intuitive, to say the least.”
An online petition was created by Skyline, calling for the reinstatement of Stirling’s Twitter accounts, and a group of Detained in Dubai’s former clients, whom the organisation helped free from wrongful detention, has started a new Twitter account to ensure Stirling’s work can continue to reach the public and media.