Dubai police arrest American man for possession of hashish consumed OUTSIDE the UAE
It’s happened again. Dubai’s strict drug laws prohibit the possession of hashish/marijuana, but possession there, includes carrying drugs within one’s bloodstream. That means visitors to the UAE who have consumed hashish/marijuana legally in their own country, can be arrested for possessing hashish in their blood when they get to Dubai. This is exactly what happened to 51 year old Silicon Valley veteran, Peter Clark, who faces three years in a desert jail.
Las Vegas resident Peter Clark flew to Dubai on the 24th of February 2021 for a few days to assess professional recording studios, but was admitted for emergency hospital treatment after falling ill with pancreatitis. Before discharge, the hospital took a urine sample to test for drugs and found residue traces of hashish. They dutifully reported their findings to police who promptly turned up to the hospital to charge Peter, who was still in a drowsy state, having not been able to eat or drink since he was admitted. On the 3rd of March, Peter was handcuffed and taken to Al Barsha police station, where he was put in a detention cell with three other men. He didn’t understand why he had been detained. He had not brought any drugs into the UAE, purchased or consumed any drugs in Dubai. He knew the law.
Still feeling extremely unwell, having suffered hyperglycemia and respiratory alkalosis with a blood sugar level more than ten times what it should have been due to the pancreatitis, Peter was then taken to the Anti-Narcotics unit and thrown into a filthy cell with at least ten other men arrested for drug possession. The hospital had provided a number of medications (including antibiotics) for him to continue but the police denied his repeated requests for help, causing the vein in the crook of his left elbow to become infected from the multiple IVs the hospital administered.
On the 6th of March, Peter was released from his flea ridden cell and told to return to his hotel and await their contact. Over a month later, Peter is still in Dubai and without intervention, faces years in prison.
“The UAE’s arbitrary enforcement of laws and lack of predictable legal outcomes means that Peter potentially faces years in prison for legally smoking marijuana. Even if found innocent, he can be dragged through a slow and costly legal process”, said Radha Stirling, founder of Detained in Dubai, who is representing Mr Clark.
“Visitors to Dubai who have planned for a short stay holiday can end up embroiled in a system that will easily cost them $50,000 - $100,000 in hotels and legal fees but some outcomes are even worse. Corrupt police informants have been used by the prosecution to upgrade possession cases to that of drug dealing, which carries a life sentence. British national and military veteran Andy Neal, was jailed for more than a year on false drug dealing allegations, before finally being exonerated after our Detained in Dubai campaign.
“The UAE creates the illusion of being a modern party place and although visitors accept that certain behaviours are illegal, it is very easy to be confused when police only randomly enforce the law. On the one hand, prostitution, homosexuality and indecent behaviours are unlawful, and yet they are seen more blatantly in Dubai than most other world cities. It is easy to see how visitors might be trapped into believing that anything goes and the police will turn a blind eye.
“The UAE should not be prosecuting visitors for acts committed outside their country. Peter has committed no genuine crime within Dubai. It is clear that the UAE must alter the technical wording of their drug laws to ensure foreigners are not unnecessarily persecuted.
“We’ve seen foreigners arrested for drugs taken outside of the UAE, specs of almost undetectable marijuana ‘dust’ at the bottom of belongings, a poppyseed from a bread roll consumed at the airport, pharmaceutical and prescription medicine, and even a glass of wine served onboard Emirates airlines. Arresting someone for smoking marijuana in their own country, weeks before they even entered the UAE, is unfairly persecuting tourists who have behaved well within Dubai itself. The US State department needs to revise travel warnings to Americans who could end up arbitrarily detained”.

Connor Clements, a young British man who was arrested in the UAE for traces of medical marijuana that were left in his system after legally taking it in the UK, has been dealt another blow. Connor has a medical form from John Lycett Green, the founder of Medical Marijuana UK explaining that Connor was legally taking Sativex spray and CBD Oil for anxiety. Mr Green advised Connor to get a stamp from the British Embassy on the form, but so far the embassy has not responded to the request. This is i

In a video recorded in the taxi from detention to his hotel, an exhausted Peter said “I’ve lost a tonne of weight. No shower, no food, nothing to drink since I got here. No sleep.”
Stirling added, “The police told Peter they were taking him back to his hotel from the hospital but instead they took him to Al Barsha police station and locked him up. Since being bailed, he’s had to move from hotel to hotel. The police kept calling him and asking him to come and collect his passport, teasing him that he would be freed or deported, but they were luring him to the station to interrogate him, to take mugshots and fingerprints and to hold him in a cell for days. There does not seem to be an end in sight and cases like this can go south quickly.
“It’s imperative the US Embassy get involved and speak with their counterparts at the UAE’s foreign office. The UAE and US have strong diplomatic ties and the UAE is America’s closest ally in the Middle East. But ties have been strained after the UAE led attack on a US flagged yacht, violations of Iran sanctions by Ras Al Khaimah and the hacking of US nationals. The United States needs to ensure that citizens who visit the Emirates are safe from legal abuse”.

Vigilance Security Magazine is here to inform, educate, disseminate information and entertain its numerous audiences about security matters in a reader-friendly

UK veteran Andy Neal was arrested in Dubai in late 2018 on the basis of an informant. Despite there being no evidence of drugs in his bloodstream, or in his possession; and despite the informant recanting his identification of Andy, the distinguished soldier was held for over a year and subjected to continuous efforts to coerce a false confession. Andy was recently exonerated of the allegations, and has just returned home to the UK. Radha Stirling, CEO of Detained in Dubai, who represented Andy,

Derrin Crawford's family say the 23-year-old tested negative for drugs but is still in jail. 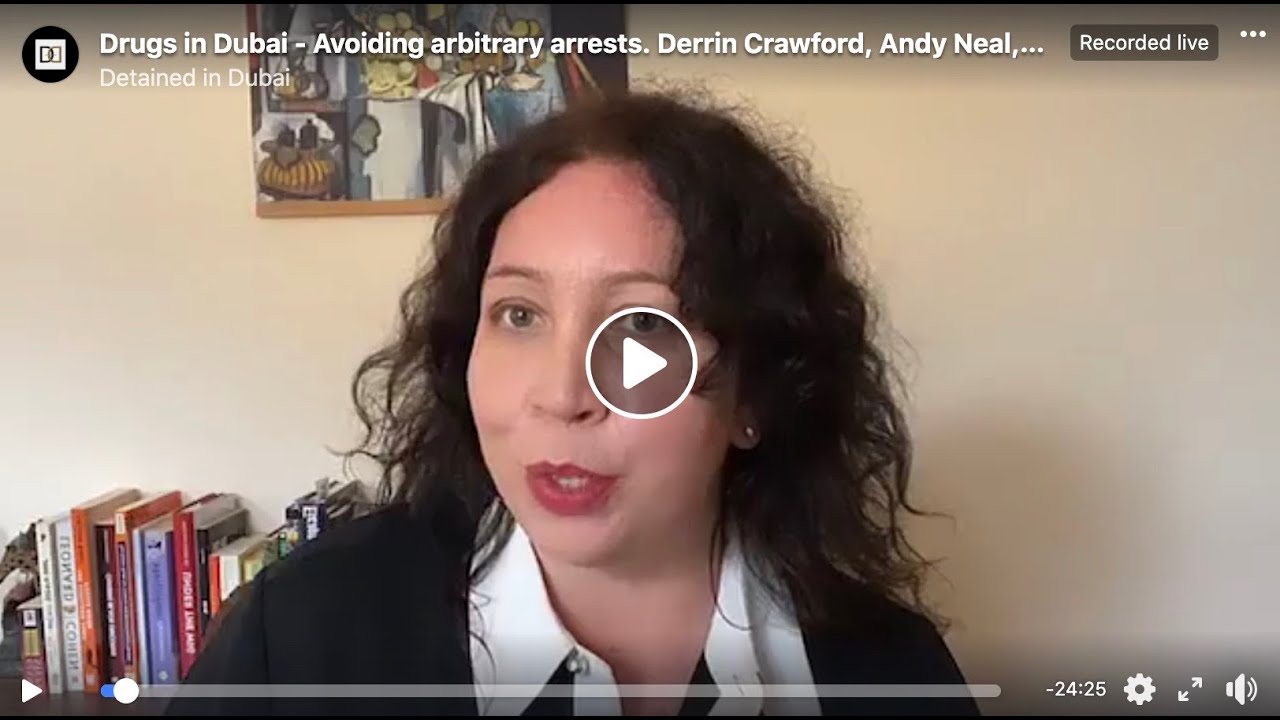 American on holiday is detained in Dubai for criticising Egypt