Press Release: FCO talks to grandfather beaten & forced to drink from toilet in Dubai jail
60 year old Albert Douglas testified to being beaten and forced to drink out of the toilet while watching prisoners being hung upside down and beaten.
The contents of a disturbing telephone call has been released on the Gulf in Justice Podcast and shared with the FCO with a plea from Albert’s desperate family to end the abuse of British citizens in the UAE. “There is only one rule, there are no rules”, explained Albert Douglas, when discussing the notorious prison where numerous others have testified as to their abuse.

Albert Douglas, from London, has been wrongfully jailed for his son’s business debts that would be treated as civil claims in the UK. His own business and life’s work has been destroyed as a result of the proceedings. The family tried everything to try to resolve the cases, but were met with a shambolic judicial system.
Now, Albert has been denied his heart medication and beaten by prison guards for asking. He was forced to drink from the toilet after being deprived of food and water for several days. “We are absolutely outraged by this treatment and so is Albert’s family. It’s degrading, inhumane and criminal”, said Radha Stirling, CEO of Detained in Dubai. “This is not an isolated incident. Matthew Hedges and Artur Ligeska were abused in prison. Artur took more than a year to repair his broken body after being raped and tortured. 22 year old Lee Bradley Brown was killed in Dubai police custody. I remember the phone call from his cellmates who witnessed him being beaten to death. I was equally shocked when Princess Latifa contacted me during her escape and told me of her abuse and torture. It is absolutely unacceptable that an ally of the United Kingdom, a trade partner and a holiday destination for citizens, continues to force confessions, lock innocent people up, violate human rights and torture our citizens.
“The Canadian government intervened to rescue André Gauthier and bring him home last week. The UAE authorities investigated his case and exonerated him of the criminal charges against him. The FCO needs to ensure Albert’s speedy return to his family in the UK. This simply can’t go on”, added Stirling.
The family organised a peaceful demonstration in London on Saturday that saw several hundred supporters call on authorities to #FreeAlbert and to #BoycottDubai. Albert’s detention has attracted significant celebrity support and continues to escalate. His case highlights so many other instances of injustice. “We encourage the UAE authorities to review this case of injustice. He should never have been arrested in the first place and subjected to these abuses”.
At the Parliament Square demonstration, Sunday Times ‘rich list’ entrepreneur and TV star Alfie Best, called for the release of Albert, criticising the human rights violations and beatings, adding ‘Gypsy Lives Matter’. The campaign has been supported by celebrities and influencers like Claire Sweeney, Henry Simmons & Daisy O’Donnell. “With close connections to the boxing community, we expect more voices to join the effort”, said Wolfgang Douglas, Albert’s son, who has been tirelessly campaigning for his father’s release. 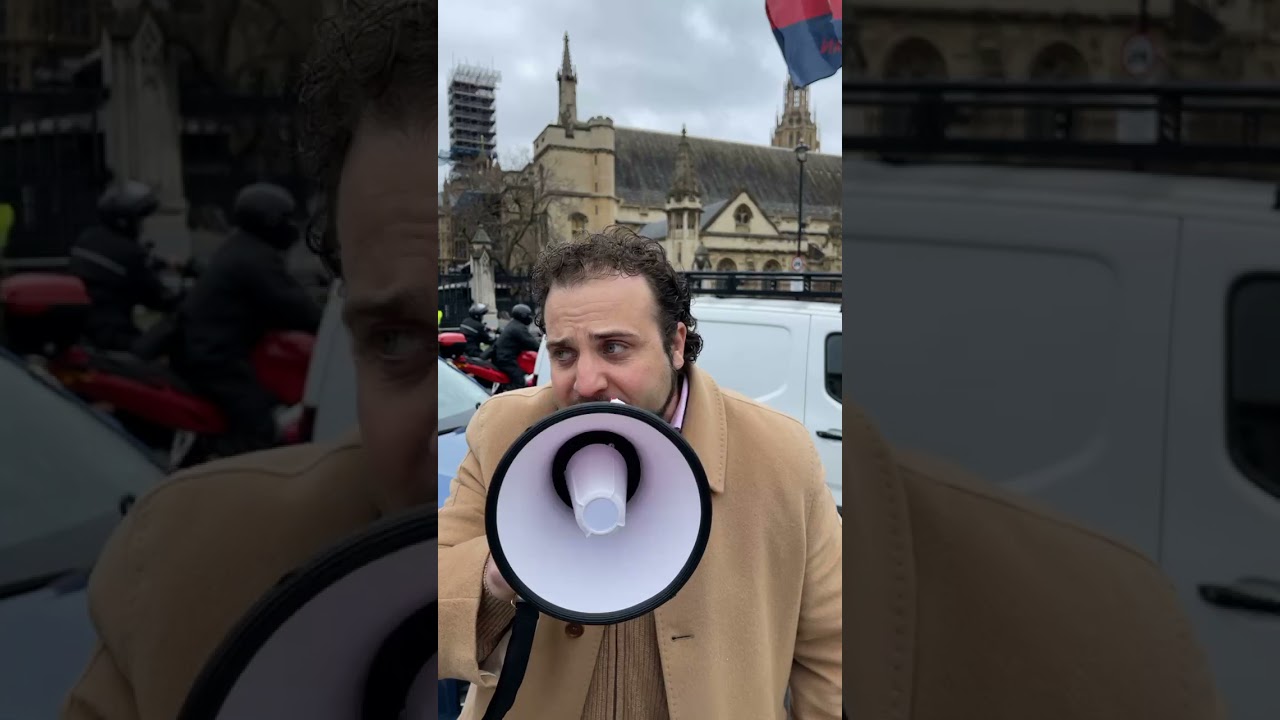 Alfie Best and Wolfgang Douglas speak in London at a demonstration to Free Albert Douglas, grandfather who has been detained in Dubai.

“We have been in touch with the relevant diplomats in the UK and UAE and fully support efforts to review the cases against Albert. Return him home where he can recover and quietly pick up the pieces of the life his son says has been destroyed. His community will not stop until he is home.” added Stirling. 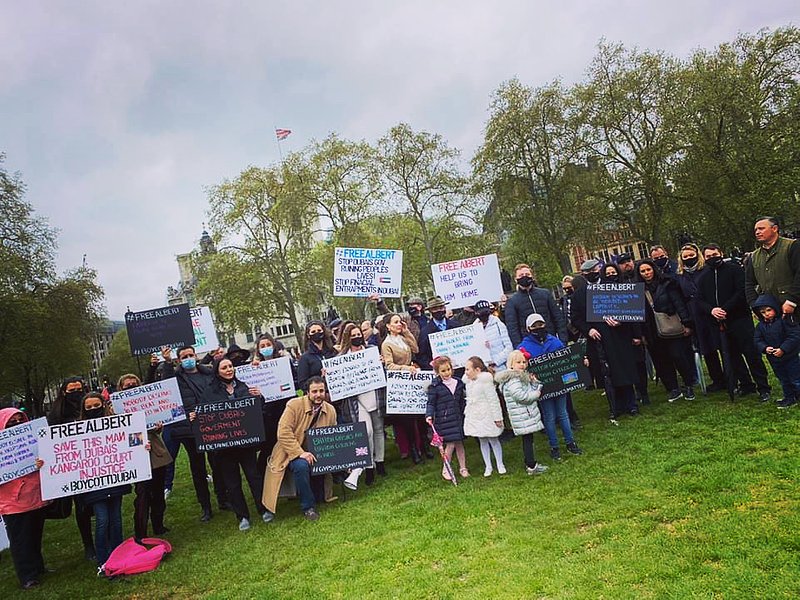 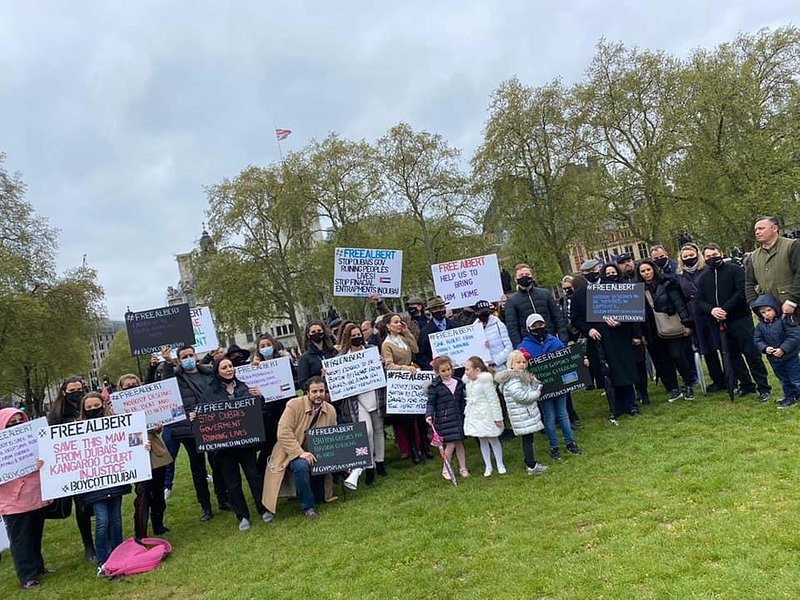 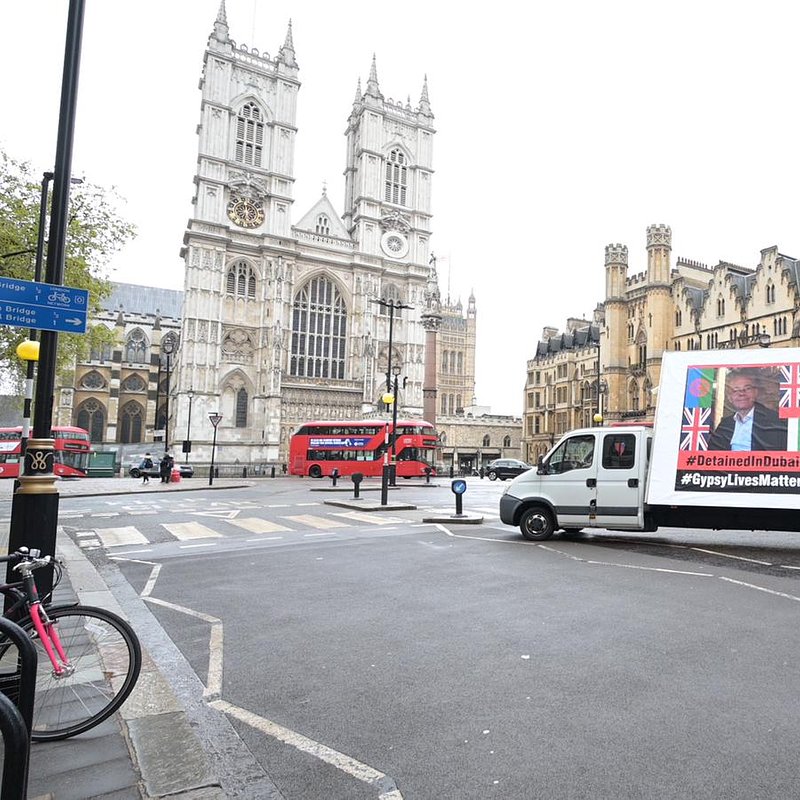 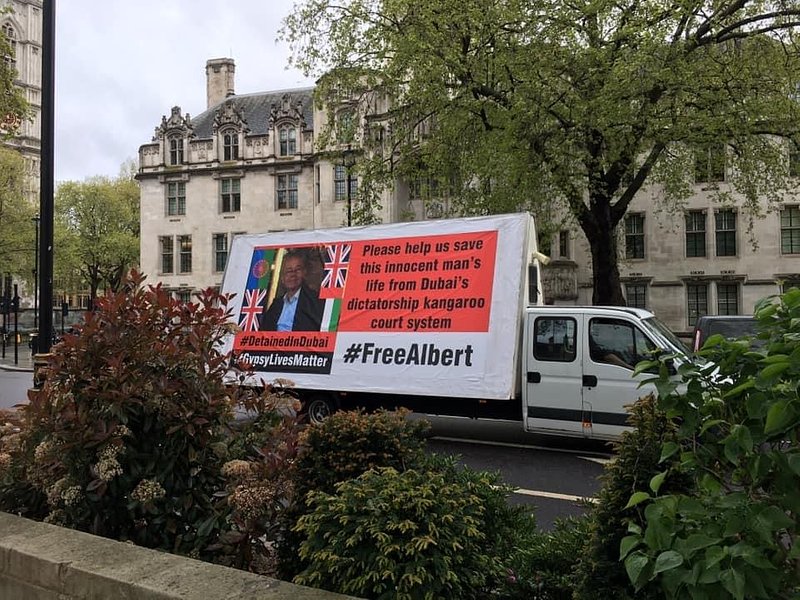 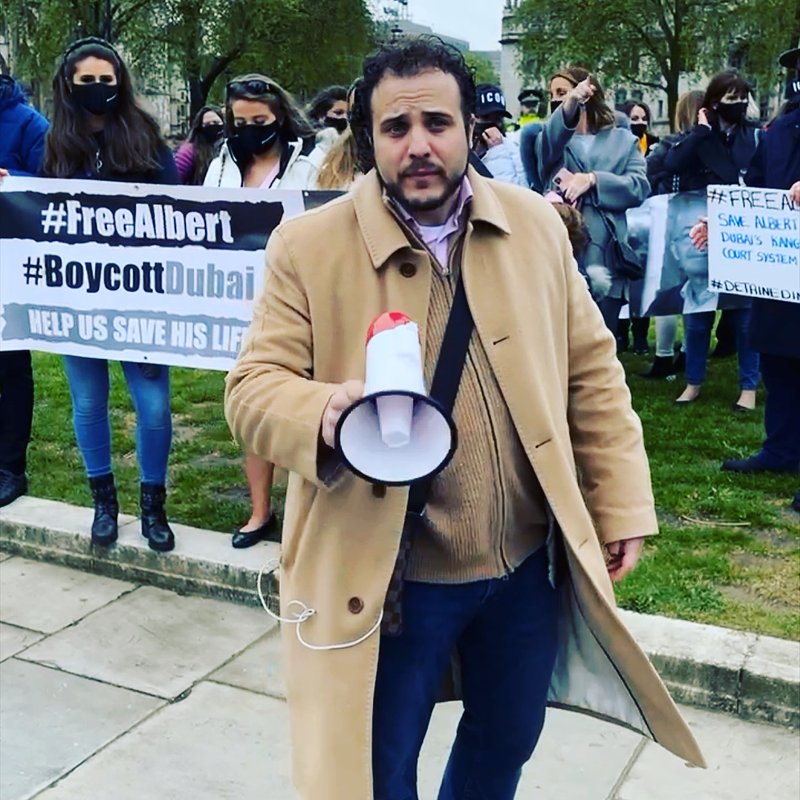 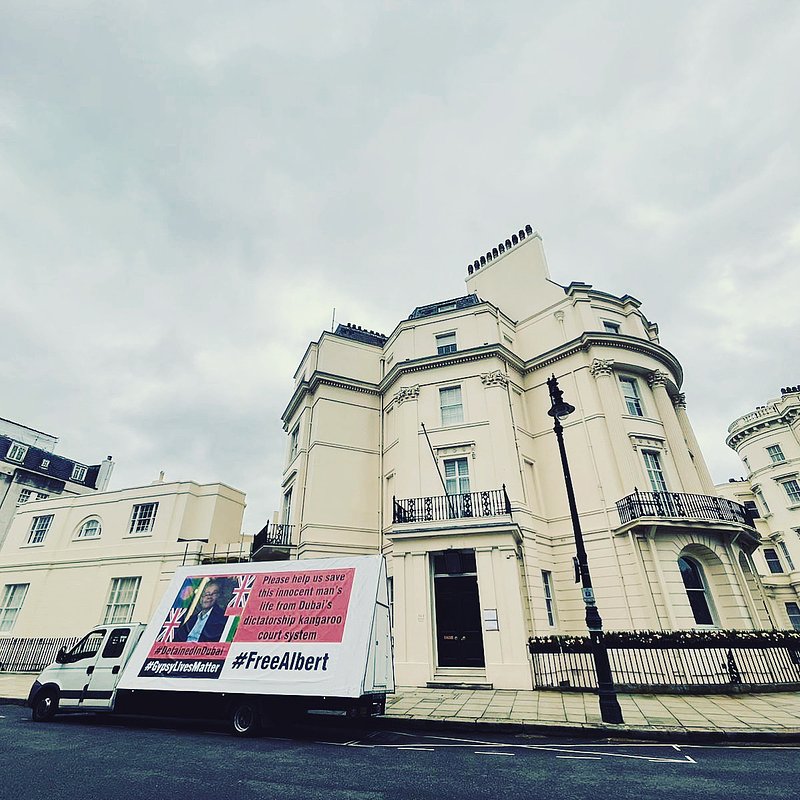 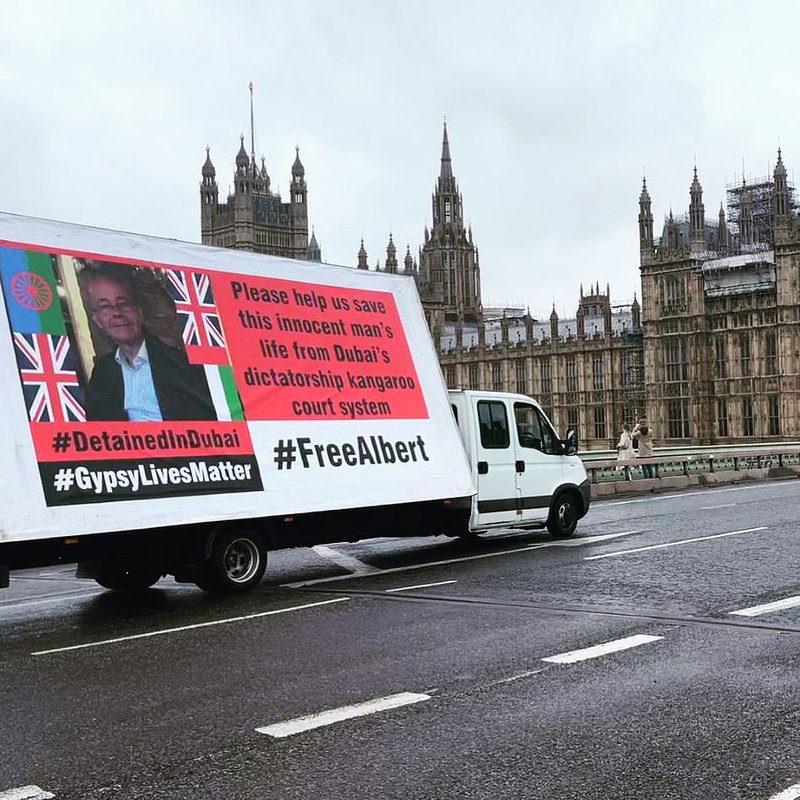 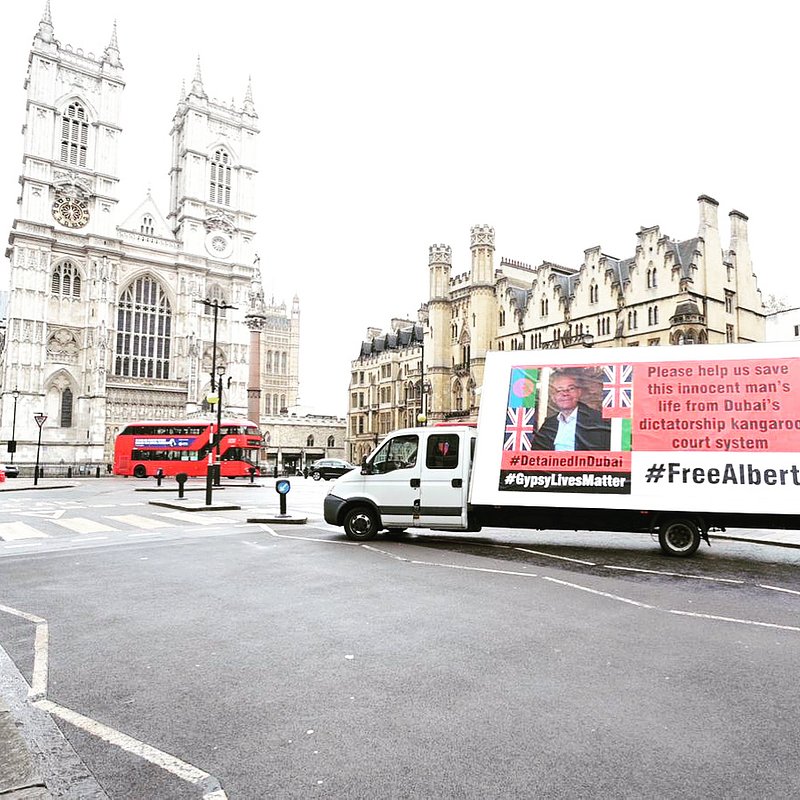 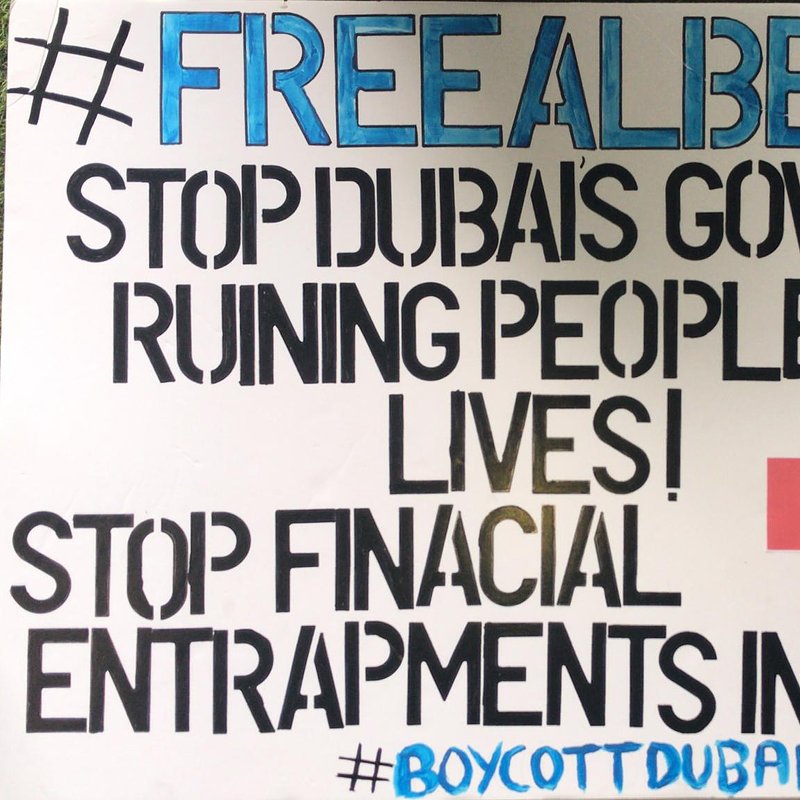 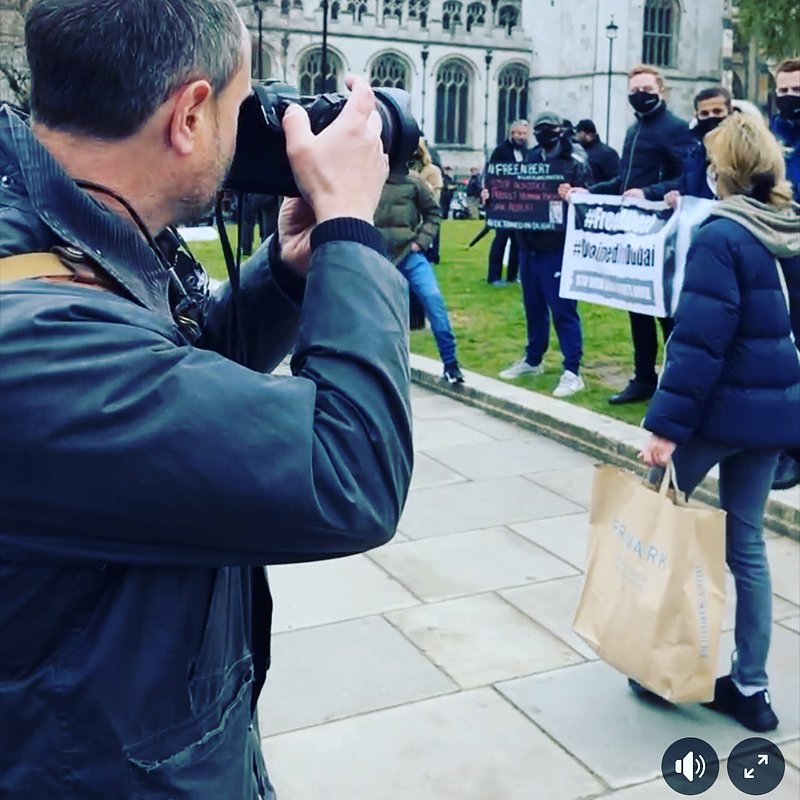 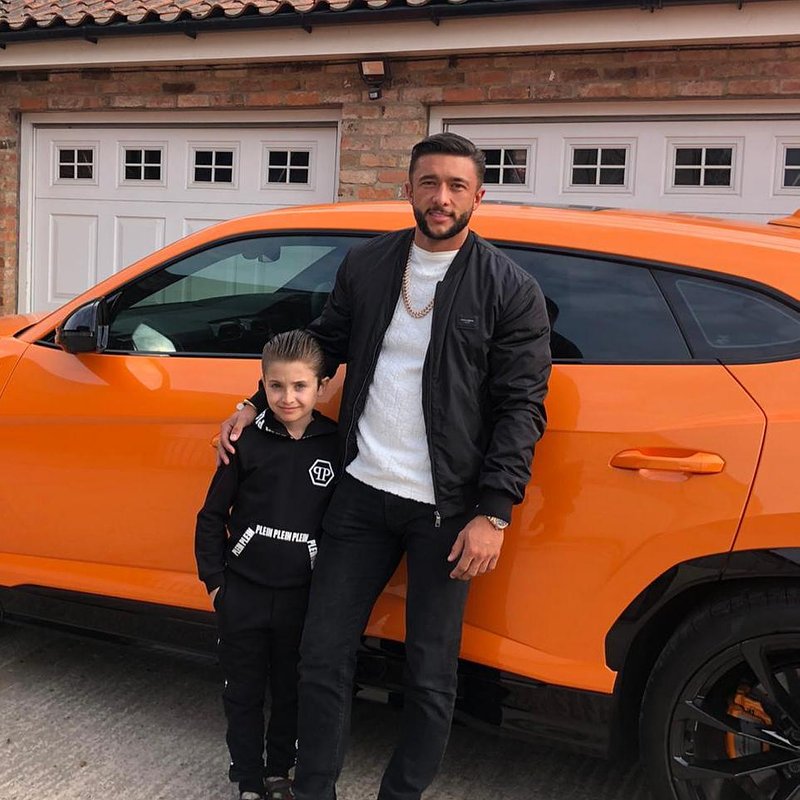 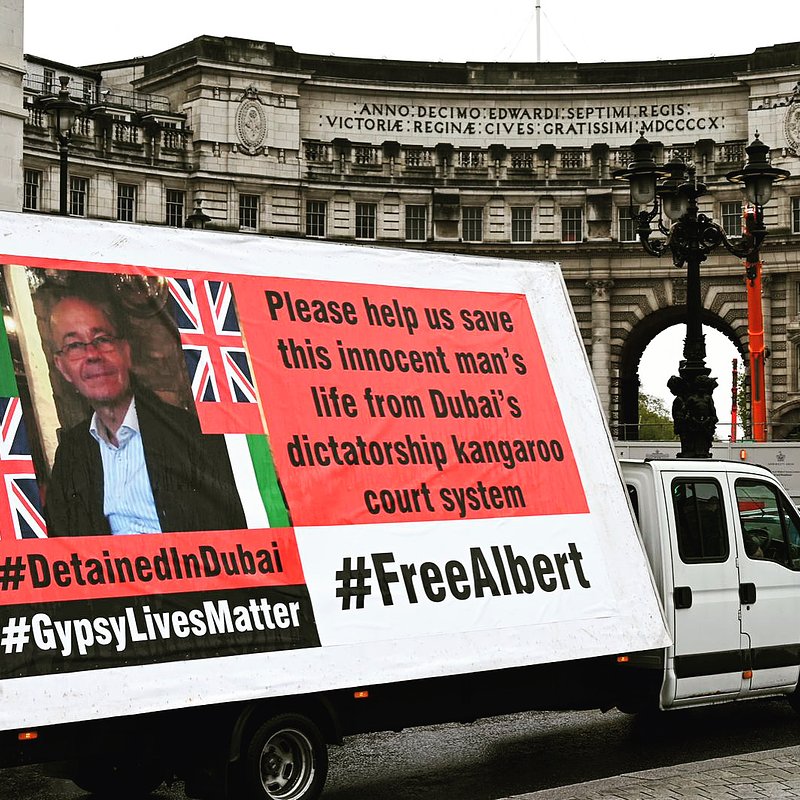 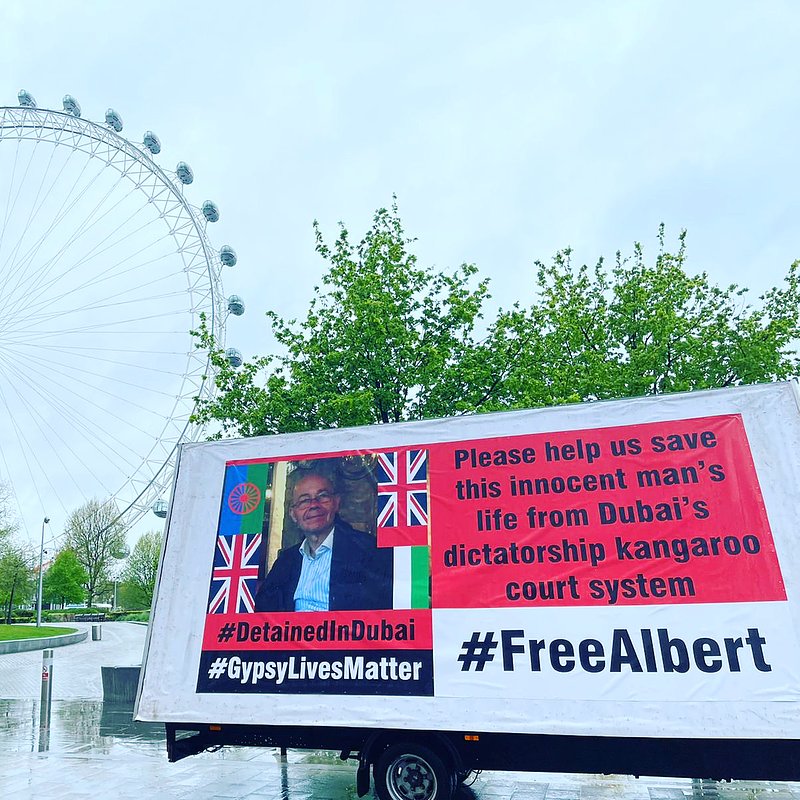 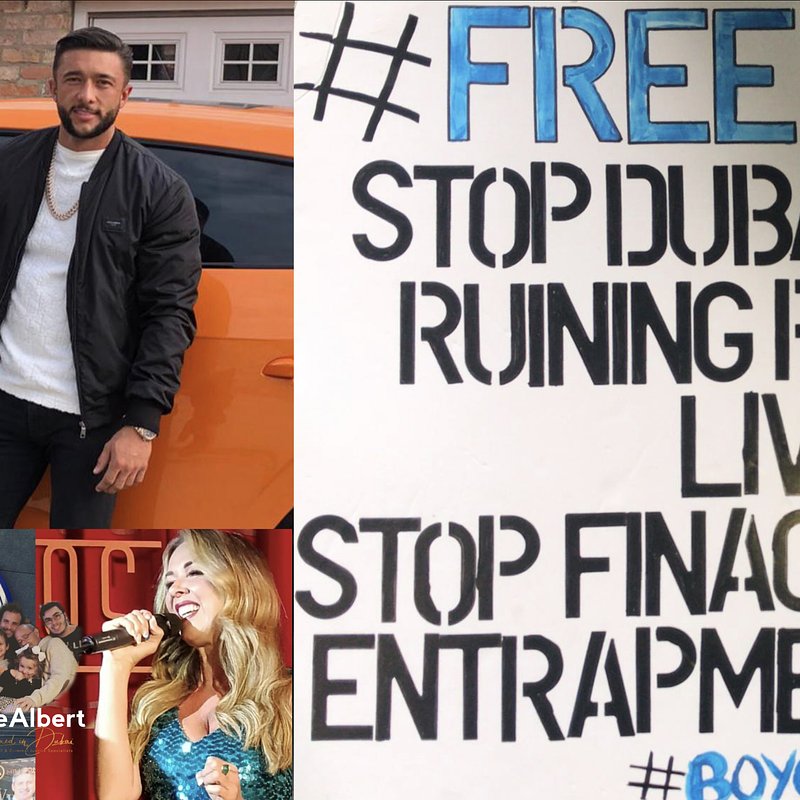 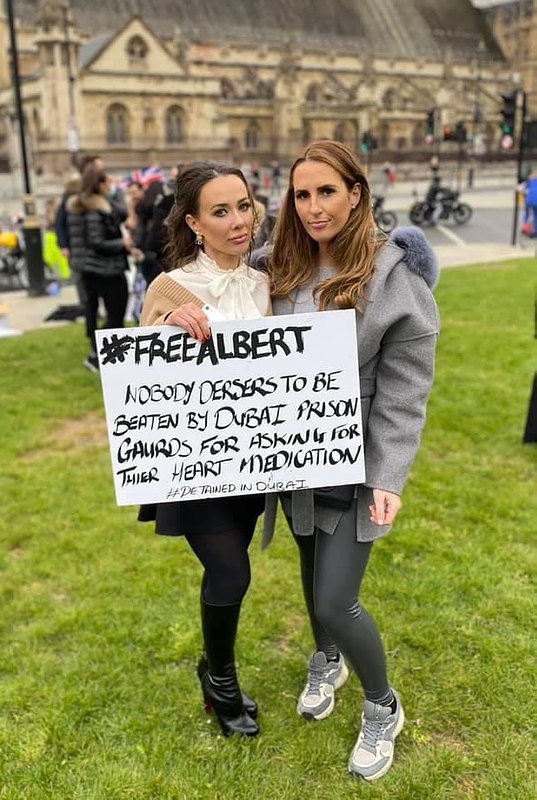 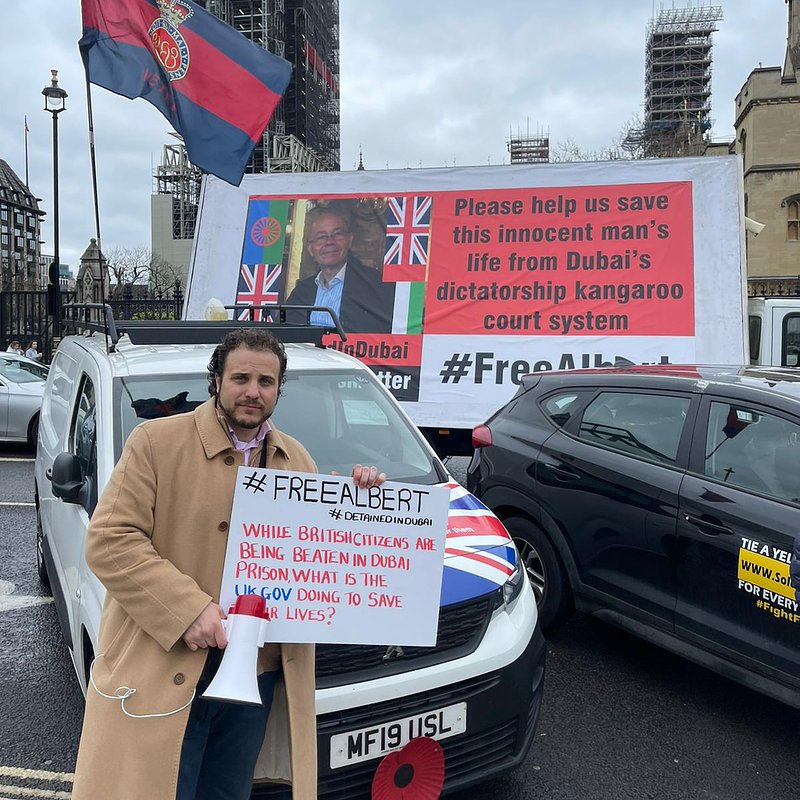 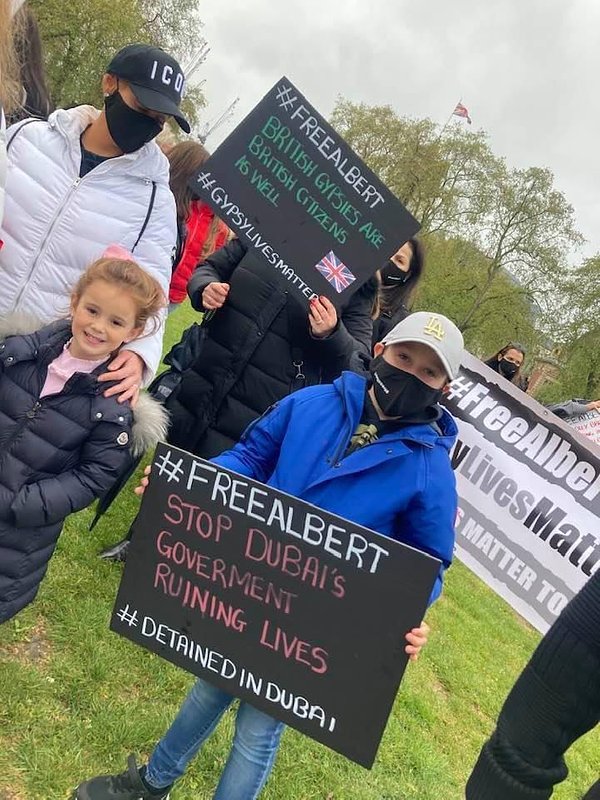 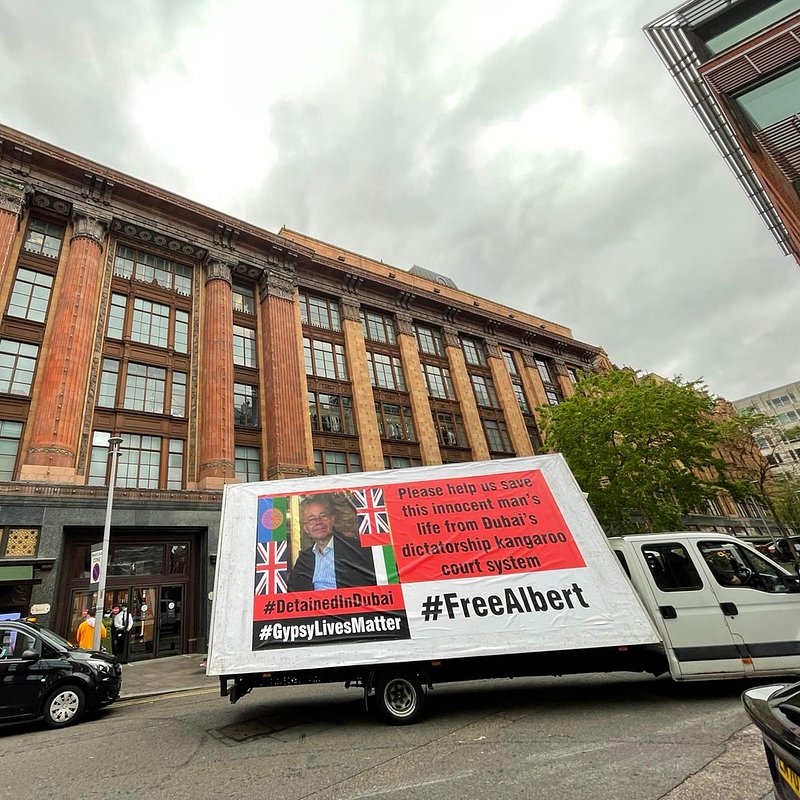 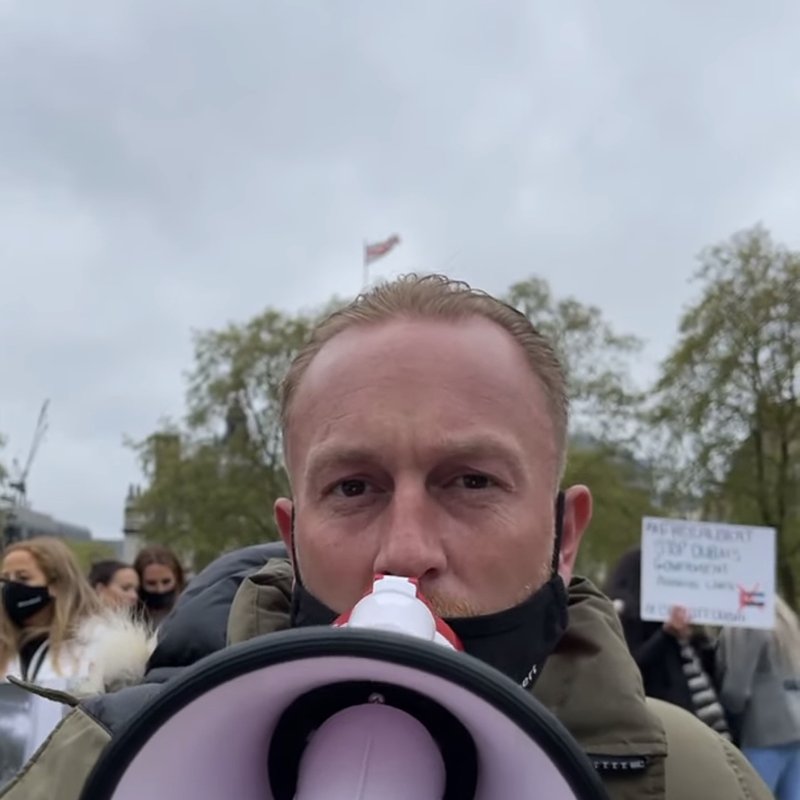 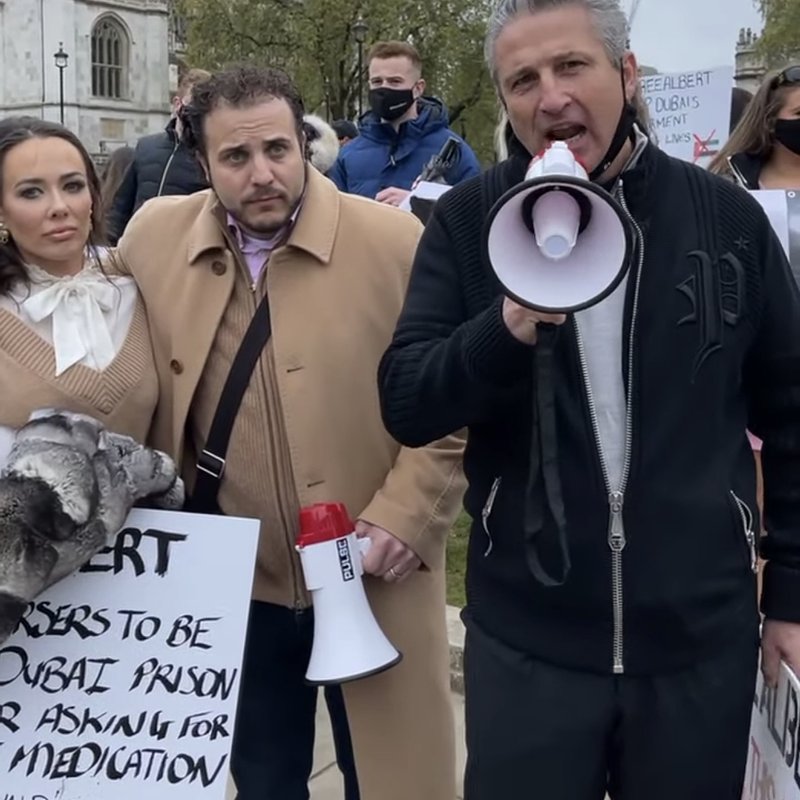 Torture in the Emirates

Lady Whitaker and Andy Slaughter, MP have voiced their serious concerns to the Foreign Office over the UAE’s treatment of British grandfather, Albert Douglas. In fact, they’ve even suggested sanctions may be needed to protect UK citizens abroad. “This is not the first ti...