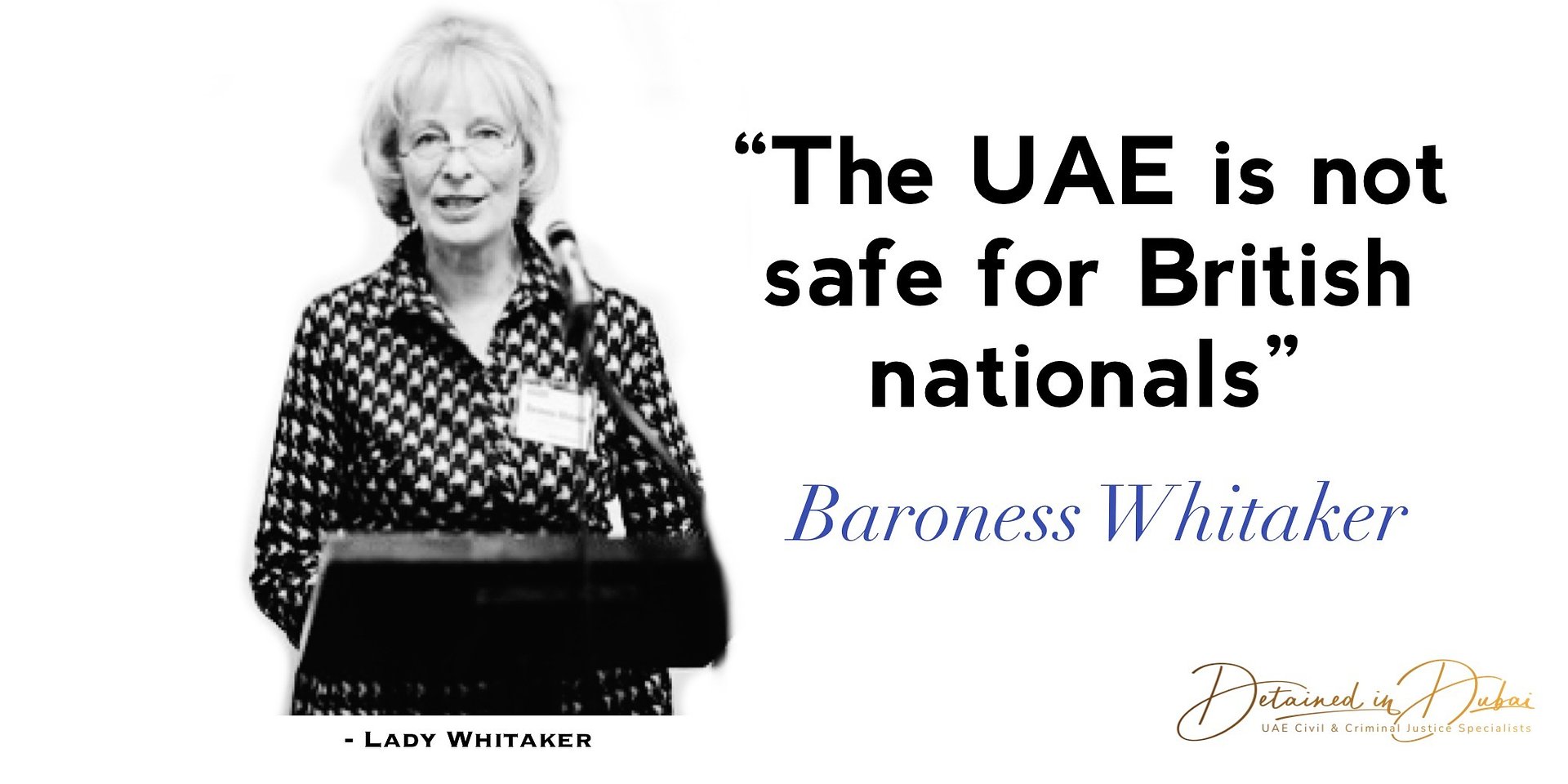 Lady Whitaker has called for increased travel warnings to the UAE as well as sanctions for human rights violations.

“The UAE is not safe for British nationals” - Baroness Whitaker
Promoting the UAE to British investors and tourists is putting UK citizens at risk, according to criminal justice specialist and CEO of Detained in Dubai Radha Stirling, who called this week upon Downing Street Chief of Staff Lord Udny-Lister to support enhanced FCO travel warnings against the Emirates, and to reassess the relationship between the two countries.
“Concerns over the increasing frequency and severity of abuse suffered by British citizens in the UAE have recently led Baroness Janet Whitaker and Andy Slaughter, MP to call on Rt Hon. Dominic Raab, MP to increase FCO travel warnings to the UAE, as well as open discussions on possible sanctions against the country, particularly in light of the ongoing case of Albert Douglas, who was arrested for crimes he did not commit and has been subjected to human rights violations and beatings in the UAE,” Stirling said in a formal letter to the high-powered special adviser to the Prime Minister and Member of the House of Lords.
Baroness Whitaker concurred in her own letter to Udny-Lister, “I have reviewed case after case, from Lee Bradley Brown, killed in Dubai police custody, to British war veteran Andy Neal, an entrepreneur falsely accused and jailed in the UAE for over a year, to several instances of UK citizens who fell victim to property scams perpetrated by the biggest development companies in the Emirates; the conclusion is clear: the UAE is not safe for British nationals.”
The Albert Douglas case has galvanised the British public and intensified scrutiny of the UAE’s treatment of British citizens, even stirring protests, marches, and petitions to condemn the Gulf state for its increasingly despotic behaviour.
“It is simply irresponsible of the British government to continue allowing the UAE to promote itself as a safe destination for investment and tourism,” Stirling explained, “Cases of wrongful detention, forced confession, fabricated evidence, torture and serious human rights violations are becoming both more frequent and more severe. If the idea has been that maintaining friendly relations with the UAE would gradually lead to improvements in the local justice system, it has been a spectacular failure. How many more innocent British citizens are going to be defrauded, arrested, beaten, subjected to torture and life-shattering trauma; how many more will have their life’s savings devoured by state-sanctioned scamsters; how many more British investors and business people will have their companies liquidated at the hands of ruthless Emirati partners, before the UK recognises that this is not a mutually beneficial relationship?”
Join us on Telegram for instant breaking news

News from Due Process International, Detained in Dubai, RAK, Middle East and more, with Radha Stirling

Stirling also drew attention to the potentially coercive influence of UAE investment in Britain, “We would strongly suggest the UK carefully examine the nature, extent, and ramifications of Emirati investment in Britain, which we believe is fundamentally intended by the UAE to influence UK policy towards the Emirates,” she cautioned in her letter to Lord Udny-Lister.
The UAE recently struck a deal with the British government that would see Abu Dhabi pump roughly £5 billion into the UK across multiple sectors including health, energy, and infrastructure. The agreement has been characterised by some as a post-Brexit bribe to boost Prime Minister Boris Johnson during Britain’s current economic difficulties, which have been further complicated by the Covid-19 pandemic.
“The UAE has never been held sufficiently accountable for the death in custody of Lee Bradley Brown 10 years ago, and we have only seen their impunity expand over the past decade,” Stirling said, “Economic interests mustn’t be allowed to take priority over the safety of our citizens, and the UAE has made it clear time and again that Britons can and will be preyed upon in the Emirates without the slightest fear that such abuse would have ramifications for the UK-UAE relationship. We are urging the government to seriously re-examine our relations with the UAE, increase the FCO warnings about the risks faced by Britons if they invest in, or travel to the Emirates, and to finally begin holding the UAE accountable for its breaches of human rights and disregard for the rule of law.”

New Inquiry into the death of Lee Bradley Brown, who died in custody just 6 days after his arrest

The UK High Court has ordered a new inquirty into the death of Lee Bradley Brown, who died while in police custody in Dubai. Lee's family and friends have insisted that he was murdered and have etablished a facebook support group called "Justice for Lee Brown, murdered by cops in Dubai". The original reports and accounts of what caused Lee's death were quite conflicted and no serious inquiries were conducted to conclusively resolve the cause. We hope that the fresh investigation will conclusive

UK veteran Andy Neal was arrested in Dubai in late 2018 on the basis of an informant. Despite there being no evidence of drugs in his bloodstream, or in his possession; and despite the informant recanting his identification of Andy, the distinguished soldier was held for over a year and subjected to continuous efforts to coerce a false confession. Andy was recently exonerated of the allegations, and has just returned home to the UK. Radha Stirling, CEO of Detained in Dubai, who represented Andy,

60 year old grandfather, Albert Douglas, was the subject of a parliamentary question raised by Lady Whitaker: Question: To ask Her Majesty's Government what representations they have made to the government of the United Arab Emirates regarding the imprisonment of Albert Douglas. (HL593). “Albert Douglas has felt completely abandoned by the British Foreign Office”, said Radha Stirling, CEO of Detained in Dubai and Due Process International. “He was beaten, forced to drink from a toilet tap, threa

60 year old grandfather, Albert Douglas, was the subject of a parliamentary question raised by Lady Whitaker:

In a most egregious attack, those who are responsible for the safety and protection of people in their custody, took advantage of their power and abused the 61 year old grandfather, Albert Douglas.

The FCO is broken

The first thing most foreign nationals do when they experience problems abroad is to contact their embassies.  It is fair to say that people expect their countries’ diplomats to swoop in and protect them with all the weight of their governments behind them, particularly ...