Britain urged to defend its sovereignty and protect Brit from extradition under foreign laws that would violate UN principles and international law.

A British crypto expert faces extradition from Saudi to the US but lawyers and academics claim this would be a violation of international law as it impinges on the sovereignty of Britain.
The US has increasingly sought to apply its own laws universally with increasing vigour. Just a short while ago, it was concerning when countries like Australia wanted to charge citizens with conduct in another country. The implications at the time were extremely concerning. Not only were people suddenly subject to the laws of the country they were visiting, but they were also subject to their own country’s laws. Although there was significant concern about the universal application of a country’s laws, the public was subdued with promises that it would just get “the real baddies, mostly child abusers”.
Fast forward a couple of decades and we are seeing the very “slippery slope” analysts foresaw in the early days. Once the precedent for extraterritorial laws was accepted and experimented with, it didn’t take long for those powers and laws to be expanded. The US has been the worst offender.
The Department of Justice (DOJ) decided to indict in absentia British national Christopher Emms alleging that he violated US sanctions against North Korea when he visited the country to attend a cryptocurrency conference that another US citizen attended. The 30 year old crypto expert, an advisor to British regulators and a frequent speaker, violated no British laws nor international laws when he attended the conference, but the DOJ listed Emms on Interpol’s Red Notice database during his visit to Saudi and has applied for his extradition under the IEEPA, a statute that specifies it only applies to “US persons”.

US seeks extradition of British national over cryptocurrency conference: The case of Christopher Emms.

The US has issued an Interpol Red Notice against Chris Emms for allegedly violating US sanctions against North Korea (DPRK). Emms is currently held in Saudi Arabia as he fights against the US extradition request. The US has cast a wide net over blockchain professiona...

“After consultation with lawyers in the UK, Saudi and the US”, extradition expert Radha Stirling who is assisting Emms explains, “we are disappointed the US would challenge the sovereignty of the United Kingdom in seeking the extradition of a British citizen who has not violated any British or international laws.
“If Saudi Arabia were to agree to the extradition request, they would also be in violation of international law and UN principles respecting sovereignty. The US has absolutely no right to apply their laws universally to foreign nationals and expect countries to surrender them. If Saudi and the UK do not stand up to this expansionist authoritarian mindset, they better start teaching US law at British schools”. 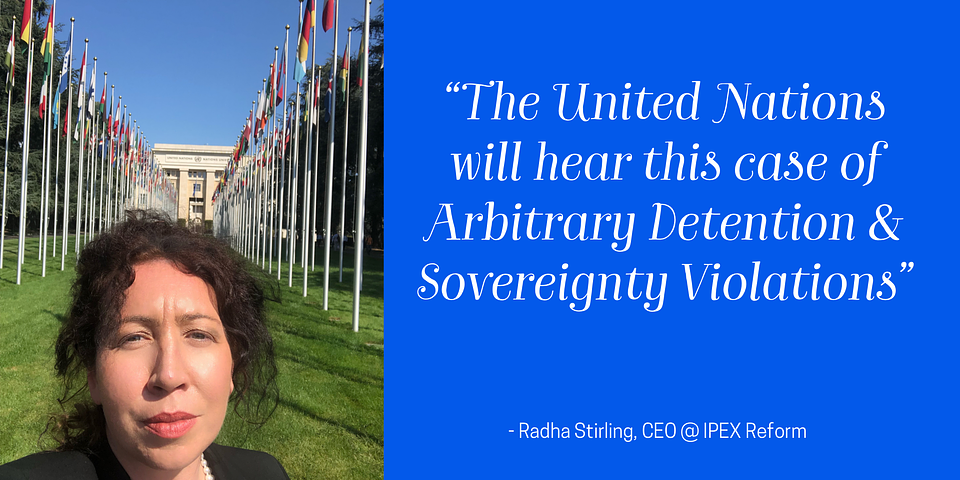 Due Process International will be appealing to the United Nations on behalf of Christopher Emms.

At the time of the conference, the US President and his advisors had visited North Korea and were seeking to strengthen their relationship and perhaps even forge a friendship. “It was a different time”, Mr Emms recalled “the British foreign office saw no issues with citizens attending the conference and I made sure to check the advice in advance”.
Stirling has called on the British government to request the dismissal of the indictment and extradition request, to preserve UK sovereignty, uphold international law and protect citizens against state harassment and legal abuse.

Chris speaking at the World Blockchain Forum in Dubai

After 8 months in Saudi Arabia, Christopher Emms has finally won his extradition battle.