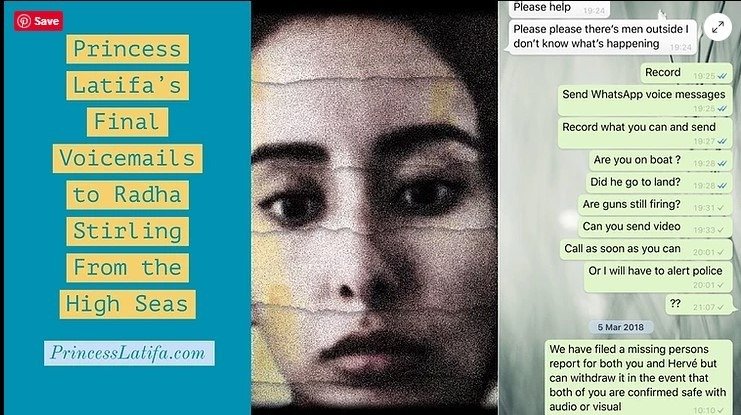 Sheikha Latifa Al Maktoum had planned her second escape for seven years, enlisting the assistance of former French secret service agent Hervé Jaubert. Before her escape, she recorded a video testimony to be published if she was captured or killed. Lesser known though, is that she sent Radha Stirling, CEO of Detained in Dubai, WhatsApp voice messages after her escape from onboard Nostromo on the high seas. Although circulated with journalists immediately, Latifa’s video testimony was the central focus.
Stirling was the only person the princess trusted to reach out to for support, authorising her to publicise her story in the international media, and asking for her help in arranging asylum or assisting in the event she was arrested and subject of extradition proceedings.
In the recording Latifa is lucid, and relates matter-of-factly what she and her sister Shamsa had suffered at the hands of their father, Sheikh Mohammed bin Rashid Al Maktoum, the Ruler of Dubai. “I had already been speaking to Latifa for a few days,” Stirling recalls, “When she entrusted me to act on her behalf and to take her story to the press, I asked her to record a brief summary about herself which I could present to selected journalists because I anticipated their reluctance to believe the story. At the time of the recording, Nostromo was on its approach to India, and Latifa was looking forward to moving on from there to the US where she would seek asylum.
“She was nervous but hopeful, and always articulate, intelligent and clearly feeling empowered by having finally put her plan into action. She was a young woman who knew what she was doing, knew what she wanted, and was pursuing it with tremendous courage. She was worried for the safety of everyone involved in her escape, and was doing her best to ensure success. Within 24 hours, I received Latifa’s panicked call from Nostromo as the boat was being raided by Indian and UAE forces.”
Latifa states on the recording that the date was March 3rd, one day before a joint military operation by UAE special forces and the Indian Coast Guard illegally attacked Nostromo in international waters and abducted all onboard.
In a WhatsApp message the day before the raid, Latifa said, “I don't think my father's men have found me yet but we're not out of the woods at all. Everyday it's survival and making life or death decisions at this point...They can (kill me). It would look worse for them if I just disappeared but they can kill me easily."
“I look at those last exchanges between me and Latifa and remember those haunting hours waiting to hear back from her, and it finally sinking in that she had been taken,” Stirling says. Latifa’s independent attempts to get her story published were predictably met with skepticism by journalists, “Even when I began contacting reporters, it was a struggle to get them to print the story. Remember, this was before Rahaf Mohammed, before Hind Al Balooki, and before Princess Haya; no one wanted to publish a story about the daughter of Dubai’s powerful Ruler running away for her life in March 2018.” Stirling explains, “But I knew Latifa’s life was on the line, as well as Herve’s and everyone else onboard Nostromo. Thankfully, Latifa had given me all the information I needed to confirm her identity and the facts of her story, and within days it ran in the international press.”
Several months after her capture, Latifa appeared in a staged photo op with former Irish President Mary Robinson and Princess Haya, looking listless and sedated. The official response of the UAE to Detained in Dubai’s UN petition for an inquiry into Latifa’s capture was a PR stunt attempting to display that she is in the loving embrace of her family, and that the whole episode is a private matter. Latifa’s audio message to Stirling, and her pre-escape video suggest otherwise. “Obviously, I am deeply concerned about Latifa’s welfare. What she alleged regarding the abuse of her sister and of herself at the hands of Sheikh Mohammed, abuse which prompted her to risk her life to escape, certainly suggests that Latifa is being held against her will, and potentially enduring serious violations of her human rights and her mental and physical wellbeing. This is decidedly not a private matter, it is a matter of law,” Stirling explains.
“Princess Haya herself has fled her marriage to Sheikh Mohammed, reportedly prompted by her concern for her children’s safety after learning the details of Latifa’s experience. An official delegation from the UN must be allowed to meet Latifa, and to talk with her unaccompanied by her father’s security staff or other officials, to genuinely determine her safety.” Stirling has testified before the UN Working Group on Enforced and Involuntary Disappearances, and submitted written testimony detailing all of her exchanges with Latifa, and the inquiry is ongoing. Aside from the scripted meeting with Mary Robinson last December, which was little more than an attempt to circumvent UN protocols following a damning and award winning BBC documentary on Latifa, the UAE has refused to fully comply with the inquiry.
“There has been no sign of Latifa for almost a year,” Stirling cautions, “At the very minimum, the international community must be given proof of life. Based on Latifa’s own statements, we have every reason to fear for her safety, and diversionary assurances from the Ruler’s Court are wholly insufficient.
“While Sheikh Mohammed is currently going through custody hearings over his children with Princess Haya in an English court, he would be well-advised to cooperate with the United Nations, and establish that Latifa is safe and well. As long as her fate remains in question, it is highly unlikely that any UK court would grant child custody to an alleged abusive father.”