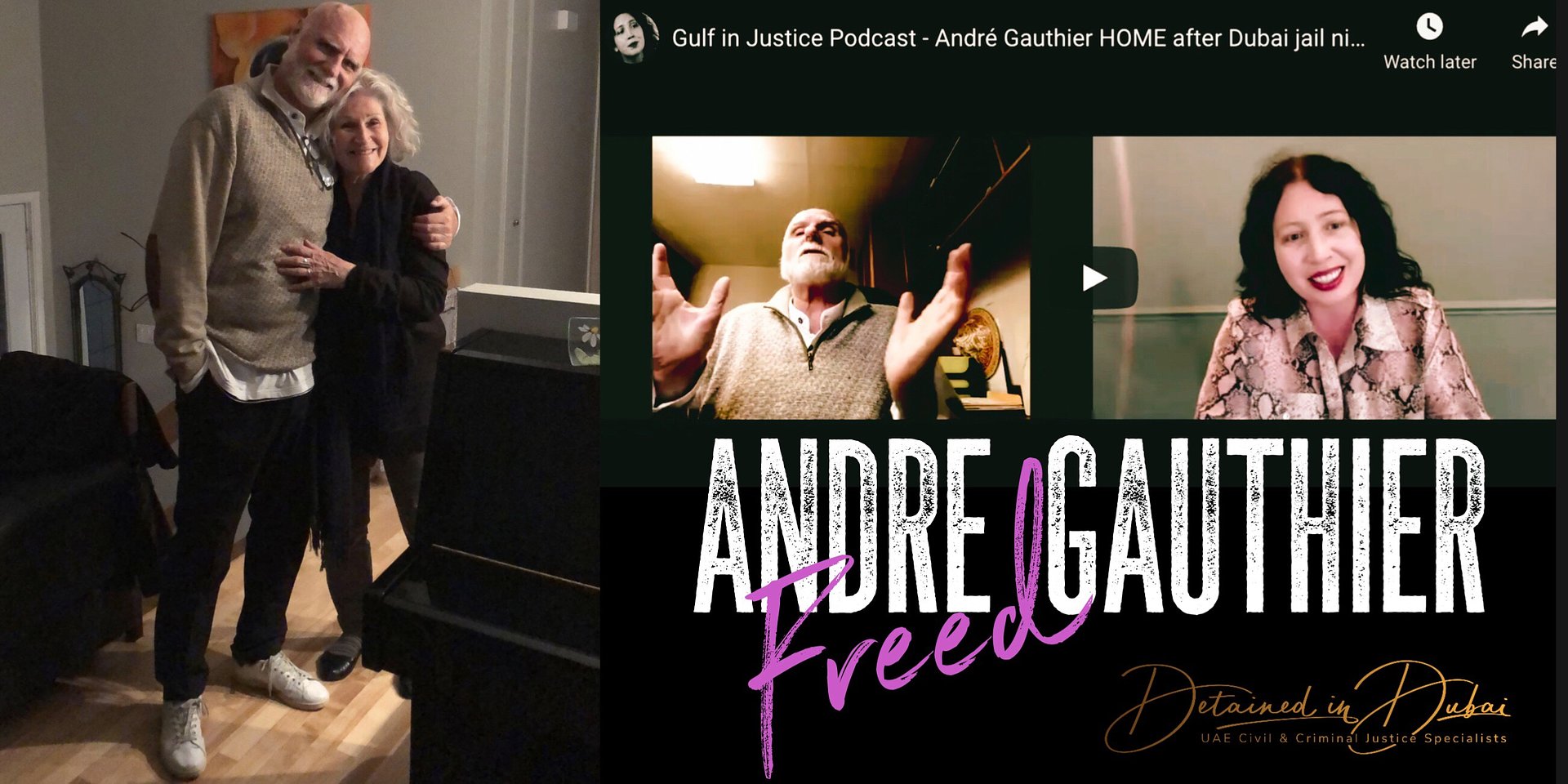 Press Release: André Gauthier returns to Canada after Dubai jail nightmare
André Gauthier is finally reunited with his family after years-long ordeal that left him scapegoated by members of Gold AE.
Gauthier arrived in Toronto on the 4th of May 2021 where he quarantined for three days before making the final trip home to Quebec. He made it home just in time for his wife’s birthday.
“It seemed as though Gauthier’s nightmare would never end when he first contacted us”, said Radha Stirling, CEO of Detained in Dubai who represents the Gauthiers.  Stirling interviewed André on her Gulf in Justice Podcast over the weekend.
“There were dozens of cases against him, some of which could not be appealed anymore. André had tried everything he could to resolve the cases legally, spending hundreds of thousand on lawyers, when he contacted us after a failed attempt to flee via the Omani border.
“It was certainly a complicated case. It involved Ponzi schemes, money laundering and royals. The investors in Gold AE who were defrauded, were wrongfully told to take cases against André. This would provide enough distraction for the scamsters to leave the country. They ended up setting up new and similar scams in Canada, which we reported to authorities.
“Once we reviewed the substantial evidence of André’s innocence, we released a video appeal from Andre himself to end his arbitrary detention and brought the case to the media. This injustice needed to be heard. The Canadian media was outraged by the legal abuse. With significant interest, Andre’s son, Alexis, recruited Richard Martel, MP who raised André’s case in Parliament on several occasions, and to the attention of Canadian Prime Minister, Justin Trudeau who commented on the case.  Martel is the Conservative deputy for Chicoutimi Fjord who worked relentlessly on André’s case, thanks to André’s brother for soliciting his help. Martel worked closely with the Canadian former foreign affairs minister, Francois Phillipe Champagne and his successor, Marc Garneau. A non-partisan effort was undertaken for the common goal to bring a Canadian citizen home, with former foreign minister Chrystia Freeland taking the initial steps. 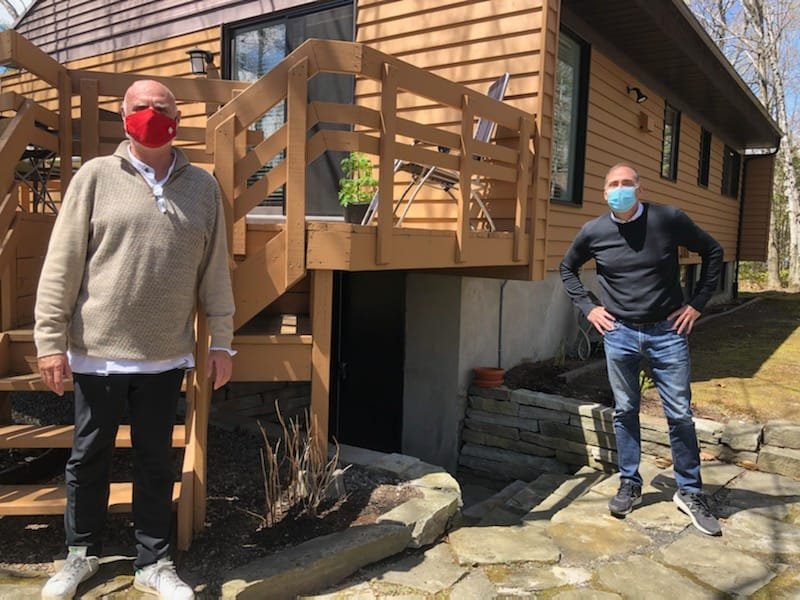 André Gauthier gets a personal welcome from Richard Martel, MP who was instrumental in the campaign to #FreeAndre

“Detained in Dubai works with foreign governments on a regular basis. We advised the Minister on how they could help André home, working tirelessly with them to support the process. It’s a whole different system in the UAE and most personnel have limited experience in the region. Our expertise is welcomed by diplomats.
“The fact of the matter is that André was instrumental in exposing the Gold AE scandal, and accepted the task of trying to recover the stolen funds for investors, but ended up being a scapegoat. It was absolutely outrageous, and we are grateful for the Canadian government’s responsiveness to our calls for intervention and for welcoming our input. While it was frustrating for everyone involved that the resolution took so long, the UAE finally acknowledged André’s innocence, and ultimately that is all that matters. We'd like to thank the Francois-Phillippe Champagne, Canada's former minster of foreign affairs and his counterpart in the UAE, HH Sheikh Abdullah Bin Zayed Al Nahyan.  We look forward to future cooperations that ultimately will make the Emirates a safer place for investors in the future. 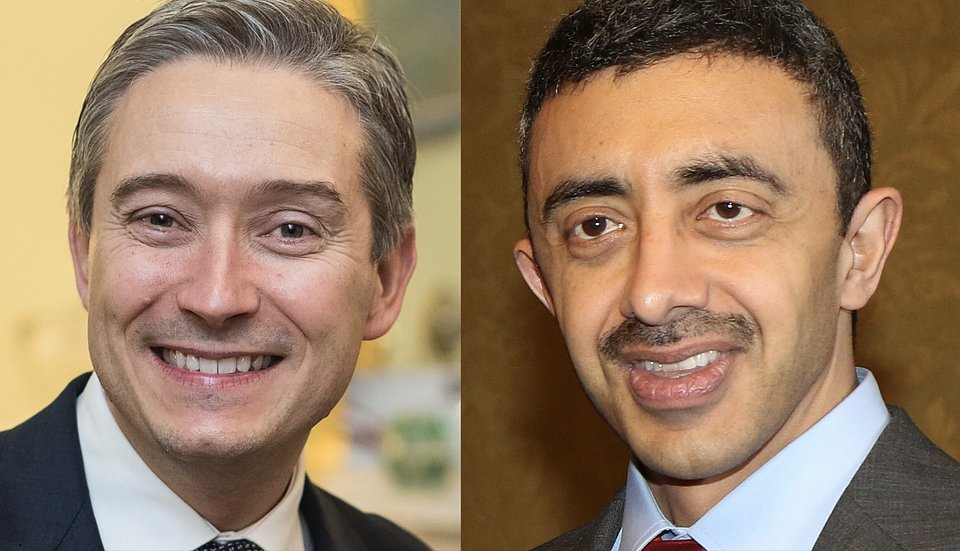 “Detained in Dubai and the Gauthier family would like to thank the members of the Canadian government whose support was instrumental in freeing André. Without diplomatic support, André would likely have died in prison. Canada has set an impressive example of how foreign governments can overcome significant adversity in the Middle East. Other countries should take note. With such a precedent setting diplomatic rescue, it will be difficult for another other foreign government to claim they ‘can’t get involved’.
“André and his family are extremely brave and very patient. His son Alexis, never gave up hope. He spent every single day lobbying politicians, diplomats, lawyers, and dealing with the media. The whole family deserves a holiday. André is in good spirits, isolating, and looking forward to a family reunion. I had the pleasure of speaking with him on the Gulf in Justice Podcast over the weekend, and look forward to meeting him in person.
“André Gauthier has made significant financial losses as a result of his wrongful detention and we will fully explore all avenues of retribution.”