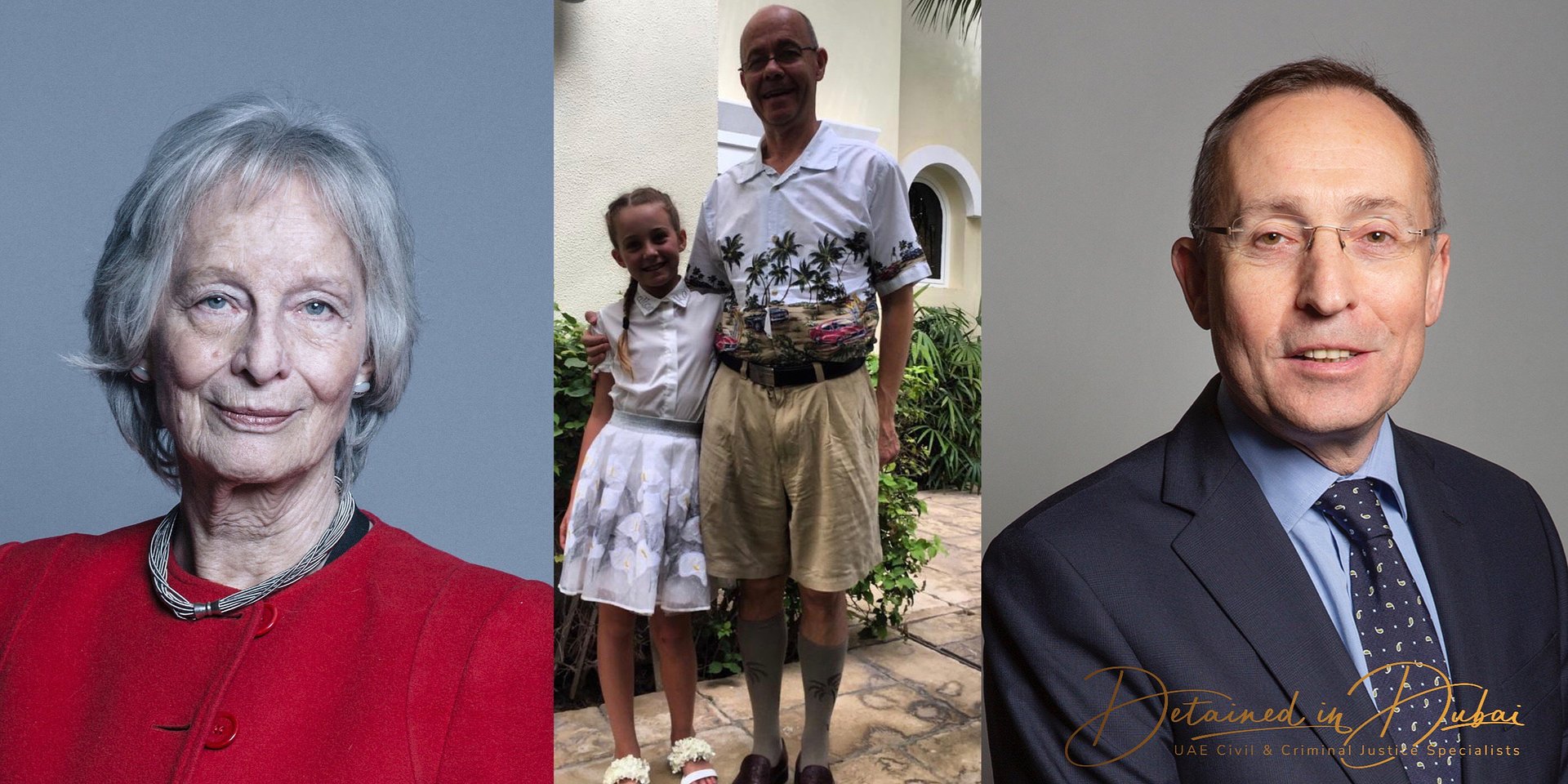 Baroness Janet Whitaker and Andy Slaughter, MP have called on Rt Hon. Dominic Raab, MP to increase FCO travel warnings to the UAE, as well as open discussions on possible sanctions after British National, Albert Douglas, was arrested and subjected to human rights violations in UAE prison.
Lady Whitaker and Mr Slaughter released a letter requesting the urgent diplomatic assistance of Secretary of State, Rt Hon Dominic Raab, MP.  They have asked him to speak with his counterpart in the UAE to bring Mr Douglas home.  Albert was detained for two months in Al Ain and has since been moved to Dubai. He has testified as to some grave human rights violations and torture committed against other inmates, and beatings against himself. He is 60 years old and was beaten for asking for his heart medication which he still does not have. He didn’t ask again. He was forced to drink toilet water and has been repeatedly encouraged, under duress and threat, to falsely confess. His life has been threatened on numerous occasions.

The letter states “Albert ran his own successful company in Dubai, but like many successful people, has become a target. There are now rumours that other cases have been opened against him and investigations are undergoing. This is to be expected. Cases that would usually be considered civil in the UK, are criminalised in Dubai. Therefore, if someone is imprisoned for one reason, it will usually cause them to default on personal and professional obligations and in turn, result in many more “criminal” complaints. Albert is also at great risk of extortive cases being opened against him, given that he is considered wealthy. When someone is jailed, the complainants will often rally up other people to open frivolous cases as a means to pressure and extort funds from the victim. This exact situation happened to Canadian André Gauthier who ended up with more than 70 cases against him. He was recently released and exonerated after the Canadian government’s intervention.

“For over a decade, the UAE has been highlighted for unfair trials, forced confessions, lengthy and unfair detentions, human rights violations, torture and even a death in custody. This is the reason that the United Kingdom refuses to extradite. This in itself, confirms the lack of due process in Dubai.”

The letter went on to highlight some of the most prolific issues throughout the UAE justice system that Detained in Dubai has brought to public light over the past decade, “If they are accused of a “crime”, a conviction is almost automatic, evidence is rarely considered and most will be forced to confess. Once arrested, they are often subjected to human rights violations and yet this is not something the British government warns of.

"This case of injustice is deeply concerning and the UK’s response must be swift and strong. If the UK allows for these injustices to continue, more and more British nationals will be abused. At the other end of the spectrum, the UAE needs to work to rebuild their reputation in the business and tourism sectors after so many cases have been brought to public attention. Many political figures have been outspoken in respect of Princess Latifa, an Emirati citizen, and the same tenacity must be applied to our own citizens.

"We urge you to act swiftly for Albert Douglas and join other foreign governments who have advocated for their citizens in Dubai. That includes the United States who recently secured the release of Danielle Jeffries and Peter Clark. Malaysia’s Foreign Minister personally travelled to Ras Al Khaimah, UAE to meet the ruler and secure the release of Richard Lau. Canada secured the release of André Gauthier and Australia helped Matt Joyce and Marcus Lee home. In other British matters, UK diplomatic intervention led to the release of Matthew Hedges, Asa Hutchinson, Conor Howard, Robert Urwin and more.

“For the protection of British nationals abroad, we call on you to ensure the United Kingdom insist Albert Douglas is deported home to the UK or that travel advisory warnings are revised and updated and that sanctions are discussed. Rt Hon. Jeremy Hunt, MP suggested recently that sanctions were not off the table and we urge you to support a movement that will protect Albert and British nationals in the future.We beg you to help this grandfather home. He is loved and respected in the community and should never have been subjected to such horrendous and egregious violations.”

Radha Stirling, CEO of Detained in Dubai, who is representing the Douglas family, added “It is outrageous that the United Kingdom’s travel warnings do not reflect the true state of affairs.  They neglect to include the findings of the English high court that there is a real risk of false allegations, unfair trials, human rights violations and torture.  People who read the travel advisory will believe that if they follow the law, they’ll be safe but this is far from true.  False allegations are obscenely common and convictions are secured on the basis of a single witness statement in a hearing that lasts just a few minutes.  Forced confessions, human rights violations, beatings and torture in custody are commonplace and thus, a single false allegation could have severe repercussions.
“Torture is so unfortunately common, that we are producing an in depth report on the issue.  It is not acceptable that since the death of Lee Bradley Brown in police custody, the UK government has not issued more severe warnings or demanded better treatment of citizens.  Albert Douglas, who remains in prison, joins Matthew Hedges, Lee Bradley Brown, Artur Ligeska, Karam Al Sadeq and Princess Latifa in his complaints of brutality.
“The UK must act swiftly to bring Albert Douglas home and take affirmative steps to ensure the safety of British nationals abroad.  This must include increased travel warnings.  The UAE should not be able to market themselves as a modern expat and tourist destination in our media, without ramifications for the abuse of citizens they have deceived into visiting”.
“We are thankful to Lady Whitaker and Andy Slaughter, MP for their efforts to protect British citizens and bring Albert home.  If we do not confront these ongoing issues, we will see further abuses and the loss of life.”

Miami woman detained in Dubai for starting her own accountancy business “suffered racism”. Miami accountant Danielle Jeffries, 58, is the latest American to face the Dubai justice system where she’s been sentenced to jail, a hefty fine and deportation for crimes she didn’t commit. Detained in Dubai’s founder, Radha Stirling responded to the conviction, “Despite clear evidence of Ms Jeffries’ innocence, Dubai police allowed the PRO to change his witness testimony and subsequently prosecuted both parties on behalf of their Australian accuser. Danielle has been caught up in the shambles of a legal system, thrown from pillar to post while trying to defend herself from these charges. She has tried everything to have her voice heard by authorities, even having contacted as a last resort, the Minister of Happiness, who couldn’t understand how this had happened, expressed empathy but did nothing to help. “She spent 30 days without electricity and water, utilities she couldn’t connect in her flat while her passport was with police. She’s been battling depression, physical and psychological distress and is beside herself with worry over her 93 year old mother back in the States who she can’t visit as she used to. “The fact is, she can not pay the $40,000 fine so even if she’s arrested today and thrown in prison for three months, she still won’t be able to go home to the States. She’ll be stuck in the country indefinitely. It’s absolutely abominable that Dubai would treat investors like this. How will the city attract entrepreneurs when they can be prosecuted and jailed without evidence, then detained in the city indefinitely, with no permission to work to raise the money for their unfair fines? “Danielle Jeffries is a black woman in a Middle Eastern legal system and this in itself, will influence her access to a fair trial. The accuser, in criminal cases in Dubai, is almost always favoured and believed. Evidence is not required and a mere accusation is sufficient to achieve a conviction. Add to that the fact that she is a woman, and then that she is a black woman, and she is further disadvantaged in the judicial system. Racism and sexism are prevalent throughout the United Arab Emirates, to the point where a female rape victim will be charged with sex outside marriage, or where an Asian or African may be sentenced to death while a white Brit charged with murder, will be released in just a few years. “Congresswoman Frederica Wilson, who is supporting Danielle, approached the UAE’s Ambassador to the US, His Excellency Mr Yousef Al Otaiba, but his advice was simply to pay the fine. “We are writing to the US State Department to recommend they review and increase warnings to American citizens, and business and investment groups also need to be advised. The UAE has got away lightly with actions against US citizens. We have seen the UAE government attack a US registered yacht in international waters under false pretences, with no apparent consequence, and now we are seeing the systematic abuse of American tourists, expats and entrepreneurs in the UAE. David Oliver, was detained in Dubai over a bank debt and only through diplomatic intervention, was he returned home. Melissa McBurnie was arrested recently after being sexually harassed by an Egyptian man, only released following international outrage, and now we have Danielle, who is facing jail over a document she had nothing to do with. Gulf in Justice Podcast