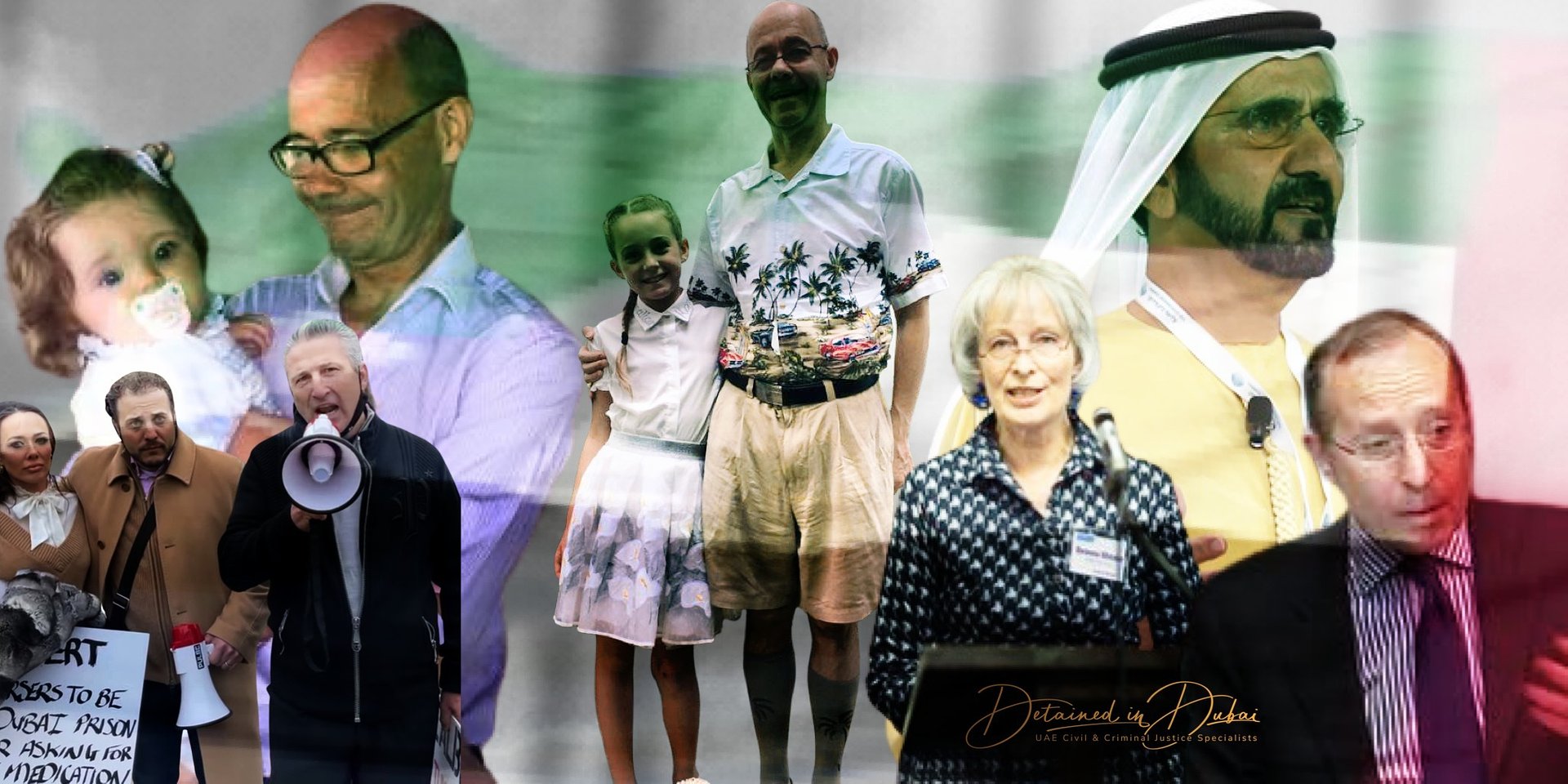 Brit detained in Dubai undergoes surgery from prison beating
A British national has been admitted to hospital to repair a dislocated shoulder that he has endured for five months following physical beatings from prison guards. A doctor finally saw the grandfather and was shocked that he had not been treated, having suffered in pain until now.
Londoner Albert Douglas, had no idea that he could possibly be jailed in Dubai over bounced cheques he didn’t write. He had a successful business and had been a long term expat. He loved Dubai and had complete faith in the country until the unthinkable happened. He was accused of being involved in his son’s business which had irrecoverably declined due to factors beyond his control. He knew he was innocent and had substantial evidence to prove it. He had faith in the legal system finding him innocent on this basis and so decided to remain in the country and resolve the situation.
As Detained in Dubai, a 13.5 year old advocacy group well knows, innocence is often irrelevant in the UAE, where court hearings last a few minutes and where “wasta” (influence) plagues the justice system. Lawyers are there for themselves and to increase their own “wasta”, still charging hundreds of thousands to unsuspecting clients.
Mr Douglas, a successful businessman of 60 years old, was jailed for a cheque he did not write. “If only they would forensically analyse the cheque, they would see it is not my signature and it does not have my fingerprints on it”, he told the British Embassy. Seven months after his arrest, they finally confirmed that the cheque was not his, but he is still in prison. Since his arrest and based on the same reasons, a number of additional charges were levied against him but again, the allegations are nothing to do with Albert and are not due to any actions of his own. “Albert has been in prison for most of the year and as a result, his own business has collapsed, causing new financial cases to be opened against him. This is how dangerous Dubai can be to investors”, said Detained in Dubai CEO, Radha Stirling, who has defended a number of clients who have been scapegoated. André Gauthier, a Canadian national, had more than 70 cases against him and faced life in prison until he was finally exonerated following diplomatic efforts. “André’s case exemplifies how important it is for foreign governments to assist UAE diplomats to properly investigate cases of injustice”, added Stirling.

Albert Douglas was beaten by prison guards, denied his heart medication and was forced to suffer inhumane conditions, including drinking from a toilet. He has been interrogated, threatened and suffered attempts to force him to confess to a crime he has not committed. Albert has maintained that he is innocent throughout, refusing to submit to pressure while putting his life at risk. Lee Bradley Brown was killed in police custody a decade ago with witnesses telephoning Ms Stirling to report the shocking incident of police brutality. The Inquiry into Mr Brown’s death has been re-opened in the UK after the UAE authorities refused to cooperate with initial inquiries.
Albert has been suffering in pain in prison for several months, unattended by medics. Now he fears being treated badly in hospital and has been told that if he accepts pain killers, he will be transferred to a different facility for inmates with psychological problems. He is too afraid to accept pain medication.
German national Dieter Kellouche, who has been held on false allegations by a Sheikh in Sharjah, transferred to hospital after being violently ripped from his top bunk bed, having refused to share his instant noodles with an inmate. It was several days before he was attended to, despite excruciating pain from his broken foot. He has been told the devastating news that he will never run again.
“These are not people who have committed crimes”, says Stirling. “They are victims of a justice system in desperate need of reform. When someone is wrongfully accused of a crime and jailed without evidence, their whole life is put on the line. It is horrendous to see Albert Douglas suffering this kind of treatment and seeing the British government failing to step in like Canada did for their citizen”.

Dieter Kellouche waited days for surgery, was deprived of painkillers after being attacked in his bunk bed.

The family has stepped in to found the #FreeAlbert campaign, warning companies that supporting Dubai, means condoning human rights violations against British citizens. “The UAE is not safe for foreign investors. The more successful you are, the more at risk of being targeted you are. Innocence or guilt is irrelevant”, added Stirling whose organisation has assisted in more than 15,000 cases of injustice in the UAE.
A number of MP’s and even Baroness Whitaker, have called for increased FCDO travel warnings and sanctions against the UAE. The family will continue to lobby for Albert’s freedom until he is safely returned to England.

“British companies and investors need to re-think their involvement in a country who values lives so little, where people can be beaten, tortured or even killed because some greedy individual opens a frivolous case against them”, Albert’s son Wolfgang warned.
MP’s and celebrities like Undercover Boss star, Alfie Best, are supporting the campaign to Free Albert.

Detained in Dubai reflects on 14 years of service