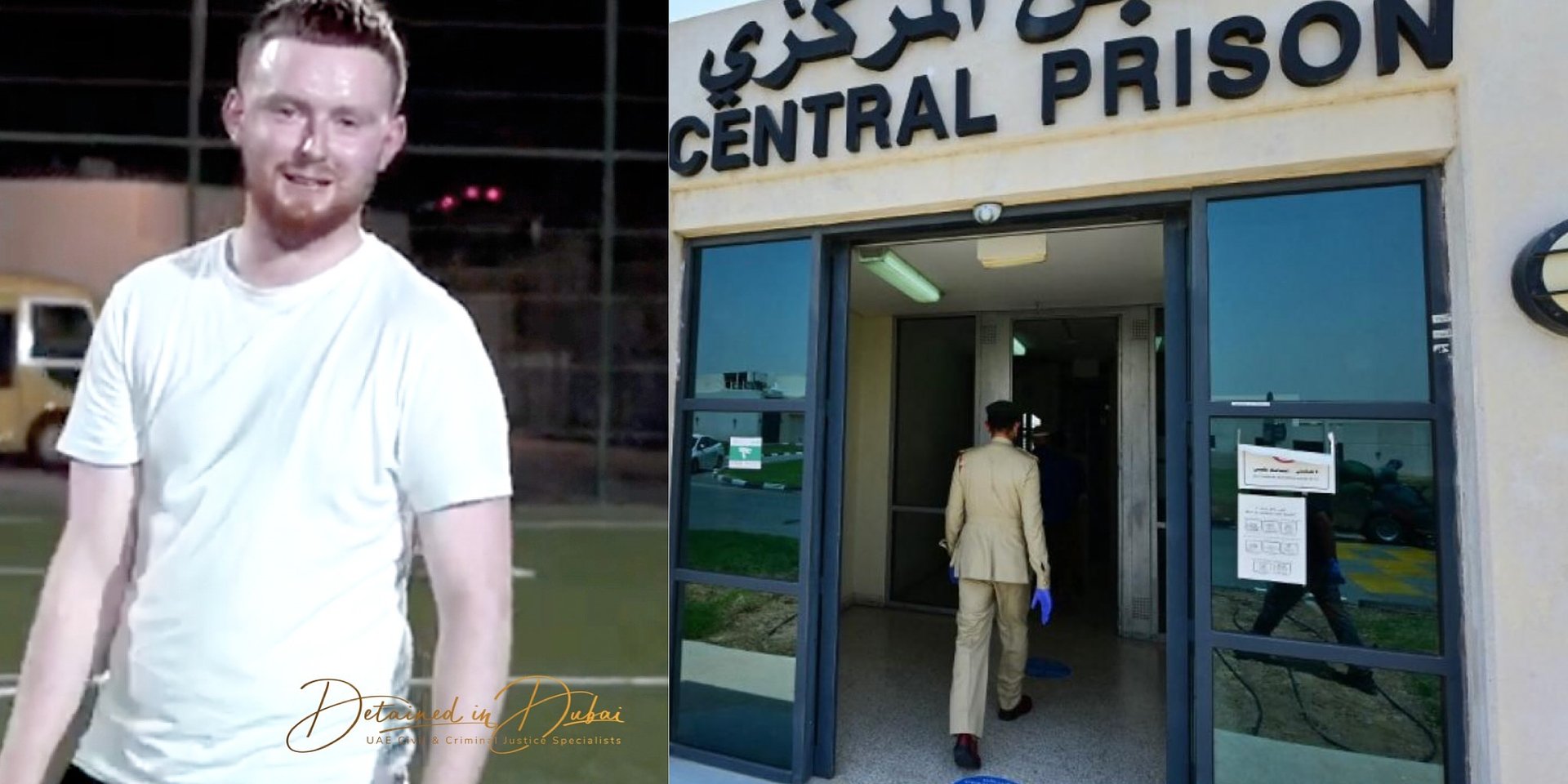 Billy Hood in cockroach infested Abu Dhabi hell hole.
The 24 year old footballer was sentenced to 25 years in Dubai prison over CBD vape oil left in his car by a visiting friend, is suffering rough conditions in Abu Dhabi as he awaits the verdict of his appeal.
After Billy’s lawyers lodged an appeal against his life sentence, he was transferred from Dubai to Abu Dhabi’s prison as the charges of trafficking and selling drugs turned the alleged offence federal. His family have been “worried sick” after his contact with the outside world was brutally cut off.
“I spoke to him but he was very limited in what he could say”, says Billy’s uncle David. “He was put into solitary confinement on arrival and the limit is supposed to be five days but he was put in for ten. The lights were on full beam 24 hours a day. Billy told me he came close to losing his mind in the cockroach infested cell with no toiletries and the aircon set to -10 degrees”.
Radha Stirling, CEO of Detained in Dubai and Due Process International added “this is a form of torture and most certainly contravenes UN directives. We’ve received numerous reports over the years that interrogation rooms and cells have been turned into freezer boxes, with some prisoners even douched in ice cold water. This treatment is a violation of what Britain stands for and must be investigated. We can not very well have our allies treating our citizens in this manner, while we continue to allow them to market their country as a safe and modern destination for tourism and investment”.
“While the Foreign Minister has told us that the UK has the ability to influence the UAE in the area of human rights, they have clearly failed to do so and we can link the abuses of British citizens to the lack of accountability Dubai faced when Lee Bradley Brown was killed in custody. An Inquest into his death is scheduled for January and we hope the UAE faces consequences for their ongoing violence against prisoners. Albert Douglas has just been hospitalised and faces further surgeries after being beaten by prison guards. How can the UK let this continue?”
David tells us “conditions have gone downhill rapidly. Billy is very fearful of this new regime, and was very very cautious in what he was saying. The embassy is a total embarrassment, they visited him on Friday, a total waste of time. It’s the first time they have seen him in 10 months. There were guards present at the meeting and also a colonel of the prison. He tried to hand the embassy a letter for his mum, the colonel took it off of the embassy staff and said he will deal with it”.
“The Foreign Office was pushing for the safety of the Chinese tennis player who went missing and that’s very noble but when it comes to their own citizens, they simply don’t want to know, especially if they are in the UAE. It’s trade before people”.
Billy will spend his 25th birthday behind bars at notorious Al Sadr prison, in appalling conditions as he awaits the verdict of his appeal. Torture victim Artur Ligeska was held at Al Sadr describing it as “a harsh maximum security facility where The UAE consigns only the worst, most dangerous criminals and the conditions are almost medievally cruel”. Emirati lawyer Ahmed Mansoor is held at the same facility in solitary confinement where rights defenders have revealed the appalling conditions. British veteran Andy Neal was held in Al Sadr on drugs charges until finally being exonerated. 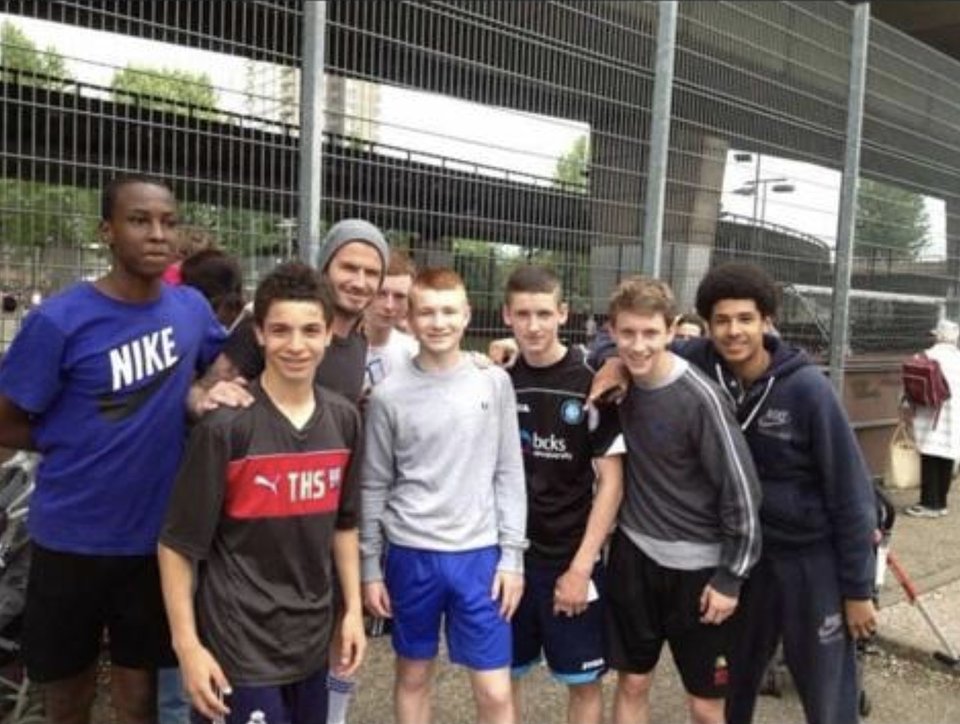 The FCDO along with Billy’s lawyers have submitted an application for clemency and his safe return to London, while his family have directly appealed to the ruler to intervene in what has clearly been a miscarriage of justice.
After their welfare check, the embassy reported they met with Billy and the prison Colonel. Billy was dressed in his prison whites and flip-flops. He explained that he feels let down by the Embassy’s input. He gave the Embassy’s absence at his five court hearings as an example. Billy had not been given hygiene products in solitary confinement and had been borrowing clothes to try to stay warm in the air conditioned ice box. The embassy asked whether he can buy clothes within the prison. “It’s very expensive”, he told them. They confirmed they would “try” to see whether clothes can be dropped off for him but the Colonel said no. Billy conveyed that he believed he had an ear infection and was told to request to see the doctor. “The deprivation of medication and medical assistance is commonplace throughout UAE prisons”, explained Ms Stirling, “Albert Douglas waited nine months to get his heart medication and to undergo surgery for his broken bones”. Billy has received a lot of “ant bites”, he told the embassy.
When prompted by embassy staff, the Colonel explained “a decision was recently made to facilitate transfers from other Emirates to Al Sadr despite ongoing maintenance work.” He acknowledged that the conditions of the prison are not to the standard they would like them to be.
Billy pleaded to embassy staff, “let Breda know that I love her and miss her too” and that “the conditions are terrible.” As the appeal date approaches, Breda is beside herself with worry. “I’m desperate for my son to return. Nobody can imagine the kind of distress and toll his arrest has taken on this family. We can’t think of anything else. We can’t sleep. It’s just non stop pain and I feel helpless, we’re all in tears. I just want my boy home”.
After Billy’s best friend Alfie organised a large protest in front of Parliament, a petition to free Billy Hood attracted more than 140,000 signatures, making it one of the leading petitions in Change.org’s history.
Detained in Dubai has raised Billy’s case with Parliamentarians, calling for support to increase travel warnings to the UAE. A three hour debate has been scheduled to help protect British citizens abroad.
Join our Telegram channel for breaking news broadcasts.
Follow our YouTube Channel for breaking news, podcasts and updates.
Join our Facebook page for social media updates.

24-year-old pro footballer sentenced to 25 years in Dubai.Our friend Billy is a 24-year-old semi-pro footballer and coach from Kensington has been sentenced to a whopping 25 years after Dubai police discovered 4 small bottles of CBD oil left in his car by a friend he’d driven to the airport two weeks earlier. Billy Hood was forced to confess in Arabic after being pressured by Criminal Investigatio 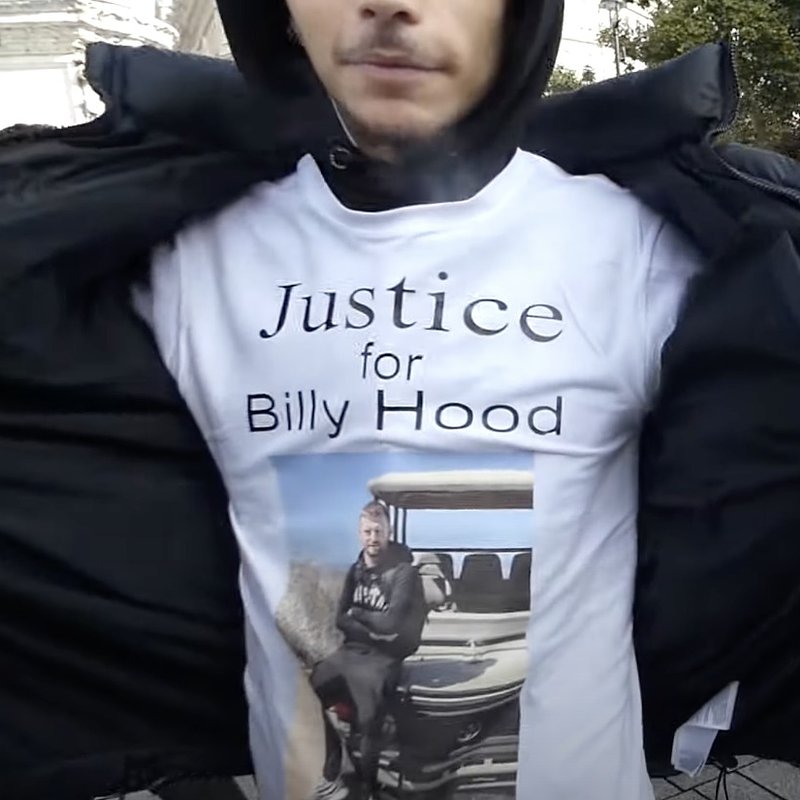 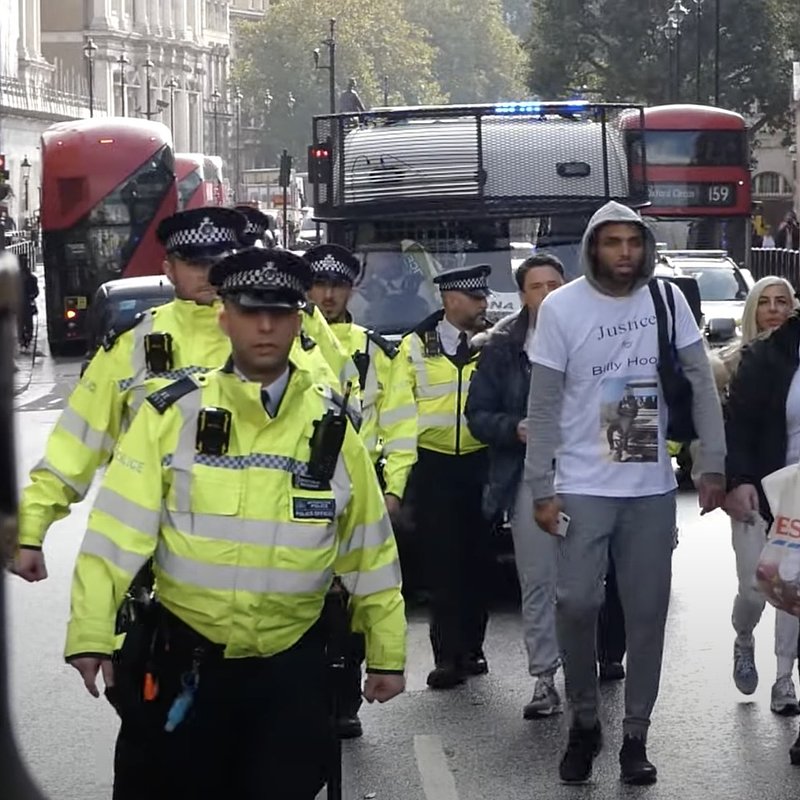 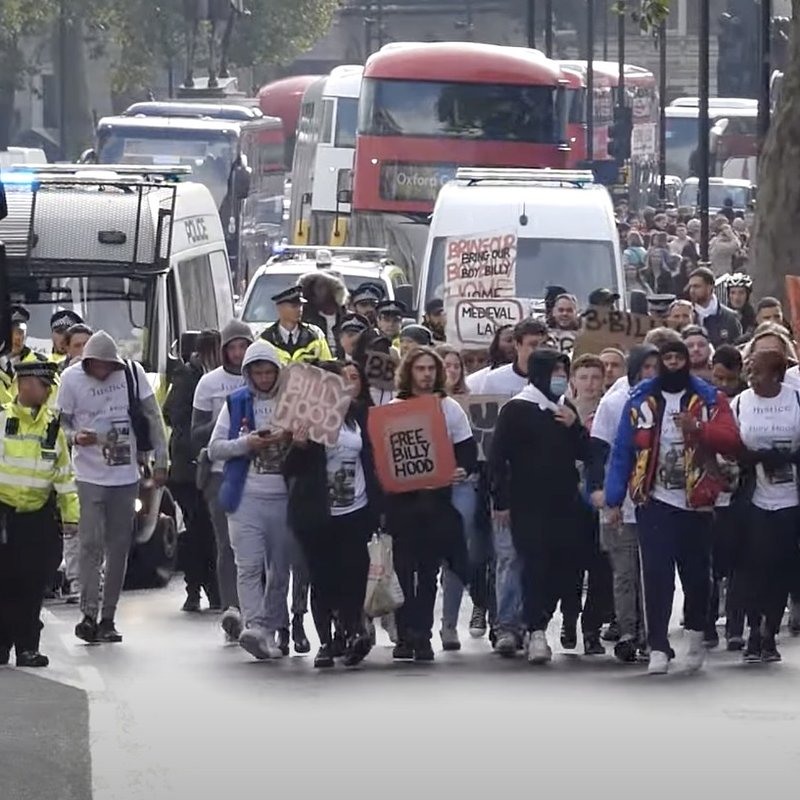 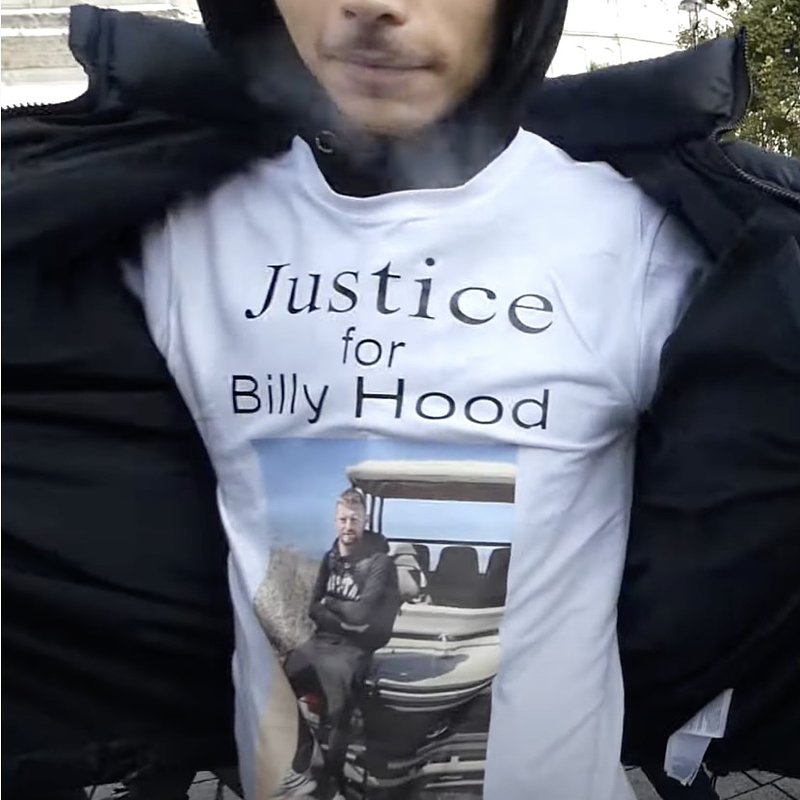 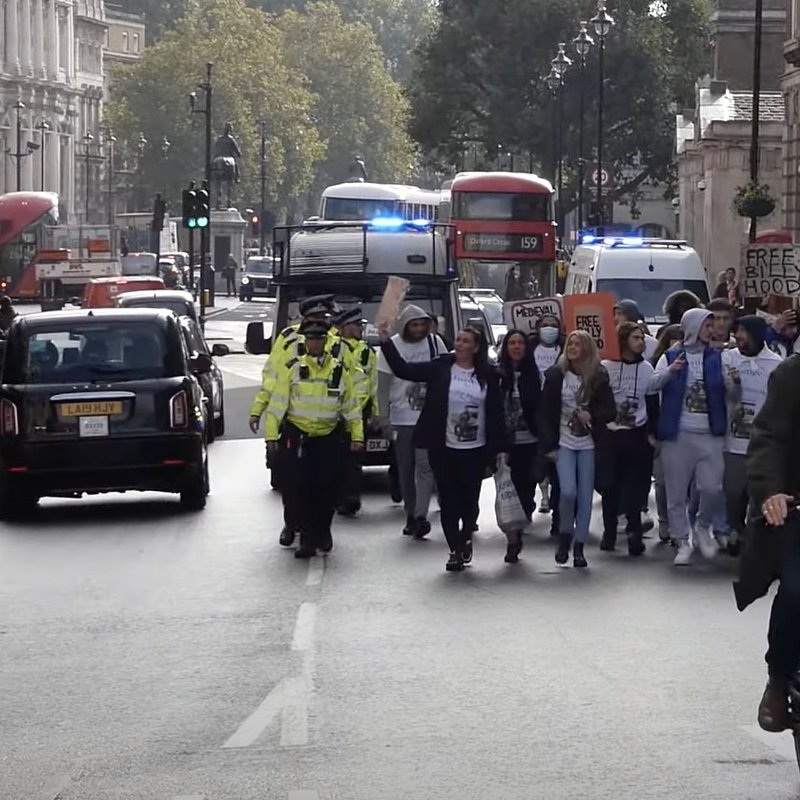 Abu Dhabi Courts accept Billy Hood did not traffic nor sell the CBD vape oil left in his car by a visiting friend. They accept that he “unintentionally possessed” the CBD but have sentenced him to TEN YEARS in prison, despite new legislation eliminating prison sentences ...

Detained in Dubai was founded following the arrest of Cat Le-Huy who was carrying jet lag remedy melatonin with him to Dubai. He was then accused of having “specs of marijuana dust” at the bottom of his bag, later proven to be untrue. Radha Stirling, CEO of Detained in D...