Taken from a US yacht: Princess Latifa & Hervé Jaubert - Did the US condone the attack?
Copy as Plain Text
Share 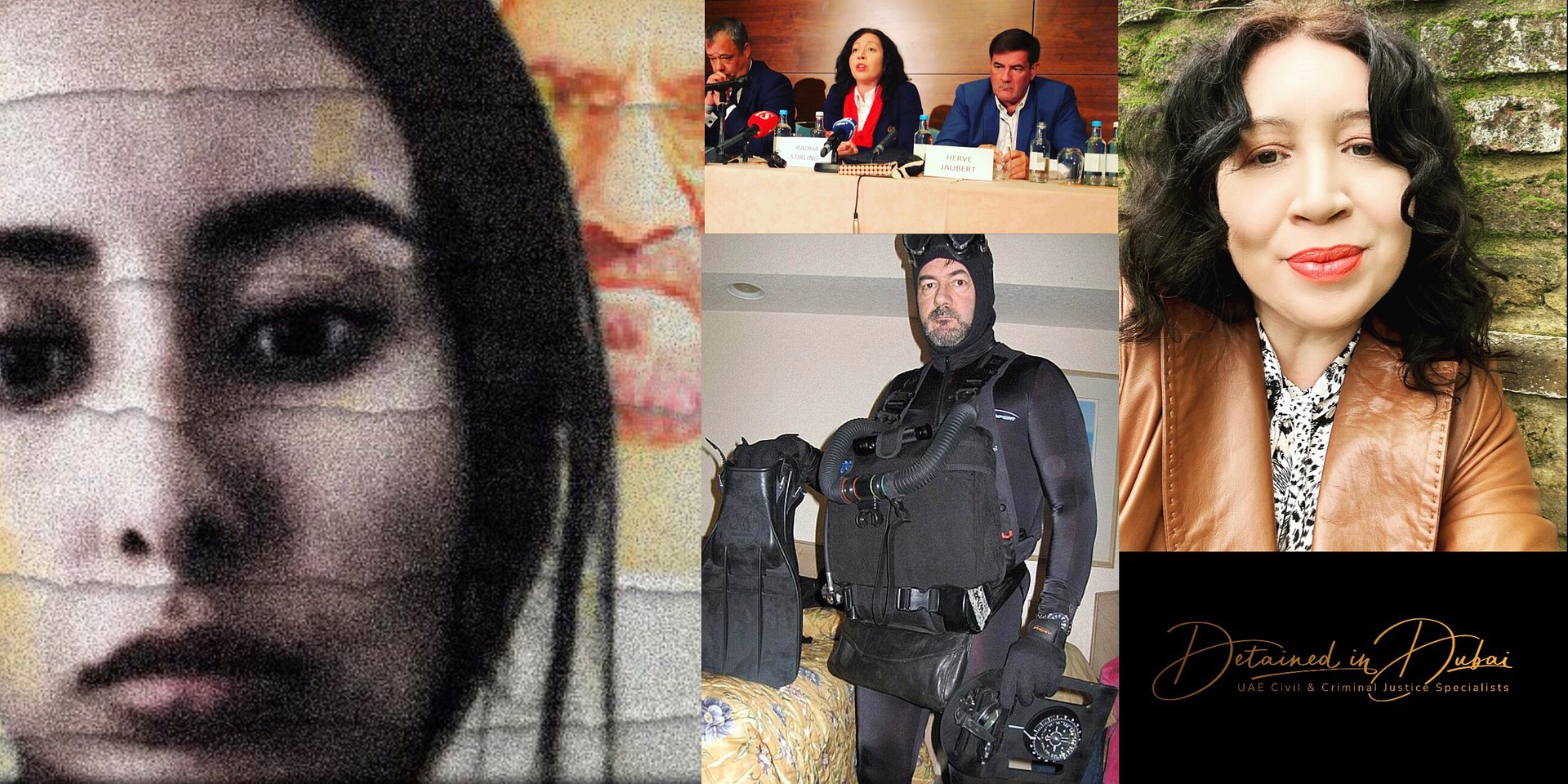 Princess Latifa and Cptn. Hervé Jaubert, abducted in unprecedented attack on US yacht

Taken from a US yacht: Princess Latifa & Hervé Jaubert - Did the US condone the attack?

“3 years ago, I received a shattering call from Princess Latifa in the midst of an unprecedented attack on a US yacht”, recalls Radha Stirling, founder of Detained in Dubai who Latifa called upon for help from the US flagged Nostromo. “It was a call nobody ever wants to receive. Latifa told me there were men outside and she didn’t know what was happening. She heard gunshots. I told her to hide, hang up the phone and make voicemails and videos that I could use as evidence. She swung into action and tried to record messages, but communications were abruptly stopped. Both Captain Hervé Jaubert and Princess Latifa were cut off. I sent a message to their phones, knowing that they would now be in the custody of their assailants. I wanted them to know we were aware of what had happened, that if anything happened to Hervé or Latifa, the world would know.
WhatsApp transcript between Latifa and Radha:
Latifa at 19:24 CET
Please Help
Please please there’s men outside I don’t know what’s happening
(WhatsApp call received)
Radha at 19:25 CET
Record
Send WhatsApp voice messages
Record what you can and send
Are you on a boat?
Did he go to land?
Are guns still firing?
Can you send video?
Call as soon as you can
Or I will have to alert police
??
We have filed a missing persons report for both you and Hervé but can withdraw it in the event that both of you are confirmed safe with audio or visual
We have shared all available evidence with a number of contacts across multiple countries. We have also scheduled a press release for automatic distribution to 30,000+ journalists at 3pm GMT that will be sent if we do not hear of your safety. If we hear from you, we will cancel the press release and withdraw the police report.

Stirling explains “it was a high adrenaline, chilling few minutes, and I hadn’t received a text message from Hervé since 18:08 CET. My subsequent messages to him were not received. Nevertheless, I hoped that my messages would be read by the assailants.
“This was a life and death situation and I was already concerned that Hervé, at least, may have been killed and dumped in the Indian ocean with the rest of the crew. Calls to the Indian Coastguard went ignored, but I ensured that all relevant authorities were informed of the situation and that our investigation continued. I managed to track the yacht and saw it returning to the UAE. If Hervé and Latifa were returned to Dubai, I feared they would both be ‘disappeared’. It was no small thing to rescue a daughter of Sheikh Mohammed and Hervé would be seen as a state enemy, a terrorist even, which would give them the justification to treat him however they liked.
“I contacted an American lawyer who Latifa had been in touch with in order to arrange her asylum application. She provided me with the chilling video that millions have now seen. I watched it alone, late at night for the first time, stunned at the content and indeed worried that I was the only one who held these damning allegations against the powerful ruler. I was worried about my own safety and so immediately asked a friend to release the video on YouTube. Not only would this guarantee my safety, but it would help reporters be persuaded to publish the story which would also secure their safety. I immediately shared the video with close journalists, who were still nervous to publish such a huge incident against such a powerful man.
“I instructed Toby Cadman, QC to open a United Nations application on behalf of Hervé Jaubert and Princess Latifa and he quickly swung into action. The FBI and US Coast Guard were notified and the case began gaining public support. A number of Twitter followers noticed the story and began assisting. It was gaining momentum. This story was not going away.
“The UAE responded to pressure, releasing the prisoners except for Latifa, but I continued to be worried for Hervé, who was returned to his yacht minus his safety equipment. I followed his every move, asking him to provide video testimony as he sailed to safety. It was only when he was finally on a plane to London, that I could breathe.
“They had to let him go. The United States government could not have an ally attacking a US flagged yacht and taking a US citizen from international waters to their own jurisdiction to keep him captive, or worse. Before the story broke, the United States was told that this was a kidnapping and extortion plan and that the attack on the yacht was in fact, a ‘rescue operation’, but as the evidence surfaced and after the release of Latifa’s testimony, they could no longer hold that line.

A former spy who claims he was threatened with execution for trying to help a Dubai princess flee to America in a daring sea rescue has opened up for the first time about his terrifying ordeal.

“We have seen now that this kind of belligerence can not be tolerated in any way. We can not have our gulf allies extending their jurisdiction beyond their borders and in essence, committing crimes outside of their countries. We have seen what happens when our allies are emboldened. We end up with a Khashoggi style incident. The US’s lack of intervention and criticism in the attack on Nostromo may have inspired Saudi Arabia’s bold actions. If the UAE can get away with the assault on Nostromo and the kidnapping of a US citizen, Saudi Arabia would have felt they could get away with murder, literally.

Having now passed 125 days since the brutal murder of Jamal Khashoggi by a Saudi hit squad in that country’s consulate in Istanbul.

“The question remains and is still the subject of speculation, how did the UAE locate Nostromo? In trying to fill in the blanks, some have speculated that it was Jaubert’s US mobile phone that gave away the position, but Hervé did not have his US phone with him. That was deactivated before the mission and sources have confirmed this was not how they located the yacht. Certainly they had narrowed down that Hervé Jaubert was involved, that he was at sea with the princess, somewhere in the Indian ocean. Christian Elombo, who had helped the girls jet ski to Nostromo, was now in custody after failing to safely leave Oman, and they had presented the escape mission as a ‘kidnapping and extortion plan’ to recruit help from their allies.
“When combining these factors, along with their knowledge that Tiina was with her, it would not take long to locate and execute an attack on the yacht. An investigation is ongoing into phones Tiina brought aboard the yacht from Dubai, that sources close to the UAE government have indicated were used to triangulate Nostromo’s position, as well as other theories. It is important to narrow down what external private companies were involved in disclosing Nostromo’s location, and whether they violated any laws in doing so.

Most women in Rahaf's situation don't make it out of the Middle East: lawyer - AM - ABC Radio

Human rights lawyer Radha Stirling says cases like Rahaf Alqunun's are increasingly common in the Middle East, but most women don't make it that far.

“It is my opinion though, that Sheikh Mohammed would have gone to any length to have Latifa returned to his custody. With the support of his allies and the pretence of a ‘rescue mission’, it is difficult to imagine a situation in which he did not achieve his goal.
“The attack by allied government forces on a US yacht in international waters is unprecedented. It is significant and it can not happen again, yet it has largely been forgotten amongst the calls for Latifa’s freedom with the United Nations. I raised the issue in Washington DC, at conferences, to think tanks and policy advisors. They are shocked and stunned that this happened, that they perhaps even assisted or condoned the attack, being persuaded that it was a rescue mission.
“If indeed, they did condone the attack and abduction of a US citizen, they made a huge mistake and should have undertaken their own investigations or made contact with Nostromo in advance. If they did not condone or were unaware, that’s even more concerning. That would mean the UAE and India were willing to violently attack a US yacht in international waters, without authorization from their ally. So which one is it?
“And what of Latifa now? The core of the issue here is that India attacked a US vessel and abducted Princess Latifa from it. She was taken forcibly as she explains in her latest video testimony, to the UAE. There was no legal basis for this unlawful transfer. If Latifa had been on US soil, would they have taken her from there too? Well, this raises the issue of Sheikha Shamsa having been taken from British soil decades ago. A kidnapping investigation was opened at the time, but nothing ever came of it and this clearly set precedent for the latest abduction.
“There are calls for the UAE to offer proof of life, after her latest video testimonies were released last month. It is unlikely that, given everything, Latifa would have been killed but she will be increasingly seen as a national security threat which, we hope, will not hinder her chances of freedom or otherwise, contribute to any ill treatment in Dubai.
“The United States had the best chance of securing her freedom. She was taken from a US yacht against her will and she should, arguably, be returned to US jurisdiction once more.”
Detained in Dubai is seeking a diplomatic resolution to this situation.

The Runaway Princesses of Dubai

A new ruling by the UK high court blows the lid off the long-suppressed secrets of Dubai's ruler, Sheikh Mohammed bin Rashid al Maktoum, and his divorce from his sixth and youngest wife, Princess Haya.

A legal representative for Sheikha Latifa, a Dubai princess who was feared missing, said a meeting with Mary Robinson, former UN High Commissioner for Human ...

In 2018 Princess Latifa Tried to Escape Dubai—Here's What Happened

The case of Princess Latifa, daughter of Sheikh Mohammed bin Rashid al-Maktoum, who has tried to run away twice, has made headlines around the world. In interviews with friends and family, Marie Claire finds out what really happened.