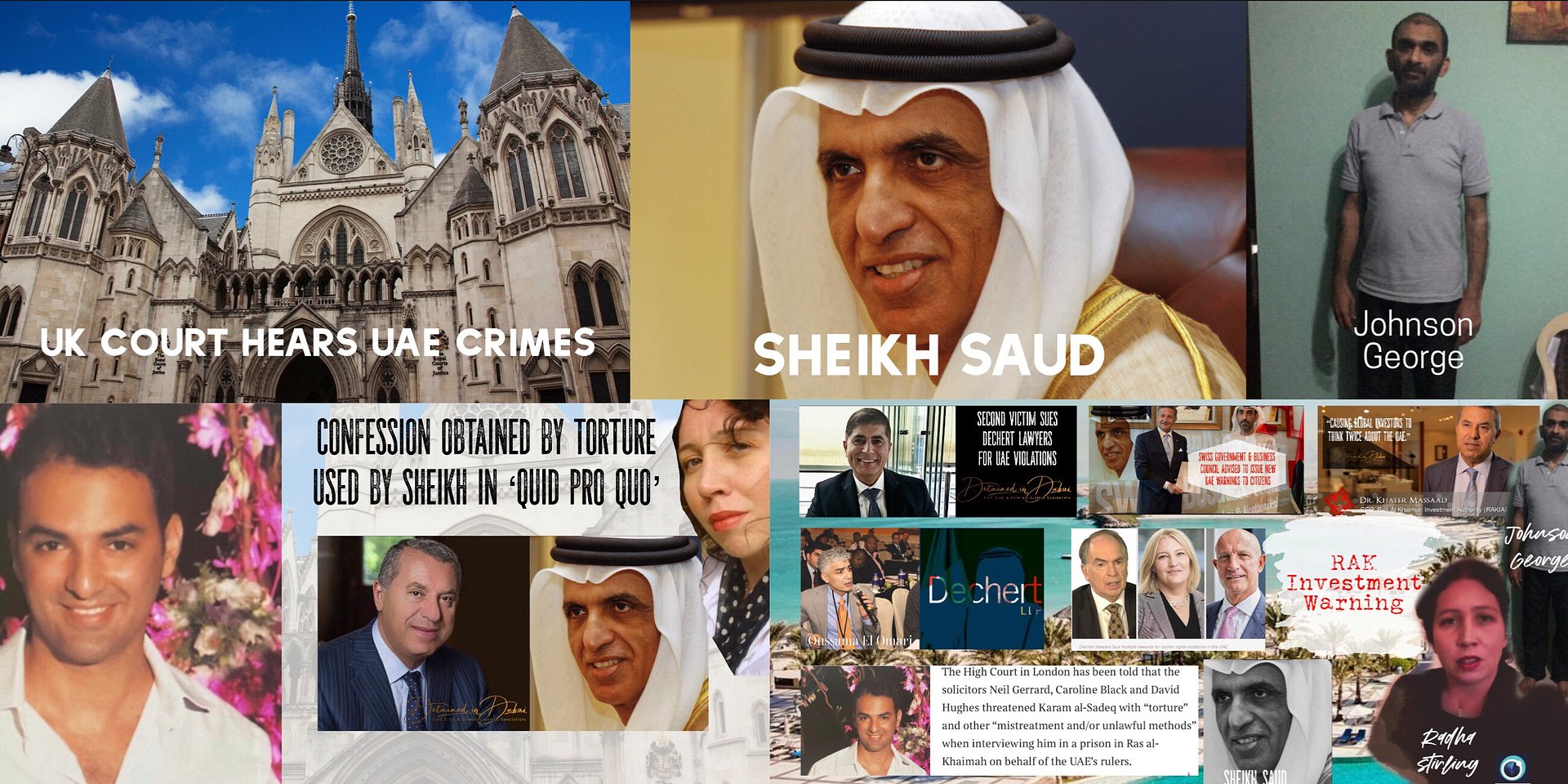 UK courts expose UAE hacking, forced confessions & torture
Ras Al Khaimah (RAK) litigation intensifies in the US, UK and Bangladesh, exposing criminal hacking, forced confessions, human rights violations and torture.
Ras Al Khaimah ruler, Sheikh Saud bin Saqr al Qasimi will stop at nothing it seems, as the English High Court hears evidence of targeted high tech crimes. Aviation magnate, Farhad Azima, urged the court of appeal to dismiss a lawsuit where evidence obtained by unlawful hacking is being relied upon by the Ras Al Khaimah Investment Authority (RAKIA).
“It is imperative that the English court disallow any evidence to be admitted to court if found likely to have been illegally obtained”, said Radha Stirling, CEO of Due Process International who represents a number of RAK litigants. “The same must be said for forced confessions obtained by the RAK government and British-American lawyers, Dechert. If we allow evidence obtained through force, torture or criminal hacking, to be admitted into litigation, we set a dangerous precedent for future criminal activity, putting people’s lives at risk.

The London office of international law firm Dechert and its controversial former global co-head of white-collar crime, Neil Gerrard, have had a second High Court claim filed against them for allegedly abusing the human rights of another political prisoner detained in...

“Former RAKIA CEO, Dr Khater Massaad, who is named as a hacking target in the Azima case, has been fighting off his own battles in Bangladesh where Sheikh Saud applied for a freezing order against Massaad’s business assets there. The issue here is that Massaad has already fought off the frivolous claims in Saudi Arabia, but Saud changed tactics, printed judgments in absentia against Massaad through his own personal courts, then sought to enforce those judgments abroad, thereby circumventing due process.

Former advisor to RAK ruler Sheikh Saud bin Saqr Al Qasimi and CEO of RAKIA and RAK Ceramics, Dr Khater Massaad, has been the target of a years-long campaign that has seen repeated legal abuses in an... | March 9, 2021

“Bangladesh and the United Kingdom need to understand the lengths that the regime will go to, in order to further their legal agendas. Jordanian Karam Al Sadeq has taken his own English High Court claim for his forced confession and torture. It is this forced confession, that Sheikh Saud is presenting to support his case in Bangladesh. Again, if Bangladesh and the UK allow such evidence to be submitted, they will be giving the green light for Ras Al Khaimah and their agents, to commit egregious serious crimes. They will be in essence, condoning hacking, condoning forced confessions and condoning torture.
“Azima claims the allegations of hacking are so grave that deposing Dechert’s Neil Gerrard must be ordered by the English courts. Gerrard was accused of ringleading the torture, interrogation and forced confession of Al Sadeq, on behalf of their client, Ras Al Khaimah.

“Serious and outrageous violations of international and local laws have taken place. The British and Bangladeshi courts are not considering a simple commercial or financial dispute. They are considering whether or not their countries will condone unlawful, belligerent and violent behaviour. In the cases of both Azima and of Massaad, the UK and Bangladesh must reject Sheikh Saud’s claims”.

Award-winning businessman and innovator, Dr Khater Massaad, has warned investors to stay away from Ras Al Khaimah after years of fighting off frivolous Interpol notices, extradition requests and international freezing orders that have no legal basis. The ruler of Ras Al Khaimah, Sheikh Saud bin Saqr al Qasimi, has asked Bangladesh to freeze the assets of former advisor Dr Khater Massad, and the man behind RAK Ceramics and RAKIA, in an attempt to seize money that simply doesn’t belong to him. Whi

The Gulf in Justice Podcast is producing a special 10 part exposé on Ras Al Khaimah with the ruler's former advisor, Dr Khater Massaad.  The never heard before material will be available on Spotify, Apple Podcast, Google Podcasts and YouTube.