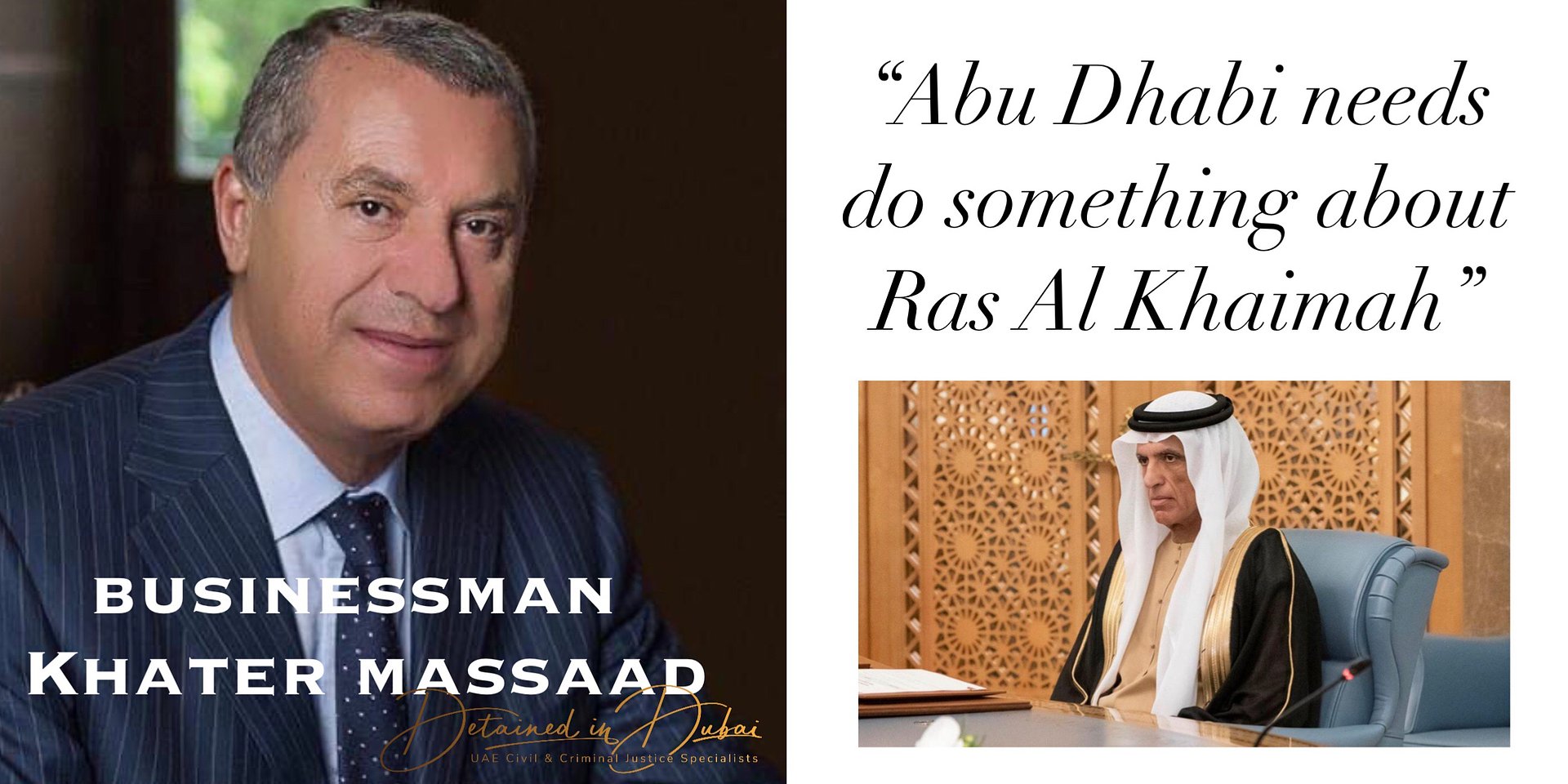 Khater Massaad, Oussama El Omari, Jihad Kuzmar, Karam Al Sadeq, Johnson George; these men built RAK as an investment hub, and the ruler will never forgive them for it. The government of Ras Al Khaimah, under Sheikh Saud bin Saqr al Qassimi has been waging a relentless campaign against everyone who put the tiny emirate on the map.  At a time when economies around the world are contracting and investors are already hesitant to risk their capital in shaky markets, RAK’s growing brushfire of litigation internationally is sending a strong signal that they do not want foreign business.  The question is: how long before Sheikh Saud’s problems become the UAE’s problems, and what is Abu Dhabi going to do about it?
Sheikh Saud bin Saqr al Qassimi

Khater Massaad, the one-time “Golden Boy of the Northern Emirates”, the architect of Ras Al Khaimah’s Free Trade Zone and Investment Authority, has been pursued for years by Sheikh Saud in a paranoid campaign of lawsuits and disinformation.  Claiming that Massaad, who secured billions of dollars in investment for the backwater emirate of RAK, had embezzled funds and mismanaged the Investment Authority, all because Saud suspected Massaad of sympathising with Saud’s brother, Sheikh Khalid, who was challenging him for the throne.

RAK brought cases against Massaad in Saudi Arabia after he left the UAE, only to later admit in court that they had no evidence against him.  The cases were dismissed, but Saud launched them again in his own courts in RAK where he could control the outcome.  As a result, Khater Massaad’s assets have been frozen, and his current investment projects in Bangladesh have been halted as courts in Dhaka adjudicate the claims.  Radha Stirling, CEO of Detained in Dubai, commented, “Khater Massaad’s projects in Bangladesh have no connection whatsoever with Ras Al Khaimah, it is outrageous that Sheikh Saud is allowed to continue interfering with businesses around the world simply because an investor once worked for him.  His claims have already been thrown out by an impartial court, and the judgment of RAK courts, which Saud directly controls, cannot be taken seriously.  We have seen thoroughly corrupt decisions by Sheikh Saud’s judges time and time again, particularly against the executive staff of the Ras Al Khaimah Free Trade Zone Authority  (RAKFTZA) and the Ras Al Khaimah Investment Authority (RAKIA), stemming from his political purge of those bodies during his effort to consolidate power after seizing the throne.”

Saud’s heavy-handed tactics have led to multiple lawsuits against him in the United States and Great Britain, where his regime is accused of torture, unlawful detention, and severe human rights violations.  “Former employees of RAKIA and RAKFTZA are either in prison or under arrest warrants, their families have been threatened, they have been beaten, intimidated, and forced to make false confessions and testimony to wrongfully incriminate their superiors, essentially to cover up the misappropriation of funds and poor investment decisions by Sheikh Saud himself, and his son” Stirling explained.  “The corruption has spun a web from New York to Tbilisi, from Washington D.C. to India, and now to Bangladesh.  Major international law firms like Dechert have found themselves implicated in grave abuses; there have been allegations of hacking, espionage, and questionable political lobbying and bribery.  I honestly don’t know how much longer the federal government in Abu Dhabi can tolerate these scandals, because as foreign investors steer clear of Ras Al Khaimah as a result, the otherwise poor emirate will inevitably be looking for handouts from UAE Ruler Sheikh Khalifa bin Zayed.  But, unless Sheikh Saud is disciplined in some way, RAK has the potential to seriously undermine investor confidence in the country as a whole.”

American law firm Dechert is currently embroiled in litigation in the High Court of England over the involvement of three former employees, Neil Gerrard, David Hughes and Caroline Black, in the interrogations of Karam Al Sadeq and Jihad Kuzmar on behalf of Sheikh Saud in which both men were allegedly tortured.  The two men claim that they were threatened with life imprisonment if they did not corroborate false accusations against Khater Massaad and Sheikh Faisal, Saud’s other brother who was RAK’s former de facto finance minister. Both AL Sadeq and Kuzmar remain in RAK detention.

Oussama El Omari was hired by Sheikh Faisal to run RAKFTZA in 2004, successfully attracting foreign investors throughout his tenure up until the royal power struggle began with the 2010 death of the ruler and Sheikh Saud’s seizure of control.  Shortly thereafter, El Omari was fired by Saud, and subsequently accused of embezzlement and mismanagement, along with Khater Massaad.  El Omari is currently suing Saud in the United States in a case that includes evidence of Saud’s use of PR agencies and paid journalists to slander his enemies, and his use of Interpol Red Notices to extort and blackmail anyone whom he cannot jail directly.

“Investors need to know that RAK is not a safe destination for their capital,” Stirling cautioned, “We have cases that have nothing to do with Sheikh Saud’s political persecution of his business rivals. For example, Reda Boulahdid, a private businessman who was preyed upon by corrupt Customs officials who demanded a percentage of his revenues.  His wife was abducted by authorities, his home ransacked, his property confiscated, and ultimately, his company destroyed because he refused to capitulate.  From the top-down, RAK is rife with corruption and foreign investment is treated like a donation.  Everything the UAE is trying to do to promote itself as a business-friendly hub for foreign capital is being sabotaged by the atrocious, out-of-control behaviour of Ras Al Khaimah.  The only way this gets resolved is for Abu Dhabi to step in and make Sheikh Saud get with the program; otherwise his renegade emirate will eventually destroy the UAE brand globally.”

The London office of Dechert, a major international law firm allegedly crossed the line into criminal abuse and torture in their work for Ras Al Khaimah’s ruler, Sheikh Saud bin Saqr Al Qassimi; according to a lawsuit filed against the Firm in London today, naming two prominent London lawyers among the defendants. This

Detained in Dubai: Stories of Injustice in the Gulf: Part V

Detained in Dubai: Stories of Injustice in the Gulf: Part V