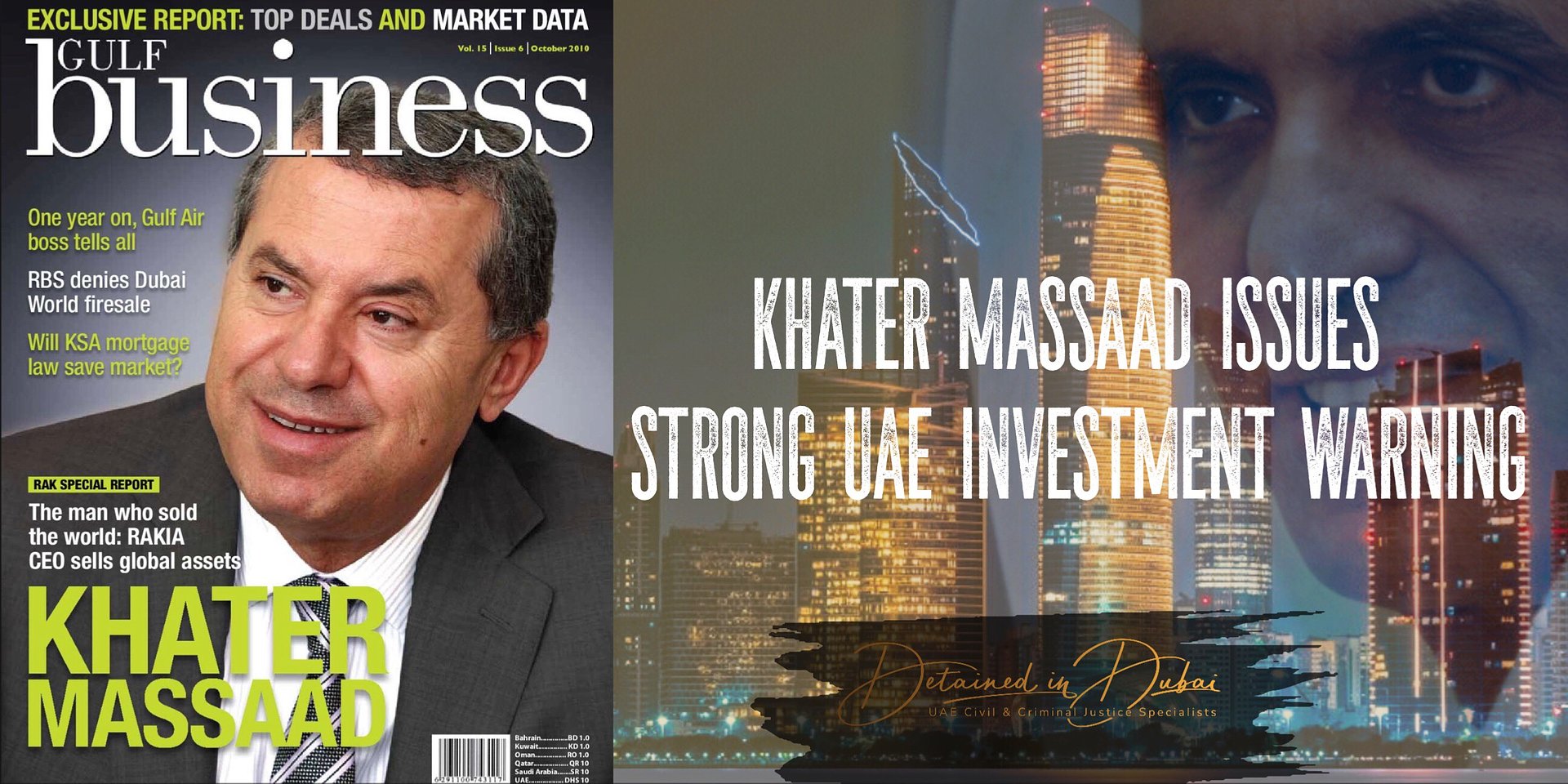 In his rise to power, Sheikh Saud felt insecure and threatened by his rival brother, Sheikh Khalid.  He desperately needed to prove himself to his subjects, embarking on expansive developments in the Emirate and further abroad, recruiting assistance from experienced businessmen like Dr Massaad, who helped Saud develop RAK Ceramics, RAKIA, Al Hamra Village and RAKEEN and making the Emirate billions of dollars.

Khater Massaad was not paid for his work in generation, literally billions of dollars for Sheikh Saud, but owned a small share in RAK ceramics which he eventually sold.

Saud’s nature is reckless, “he doesn’t feel laws apply to him and nor does he believe in consequences or even basic morality”, said Radha Stirling, Expert Witness and CEO of Detained in Dubai.  “When visiting America, the Sheikh was arrested and detained for sexually assaulting a hotel maid. What did he do? He claimed diplomatic immunity!  After failing to obtain immunity, he begged his friends for help bail him out and get him on the next flight back to the UAE.”  Sheikh Saud avoids travel to the US now.

Saud’s overzealous dreams of investing overseas, left him open to criticism in his Emirate.  He felt he needed to pacify his critics and invest back home, so prematurely pulled out of his investments while in the midst of unfinished developments.  Never a smart investment move.  To compensate him for any losses, the ruler unleashed hell on those who helped him, seeking to blame them for his financial mishaps.

Unchecked by Abu Dhabi, unbridled and with no fear of repercussions, Sheikh Saud’s conniving plan was actioned.  Saud levied false allegations against foreign nationals who had helped him, worked for him, been at his beck and call for years, people who had made him rich, lawyers, accountants and advisors  He froze their assets, seized their funds and jailed them.

Those outside of the country were harder for him but he would find a way to get hold of their funds.  He was on a rampage, drunk with power.  He was insecure, his legitimacy questioned by his brother’s loyalists, resulting in his extreme recklessness.  He sought to recover funds by using his law courts to issue judgments in his favour, having complete autonomy over the legal system, with judges appointed and paid directly by him.  Once a conviction in absentia was issued, Saud instantly reported it to Interpol. He had several victims detained abroad, one was held for nearly a year before finally being released, after refusing to succumb to intense pressure to confess to crimes he hadn't committed.  Khater Massaad was reported to Interpol again and again.  Every time Interpol acknowledged it was a wrongfully issued red notice and cancel it, Saud would issue a fresh one with new paperwork.

Khater Massaad has been fighting off Interpol notices, extradition requests and civil cases from the UAE for years.  He was arrested and detained in Saudi Arabia who found no crimes had been committed and denied the extradition.  The UAE did not have a case and could not win in the civil courts in KSA due to having no genuine supportive evidence.  They withdrew the case, apologised to Saudi authorities and then took the very same case back to the local courts in Ras Al Khaimah to secure a legal judgment there, in absentia of course.

The UAE then, seemingly, and considering the massive investments in Bangladesh recently, agreed a quid pro quo deal with Bangladesh’s government to freeze assets that were thought to have been funded by Dr Massaad.  “Dr Massaad found out about a Bangladeshi legal judgment after seeing a press release from the government, praising their intensified cooperation with the UAE.  Too often have we seen the UAE seek political cooperation with foreign countries where legal cases are decided by politics.  Princess Latifa was forcibly and unlawfully kidnapped by Indian forces at the request of Sheikh Mohammed who then ordered several extraditions to India in return.  Legal ‘deals’ that rely on the UAE being honest and their court judgments being genuine are a serious danger and an abuse of countries who feel they are doing the right thing in cooperating against criminals.  The problem is, they are not criminals and without due process, any country who cooperates with the UAE, is rendering themselves unviable for investment”, added Stirling.

In documents covertly filed in Bangladesh, the UAE evidence relied upon a forced confession from Jordanian lawyer Karam Al Sadeq.  Al Sadeq, still unfairly detained in a RAK prison, filed a claim in the High Court of England that he had subjected to major human rights violations and torture, resulting in forced confessions.  Al Sadeq has also prepared a United Nations claim for his “lengthy and unfair detention”.  “Relying on a forced confession to secure funds that do not belong to the Sheikh and that have been procured by torture, is astonishing to say the least.  If Bangladesh awards any of the funds Saud seeks to claim, they will be giving the green light to the UAE that they support human rights violations and torture.  This decision has far reaching implications and the Bangladeshi government can not turn a blind eye to the multiple legal claims against Sheikh Saud and his personal justice system”.

Dr Massaad has suffered years of targeted abuse from the RAK ruler, including the same smear campaigns that RAK victim Oussama El Omari suffered.  Just last month, El Omari won a New York judgment over the smear and defamation campaign launched upon him by the belligerent ruler.

Dr Massaad has finally had enough.  “Abu Dhabi can not allow Ras Al Khaimah to act in a way that reflects badly on the Emirates as a whole. This is a black and white case.  I have committed no wrongdoing but the Sheikh is on a personal vendetta, and is acting against the laws of the UAE. Sheikh Saud is embarrassing Abu Dhabi and it is having an effect on investment.  Every law that RAK violates, every Interpol notice issued, every attempt to steal foreign assets, is being covered in the foreign courts and media.  It’s not healthy for the country”.

Stirling added, “Abu Dhabi needs to pull the reins in on this one.  They have just signed the Abraham Accord, are seeking Israeli and foreign investment and increasing efforts to stimulate the economy.  We have formed an independent council called “Gulf Investment Monitor’, with experienced board members, which provides members with risk information in the region as well as hosting a working group and regular conferences.  Certainly, one of the first topics for this group will be pertaining to the UAE’s aggressive seizure of foreign assets via local kangaroo courts.  We certainly urge Abu Dhabi to end Sheikh Saud’s reckless and extrajudicial actions.  He is only digging a deeper hole”.

Dr Khater Massaad is preparing a defence to the government of Ras Al Khaimah’s freezing order against assets held in Bangladesh, most of which he has no ownership or shareholding in.  The court will resume on the 4th of February.  Stirling is to provide expert testimony.

The Business Magazine for the GCC