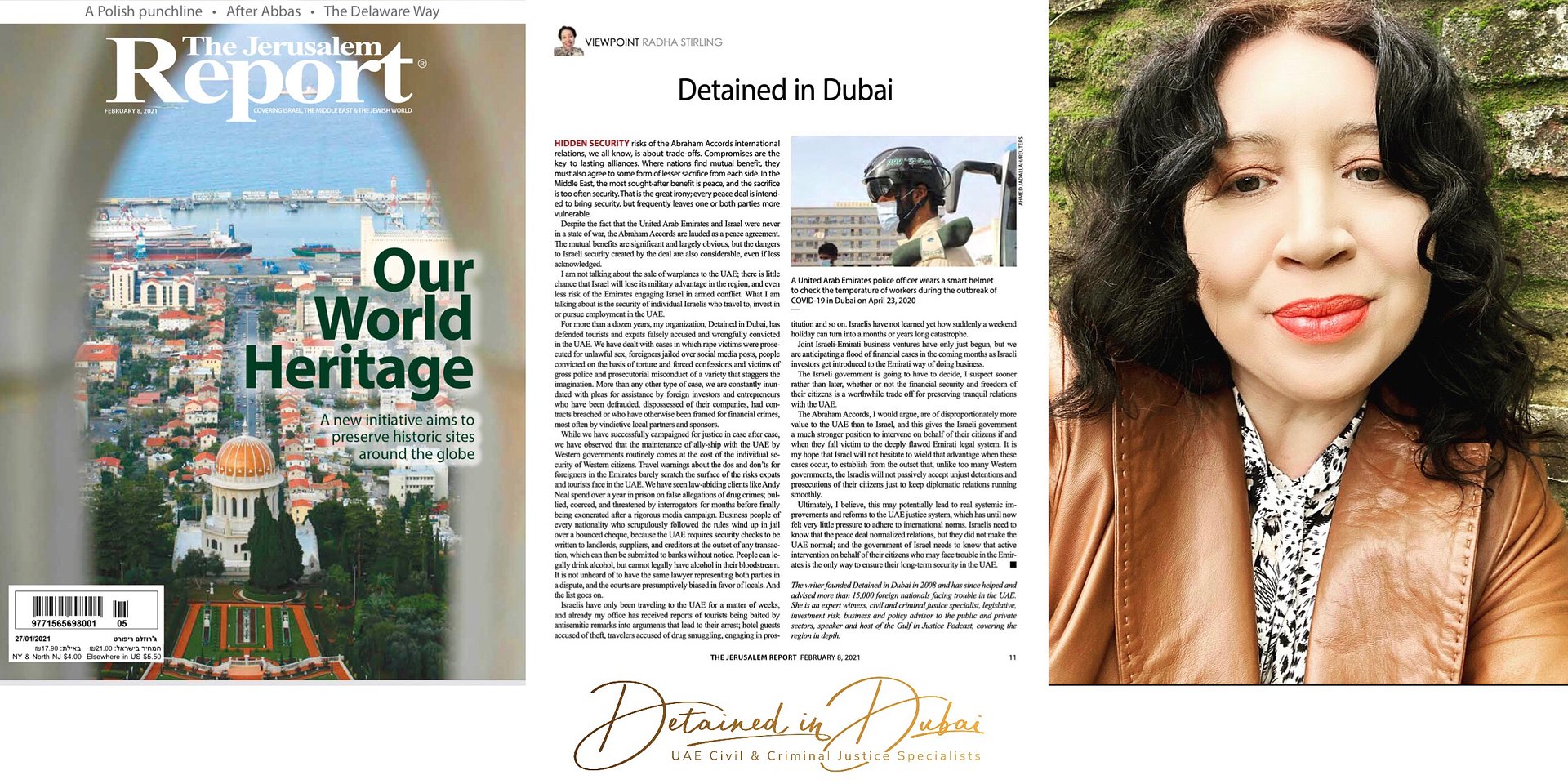 Detained in Dubai - by Radha Stirling - The Jerusalem Report
8 Feb 2021
HIDDEN SECURITY risks of the Abraham Accords international relations, we all know, is about trade-offs. Compromises are the key to lasting alliances. Where nations find mutual benefit, they must also agree to some form of lesser sacrifice from each side. In the Middle East, the most sought-after benefit is peace, and the sacrifice is too often security. That is the great irony; every peace deal is intend- ed to bring security, but frequently leaves one or both parties more vulnerable.
Despite the fact that the United Arab Emirates and Israel were never in a state of war, the Abraham Accords are lauded as a peace agreement. The mutual benefits are significant and largely obvious, but the dangers to Israeli security created by the deal are also considerable, even if less acknowledged.
I am not talking about the sale of warplanes to the UAE; there is little chance that Israel will lose its military advantage in the region, and even less risk of the Emirates engaging Israel in armed conflict. What I am talking about is the security of individual Israelis who travel to, invest in or pursue employment in the UAE.
For more than a dozen years, my organization, Detained in Dubai, has defended tourists and expats falsely accused and wrongfully convicted in the UAE. We have dealt with cases in which rape victims were prosecuted for unlawful sex, foreigners jailed over social media posts, people convicted on the basis of torture and forced confessions and victims of gross police and prosecutorial misconduct of a variety that staggers the imagination. More than any other type of case, we are constantly inundated with pleas for assistance by foreign investors and entrepreneurs who have been defrauded, dispossessed of their companies, had contracts breached or who have otherwise been framed for financial crimes, most often by vindictive local partners and sponsors.
While we have successfully campaigned for justice in case after case, we have observed that the maintenance of ally-ship with the UAE by Western governments routinely comes at the cost of the individual security of Western citizens. Travel warnings about the dos and don’ts for foreigners in the Emirates barely scratch the surface of the risks expats and tourists face in the UAE. We have seen law abiding clients like Andy Neal spend over a year in prison on false allegations of drug crimes; bullied, coerced, and threatened by interrogators for months before finally being exonerated after a rigorous media campaign. Business people of every nationality who scrupulously followed the rules wind up in jail over a bounced cheque, because the UAE requires security checks to be written to landlords, suppliers, and creditors at the outset of any transaction, which can then be submitted to banks without notice. People can legally drink alcohol, but cannot legally have alcohol in their bloodstream. It is not unheard of to have the same lawyer representing both parties in a dispute, and the courts are presumptively biased in favor of locals. And the list goes on.
Israelis have only been traveling to the UAE for a matter of weeks, and already my office has received reports of tourists being baited by antisemitic remarks into arguments that lead to their arrest; hotel guests accused of theft, travelers accused of drug smuggling, engaging in prostitution and so on. Israelis have not learned yet how suddenly a weekend holiday can turn into a months or years long catastrophe.
Joint Israeli-Emirati business ventures have only just begun, but we are anticipating a flood of financial cases in the coming months as Israeli investors get introduced to the Emirati way of doing business.
The Israeli government is going to have to decide, I suspect sooner rather than later, whether or not the financial security and freedom of their citizens is a worthwhile trade off for preserving tranquil relations with the UAE.
The Abraham Accords, I would argue, are of disproportionately more value to the UAE than to Israel, and this gives the Israeli government a much stronger position to intervene on behalf of their citizens if and when they fall victim to the deeply flawed Emirati legal system. It is my hope that Israel will not hesitate to wield that advantage when these cases occur, to establish from the outset that, unlike too many Western governments, the Israelis will not passively accept unjust detentions and prosecutions of their citizens just to keep diplomatic relations running smoothly.
Ultimately, I believe, this may potentially lead to real systemic improvements and reforms to the UAE justice system, which has until now felt very little pressure to adhere to international norms. Israelis need to know that the peace deal normalized relations, but they did not make the UAE normal; and the government of Israel needs to know that active intervention on behalf of their citizens who may face trouble in the Emirates is the only way to ensure their long-term security in the UAE.
The writer founded Detained in Dubai in 2008 and has since helped and advised more than 15,000 foreign nationals facing trouble in the UAE. She is an expert witness, civil and criminal justice specialist, legislative, investment risk, business and policy advisor to the public and private sectors, speaker and host of the Gulf in Justice Podcast, covering the region in depth.

Gulf in Justice Podcast reveals Israelis keen to do business with the UAE might be jumping in the deep end, risking their reputations and even their lives.  UAE expert Radha Stirling, discusses the issue in depth.Detained in Dubai CEO, Radha Stirling, has warned Isra...

The small northern emirate of Ras Al Khaimah is aggressively soliciting foreign investment, but eager Israeli investors should be wary. The government of RAK, under Sheikh Saud bin Saqr al Qassimi has been waging a relentless campaign against everyone who put the tin...