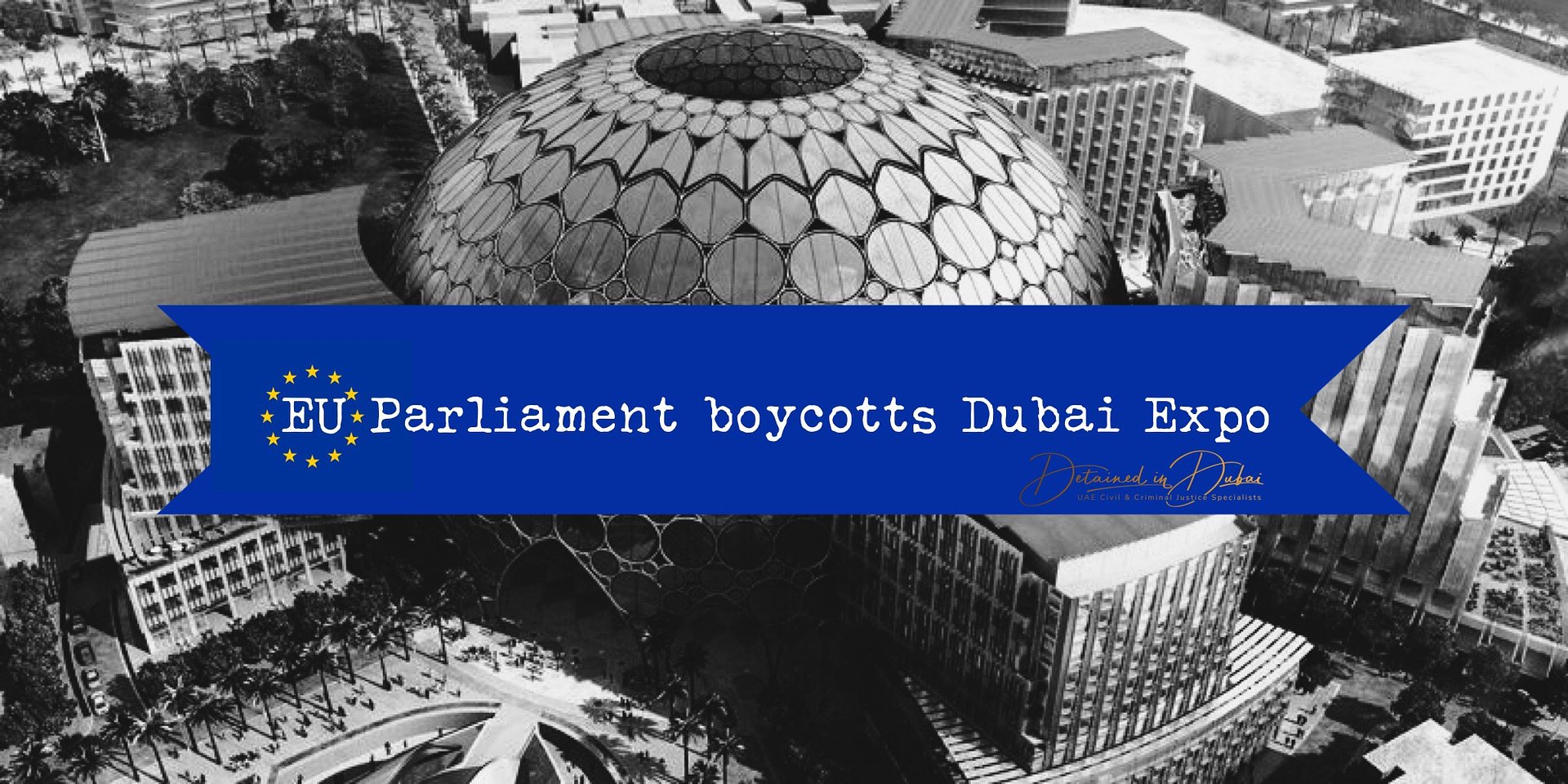 "Our organisation has consistently highlighted the systematic human rights abuses of the United Arab Emirates for more than a decade.  The UAE is a country in which due process and the rule of law are non-existent, torture is routine, forced confessions are the norm, persecution of women, minorities, academics and journalists is standard procedure.
"We have actively lobbied governments in Europe, the UK, Australia, Canada, and America to start holding the UAE accountable for its rampant violations and abuse, and we are heartened to see those efforts finally moving Western leaders to act.  We welcome the call by the EU Parliament to boycott the World Expo in Dubai, it is truly a victory for the thousands of victims who have suffered life-changing injustice in the UAE.  It is particularly significant because the most prevalent abuses in the country involve expat business people and investors; people who contributed their capital, knowledge and skills to the Emirates after being lured by precisely these sorts of promotional events that perpetuate the dangerously false image of the UAE as a safe and stable modern destination; only to find themselves robbed of their money, dispossessed of their businesses, extorted, jailed, or wrongfully listed on Interpol by unscrupulous local partners backed by a biased legal system.

"This decision by the EU Parliament will send a strong message to companies around the world that the UAE is, in fact, a despotic state where neither their investments nor their very lives and freedom are safe."

European Parliament votes to boycott UAE Expo due to human rights issues
JERUSALEM POST - SEPTEMBER 17, 2021
Expo 2020 is expected to take place between October 2021 and March 2022 and is part of the rotating World's Expo. It was created to display the culture and achievements of the participating nations.

However, the decision by the BIE (Bureau International des Expositions) to hold this year's expo in Dubai has drawn backlash from human rights groups due to the UAE's treatment of women and migrant workers, as well as its role in the Yemeni war.
Husain Abdulla, Executive Director at European Center for Democracy & Human Rights (ECDHR) said in a statement, “This resolution is an important step toward holding the UAE government accountable for its ongoing systematic human rights violations against its own citizens and its utter disregard to international law.

The UAE government has embraced an array of tactics to whitewash and cover its horrible human rights record, one of the leading methods being Dubai Expo 2020. Today’s vote by the European Parliament urging businesses and European member states to withdraw from this blood-tinted expo is a victory for human rights in the UAE, Europe and everywhere.”

NGOs have been calling for the government and leaders to boycott the Expo.
“The European Parliament has taken a strong stand today against the brutal dictators of Dubai. The UAE monarchy has engaged in a cascade of human rights violations, including widespread abuses against women and war crimes in Yemen. The UAE Dubai Expo is organized by a member of the ruling family who himself has been accused of rape," said Sunjeev Bery, Executive Director at Freedom Forward, a lead NGO organizer of the boycott effort."

Without attention on these violations, there will be no accountability. And without accountability, there will be no justice and no end to the UAE'S human rights abuses. These European parliamentarians have set the standard for responsible leadership when it comes to holding the UAE abusers behind the Dubai Expo accountable. It is shocking that any other invitees, be they CEO or diplomat, would even consider legitimizing criminals by attending this dictator expo.”

Dubai's long anticipated expo is finally in full swing, but so is the worldwide media in highlighting human rights abuses and even boycotting the expo.