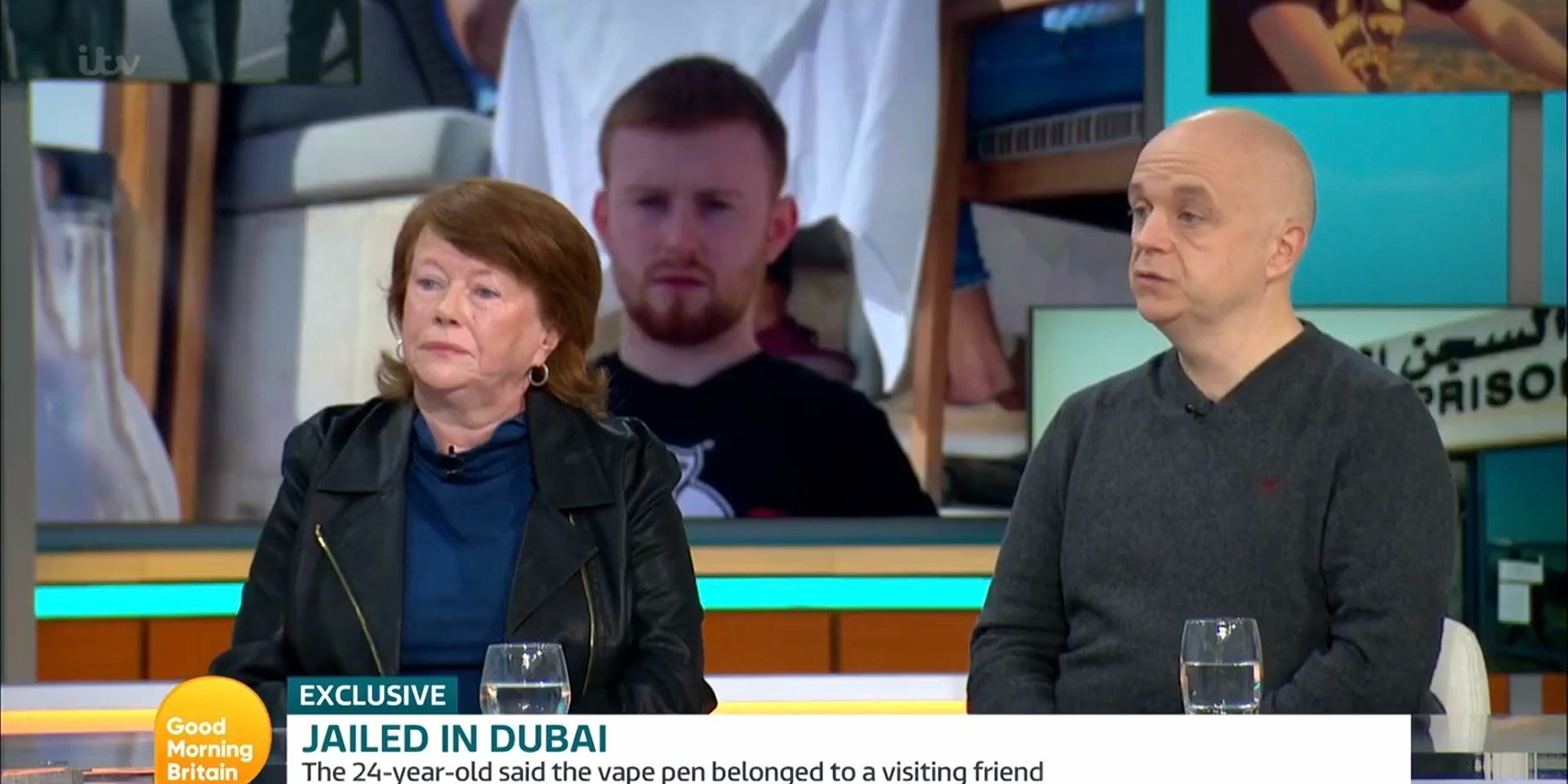 The UAE’s government controlled newspaper published a self praising article in response to the media coverage of Billy Hood’s 25 year sentence in Dubai, claiming he was “treated well” by authorities, angering Billy’s family who know first hand, this was not the case.
“We are angered by the UAE’s response to Billy’s situation which has been to justify their mistreatment of Billy and spread propaganda rather than address the injustice of this case”, said David Guckion, Billy’s uncle. “We know full well that it’s impossible for the UAE to have a genuine witness against Billy and we know Dubai’s police generate false witness testimony to secure convictions. We have never been told who this supposed witness even is. The fact is, Billy was never in touch with anyone to arrange to sell vape ware and there is zero evidence of that. The Dubai authorities then go on to say Billy had ‘substantial amounts of cash’ but again, this is Dubai trying to slander and paint a false impression of him. They are trying to call his £4,000 in wages paid by his employer, ‘substantial’. His employer even made a statement that Billy had been paid in cash for his job as a football coach and it’s reflected in his contract. If this is the kind of evidence Dubai police are relying upon to lock someone up for selling, then we’re all guilty.
“Authorities first say it was CBD vape ware and now they are calling it something else. It seems like they are just trying to salvage their own terrible reputation after embarrassing the whole country with this ridiculous arrest. Police then try to divert attention to canisters in the car that were unopened and scheduled for delivery to a catering company. They are perfectly legal and are sold in Dubai. The catering company has even vouched for that and the canisters are not part of any charges or convictions, they’re just attempting to divert attention from their atrocious treatment of Billy.
“Billy’s drug tests all returned negative. Anyone who knows Billy has vouched for him and his 100% anti-drug policy. It is absolutely absurd that the police have not only ruined his life but also slandered him and his reputation. It’s not acceptable that Billy has been held for more than nine months over 4 small bottles of vape oil that were not even his and that he has no interest in.
“We are utterly disgusted by the UAE pretending they did not beat him, threaten him and deprive him of contact with the outside world, a lawyer and the embassy. They then forced him to confess in Arabic and have held him in torturous conditions for nine months.

“We have called on the British government to increase travel warnings to British citizens. Nobody should be visiting the UAE when people are at risk of losing their lives through no fault of their own.”

The Government should review and enhance warnings in foreign travel advice for the United Arab Emirates, so British citizens can make informed decisions about traveling to or living in the Emirates.

His mother Breda whose primary concern is getting him home, also reflected on how Billy has felt about being accused of a drugs related crime, “He’s devastated. He has worked so hard and even if exonerated, his career coaching and working at schools with children is at risk. You can cope with that if you’re guilty, but not if you’re innocent”.
In a handwritten letter from prison, Billy said “I coach football 6-7 days a week, I am always working with kids and in school all over Dubai. From the age of 16, I played football at a professional level for more than 2+ years. I have always had a zero % tolerance on any drugs / illegal substances. For me to be accused of promoting/selling drugs in a country that have the same beliefs/values as me on drugs, which is very upsetting as it affects my future. The main reason I moved to the UAE was to pursue my coaching career in football coaching. I have spent 6+ years collecting my coaching badges and would never let something such as drugs ruin everything”. 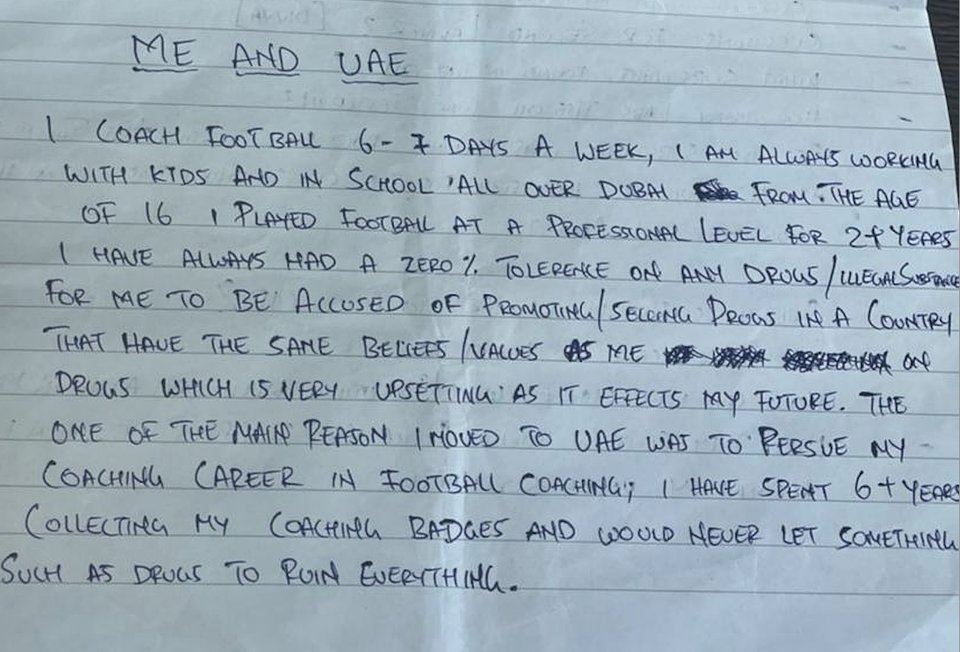 British and American courts have been asked to rule on the treatment of two men held in the UAE as pawns by an ambitious ruler who has, last month, used “forced confessions obtained by torture”, in ‘quid pro quo’ attempts to seize funds that don’t belong to him. Dechert lawyers have been sued by two lawyers for human rights violations, forced confessions and torture. Last week, it was revealed that these “confessions” obtained by force, have now been submitted as “evidence” to seize money from a

British courts have refused to extradite to the UAE based on ‘forced confessions, unfair trials, discrimination and the real risk of human rights violations and torture’ and yet, the UAE continues to profess their good treatment of prisoners and genuine legal process. “Forced confessions are almost automatic in the UAE to the point where the British courts have acknowledged its repeated practice”, said Radha Stirling, CEO of Detained in Dubai and Expert Witness. “This is especially the case in drugs related cases where police are incentivised to secure convictions at any cost”, she added. “There have been countless cases of British nationals being forced to confess in Arabic, even going back to my very first case of Cat Le-Huey. It’s a joke that the UAE pretends they offer translators”.

“Their alleged third party witness testimony against Billy is laughable. In the case of veteran Andy Neal, they said the same thing but it turned out the witness had been coerced to enter a testimony. He later withdrew his statement saying ‘it was the wrong Andy Neal’. After more than a year of trauma behind bars, the PTSD sufferer was finally exonerated and returned to the UK. This is what we are dealing with and this is our supposed ally.

Married dad-of-two Andrew Neal - who spent 24 years serving in the British Army - was wrongfully detained by police in October and remains in prison, according to campaigners

“Derrin Crawford was arrested when the police allegedly found her date in possession of Cannabis that she had nothing to do with. It’s senseless that Dubai’s police cast their net so wide they end up arresting sometimes 20 or more people, just because they happen to know someone who has a few grams of marijuana.

Andy Neal, 44, has been cleared of all charges after he was arrested in October 2018 by Dubai police on false drug charges. The father-of-two spent over a year in prisons across the UAE.

“In Billy’s case, we have reviewed the prosecution’s documents and they have zero evidence of trafficking and selling. It is not a crime to have £4,000 in cash. Billy has been living in the UAE and clearly did not traffick the 4 small vapeware bottles. Nobody should be punished because one of their friends negligently left their own vapeware behind. We have seen multiple cases of friend’s being charged or convicted because one of their friends possessed marijuana unbeknownst to them. We do not live in a society where friends can be jailed for the crimes of their friends. but unfortunately in Dubai, this is not the case.

Radha Stirling, CEO of Detained in Dubai who had been helping the Crawford family, comments on release of Derrin Crawford.

“In Dubai, we see family members being arrested over the debts of their spouses, children, parents or siblings and this makes Dubai a rather treacherous place to visit or live in. Even when one personally follows the letter of the law like Billy has, they can be the one who pays the price.
“Baroness Whitaker and Andy Slaughter, MP, have called for the foreign office to increase travel warnings and Billy’s family have asked people to sign the petition to support this submission. Increased travel warnings will highlight these issues to the UAE government and have more of an impact on Billy’s case than a single petition to free Billy”.

Baroness Janet Whitaker and Andy Slaughter, MP have called on Rt Hon. Dominic Raab, MP to increase FCO travel warnings to the UAE, as well as open discussions on possible sanctions after British National, Albert Douglas, was arrested and subjected to human rights violations in UAE prison. Lady Whitaker and Mr Slaughter released a letter requesting the urgent diplomatic assistance of Secretary of State, Rt Hon Dominic Raab, MP. They have asked him to speak with his counterpart in the UAE to brin

The UAE’s Ambassador to the UK has recently relayed that he’s “surprised to hear of the mistreatment of British prisoners”, after Albert Douglas’s case was raised by MP, Felicity Buchan who is also the representative for Billy Hood. Stirling added “Albert Douglas was hospitalised to repair his dislocated shoulder and broken bones after being beaten by prison authorities. He is in prison for bounced cheques, despite forensic evidence exonerating him.” Albert Douglas was asked to make a propaganda video thanking Dubai ruler, HH Sheikh Mohammed Al Maktoum and the prison guards for his “good treatment”.  Princess Latifa recently posed for photographs and claimed to be happy and free after accusing the ruler of her own abuse and torture during her dramatic escape.  The propaganda videos requested of Albert Douglas raised concerns as to the legitimacy of Latifa's latest 'holiday' photos.

With so much compelling evidence of human rights abuses, unfair trials, forced confessions and even torture, it is time the British government fully explained the risks involved in traveling to the UAE, but they seem more interested in protecting their friendships with wealthy diplomats in the country but as Wolfgang Douglas says, “at what point does the foreign office become liable?” Queen's Counsel has advised Detained in Dubai that, in fact, they are liable.
What will the Foreign Office do to help?  The following video explains all:
The EU Parliament has recently voted to boycott Dubai's expo based on human rights concerns:

Billy’s mother Breda has appealed to Sheikh Mohammed to have compassion on her boy, “Anyone who has ever known Billy has known he is a good boy and is the strongest advocate against drugs. He cares for his family, his friends and his sport. We have been torn apart because of his friend’s actions and we beg you, please help our boy”.
Billy's best friend Alfie along with father Alex, arranged a demonstration at Parliament Square on Saturday calling for justice.  See video footage here:

FCO’s dark alliance with the Emirates comes to light after repeated abuses of British nationals abroad.